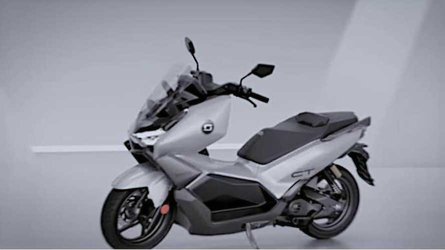 Electric scooters, once range and charging issues are sorted out to most people’s satisfaction, make a ton of sense. In places where commuting on scooters is a way of life, why wouldn’t you want a solid, reliable electric model? If it’s one with swappable batteries that you can bring inside to charge, so much the better.

Thing is, people who commute on scooters every day also might want to carry things with them. For at least some of these riders, that’s where electric maxi-scooters would make the most sense. So far, BMW has risen to the electric maxi-scooter call with the 2022 CE-04, but it’s not exactly inexpensive. Its design is also miles away from everything else, so it’s also likely that you either absolutely love it, or you can’t stand it.

What if you’d love an electric maxi-scooter that looks more like current combustion models, only cooler? We don’t know for sure if that was the design brief the folks at Super Soco followed when crafting the CT-3, but that’s definitely what we’re getting on first glance at its aesthetic qualities.

The thing about a maxi-scooter is, all that bodywork is extremely useful for covering up any messy bits that OEMs want to hide. It’s not like a naked bike that way—or even like a smaller-displacement scooter. This design philosophy works equally well for both combustion and electric maxi-scooters, as it turns out. Most batteries are pretty boxy-looking, but if you’re going to hide them under a bunch of plastic bodywork anyway, who cares?

According to Motorrad, the CT-3 boasts around 18.6 kW of power, equivalent to around 25 horsepower. Claimed top speed is 125 kilometers per hour, or around 77.6 miles per hour—making it ideal for highway commutes. Range is estimated at 170 to 180 kilometers on a single charge. That’s between 105.6 and nearly 112 miles, which seems pretty reasonable for its purpose. It packs a 7.2 kWh battery, which Super Soco says charges in just three hours.

Super Soco unveiled the CT-3 at the 19th annual China International Motorcycle Trade Exhibition, which ran from September 17 through 20, 2021. The company, which is a joint Chinese-Australian venture, sells its electric motorbikes in many countries around the world, including the U.S. Maxi scooters have historically been more popular in Europe, but it’s currently not clear what markets can expect to see the 2022 CT-3 in the near future.