With 28 inches of suspension travel, a new chassis, active shocks, and 181 hp, you could be forgiven for thinking the 2022 Polaris RZR Turbo R represents the top of the pile for Polaris. (Polaris/)

When Polaris left RZR Turbo S off the list of models for 2022, we knew it could only mean that the company was cooking up something truly special. No way it would abandon the platform that took RZRs into the performance stratosphere after so much success.

With today’s announcement of the new Wide Open line of RZRs, flagshipped by the incredible RZR Pro R, we’ve been proven right. The 2022 Polaris RZR Turbo R is a full scale rework of the storied Turbo moniker, and shares more than a few components with its stout new brand mate. The Turbo R rides on the same 32-inch Maxxis tires and 15-inch aluminum wheels as its big brother, the Pro R. (Polaris/)

To wit: The one-piece frame and entire front suspension are common between the Pro R and the Turbo R. They also share the same 74-inch stance. That means the Turbo R has 27 inches of suspension travel, boxed steel front A-arms, three-piece stabilizer bars and Fox 3.0 Live Valve X2 Internal Bypass shocks. You can also get the Turbo R with Polaris’ Dynamix DV active suspension setup. The new suspension holds on to the same 15-inch, five-lug alloy wheels wrapped in 32-inch tires as the Pro R.

Out back, the Turbo R gets slightly less aggressive kit than the Pro R. There are tubular trailing arms with boxed gusseting, a proprietary adjustable toe link, high-clearance radius rods, stabilizer bars, and Fox 3.0 Live Valve X2 Internal Bypass shocks. That all combines for an insane 28 inches of rear wheel travel. At a massive 74 inches wide, the Turbo R will certainly be more suited to the wide-open spaces of the American West than the narrow woods of the East. (Polaris/)

To put it in perspective, the Turbo R has 6 inches more travel front and rear than Polaris’ previous halo model, the RZR Pro XP. Suffice it to say that the all-new Turbo R should be massively more capable than the outgoing Turbo S.

The engine in the Turbo R is the same 181 hp, 925cc ProStar parallel twin as is in the Pro XP. We tested a Pro XP 4 last year and were blown away with its capability and performance, so the Turbo R should be an absolute weapon. 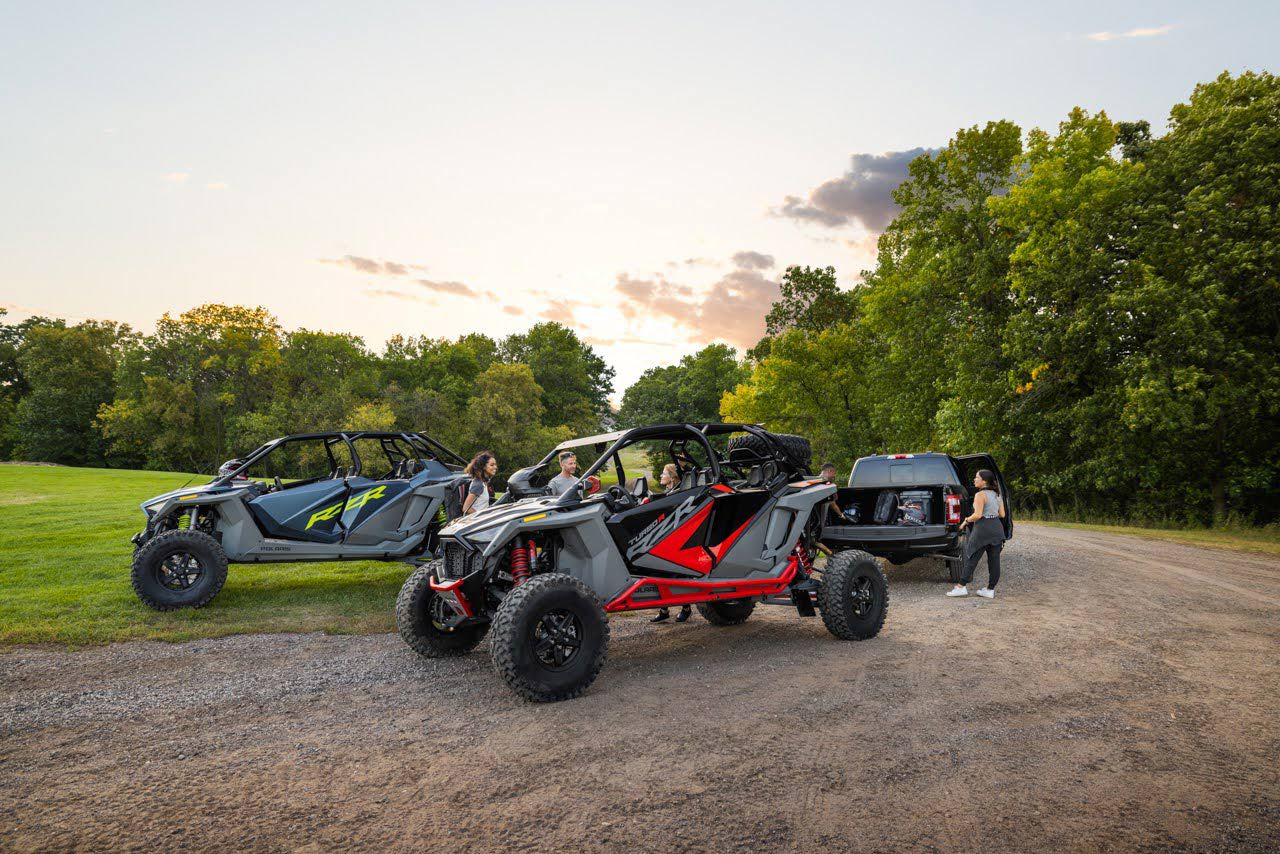 Pulling the melee down to a stop are three-piston disc brakes up front, and two-piston discs out back. And, yes, they are the same clamps as the 225 hp Pro R will have.

Inside, the Turbo R will be available with Polaris’ full suite of fantastic electronics, including Ride Command and a palette of audio options from Rockford Fosgate.

Given how much more luxurious, capable, and fast the new RZR Turbo R promises to be than its predecessor, it beggars belief that it won’t be close to the company’s most capable rig. But, this is the world we live in, and it’s one in which Polaris has thrown down a serious gauntlet.