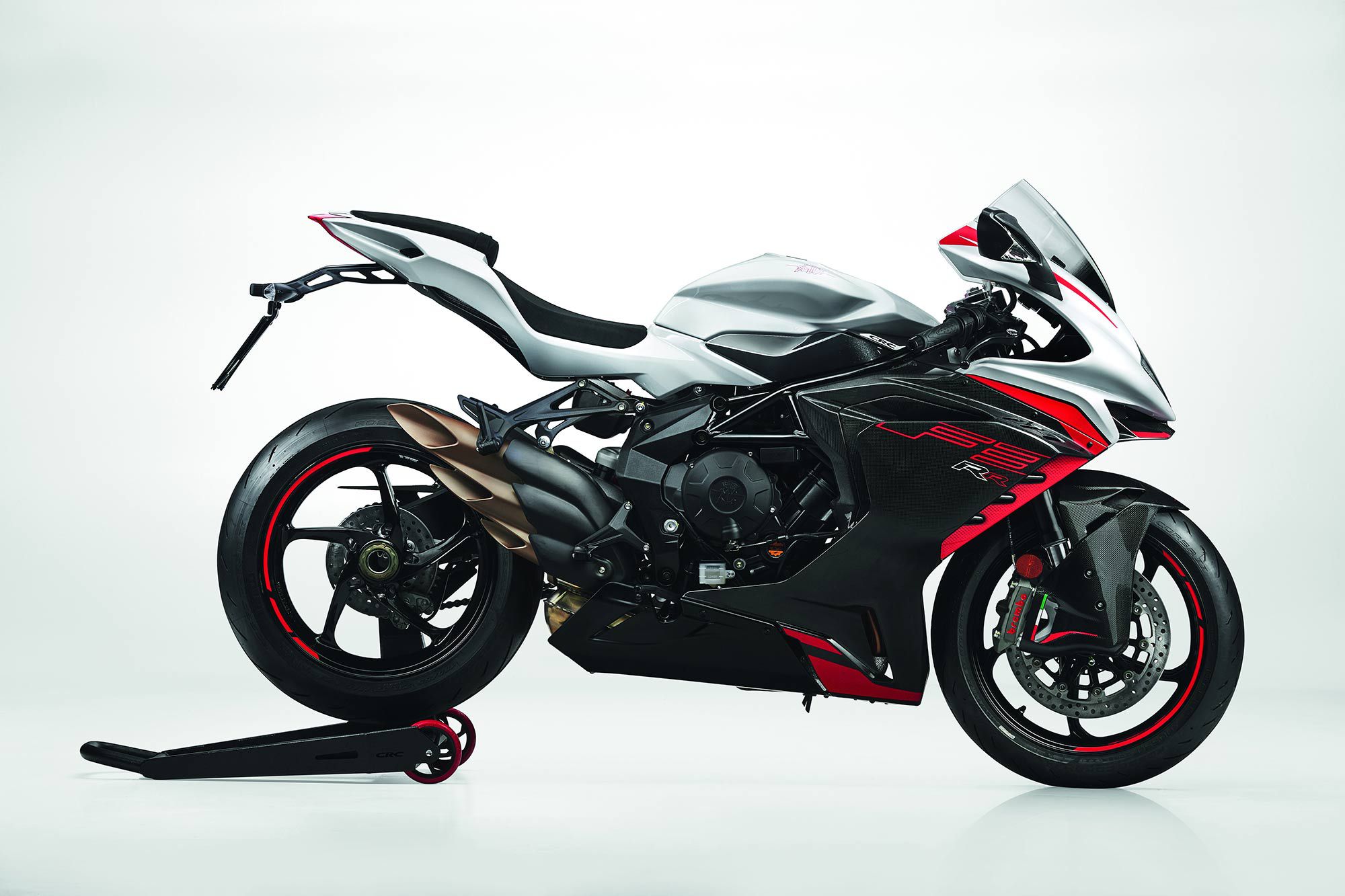 MV Agusta has a vast amount of experience gathered in World Supersport and Moto2 racing, and now the company is pouring it into its F3 RR, a machine with a direct connection to those racebikes. The 800cc triple is the sportiest machine in MV’s lineup, the motorcycle that preserves all the concepts Maestro Massimo Tamburini developed.

Originally, when Tamburini designed the F3, it was supposed to act as a smaller-displacement wingman to the top-of-the-line four-cylinder F4. But due to the F4′s long image crisis, it was the F3 that slowly but surely pulled MV out of the mire, until the F4 found its way and evolved into its present, powerful position.

Originally the engine was conceived as a 675cc unit, a displacement which would make it eligible to compete in the FIM’s cutthroat Supersport World Championship class. Now, though, MV makes only this 800cc version. It’s a logical evolution: The project is rather sophisticated and includes not only a balancing countershaft necessary to quell the triple’s primary-order vibration, but also a reverse-rotating crankshaft to reduce the inertial effects on steering. Compared to competitors in the class, these engines offer a lot of bang for the buck. 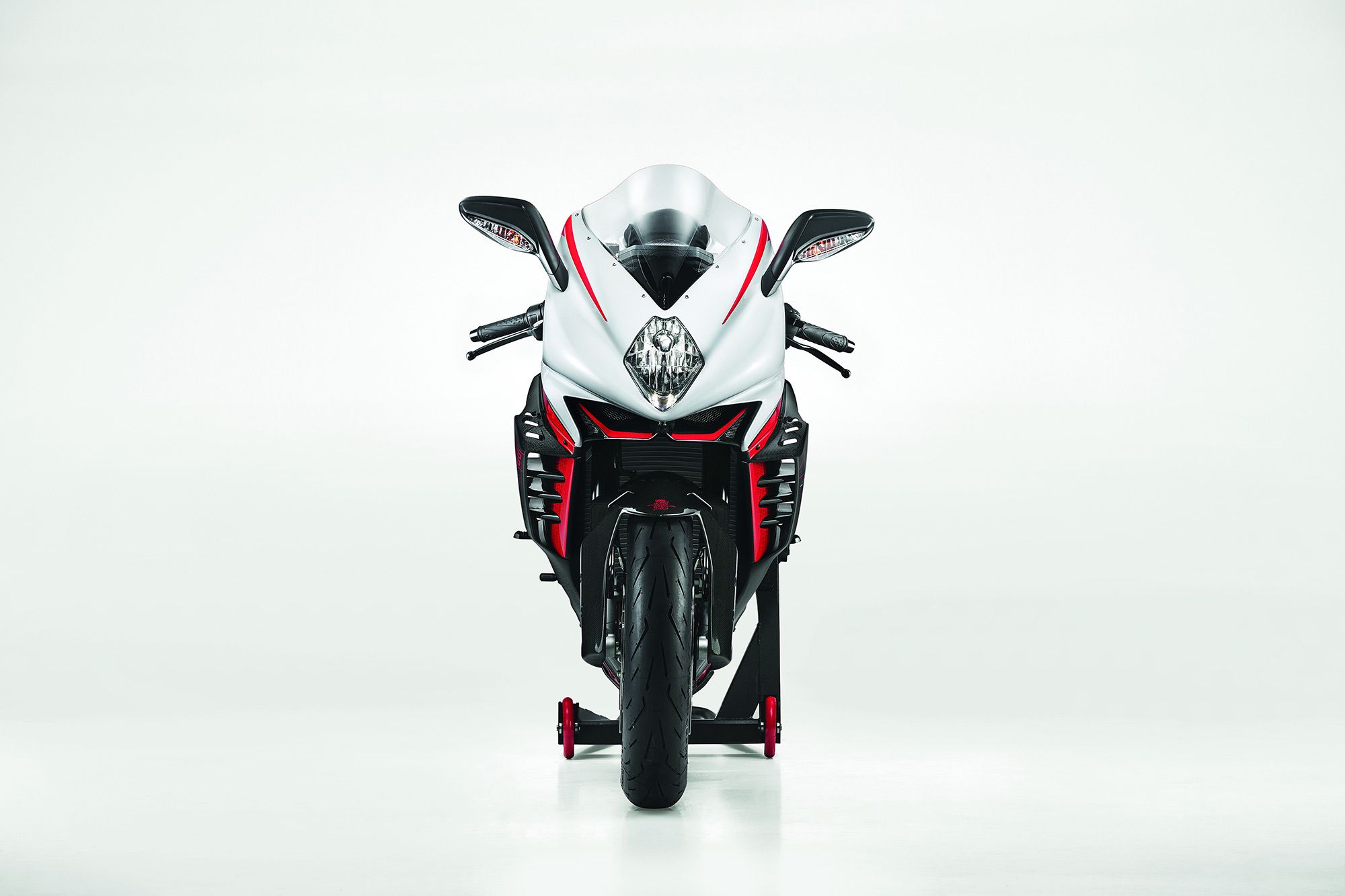 From the front, two additional new styling elements make themselves seen: the aero ducting under the headlight, and the multiple wing/ducting on each side of the fairing. Both have the same goal: to improve the bike’s downforce at speed. (MV Agusta/)

For 2022, MV now tags on the “RR” suffix to the F3 model name, representing a radical evolution—and it shows. The classic full-coverage racing fairing now includes additional carbon fiber panels and three short winglets. MV claims these generate 18 pounds of downforce at 150 mph, while acting as a very solid connection between the new panels and the basic fairing. The new aerodynamics (including a new front fender) have been thoroughly wind-tunnel tested, and the airflow they generate also benefits rider comfort and engine cooling. The new fairing’s nose also includes a small spoiler that organizes the airflow inside the cockpit. And while downforce usually adds to a bike’s aerodynamic drag, MV claims the new F3 RR has a top speed in excess of 152 mph.

The chassis shares all the evolutionary upgrades that MV’s technical team, led by Dr. Brian Gillen, has developed and applied on Agusta’s other three-cylinder models. These include the complete redesign of the thick aluminum frame plates that clamp the rear engine mount, locate the single-sided swingarm’s pivot, and connect to the frame’s steel-tube trellis structure. The design increases torsional rigidity and lateral flex substantially, making the bike both more precise and responsive. The F3 RR chassis is very compact and race oriented, with a 54.3-inch wheelbase, 23.5 degrees of rake, and 3.9 inches of trail with 30mm fork offset. 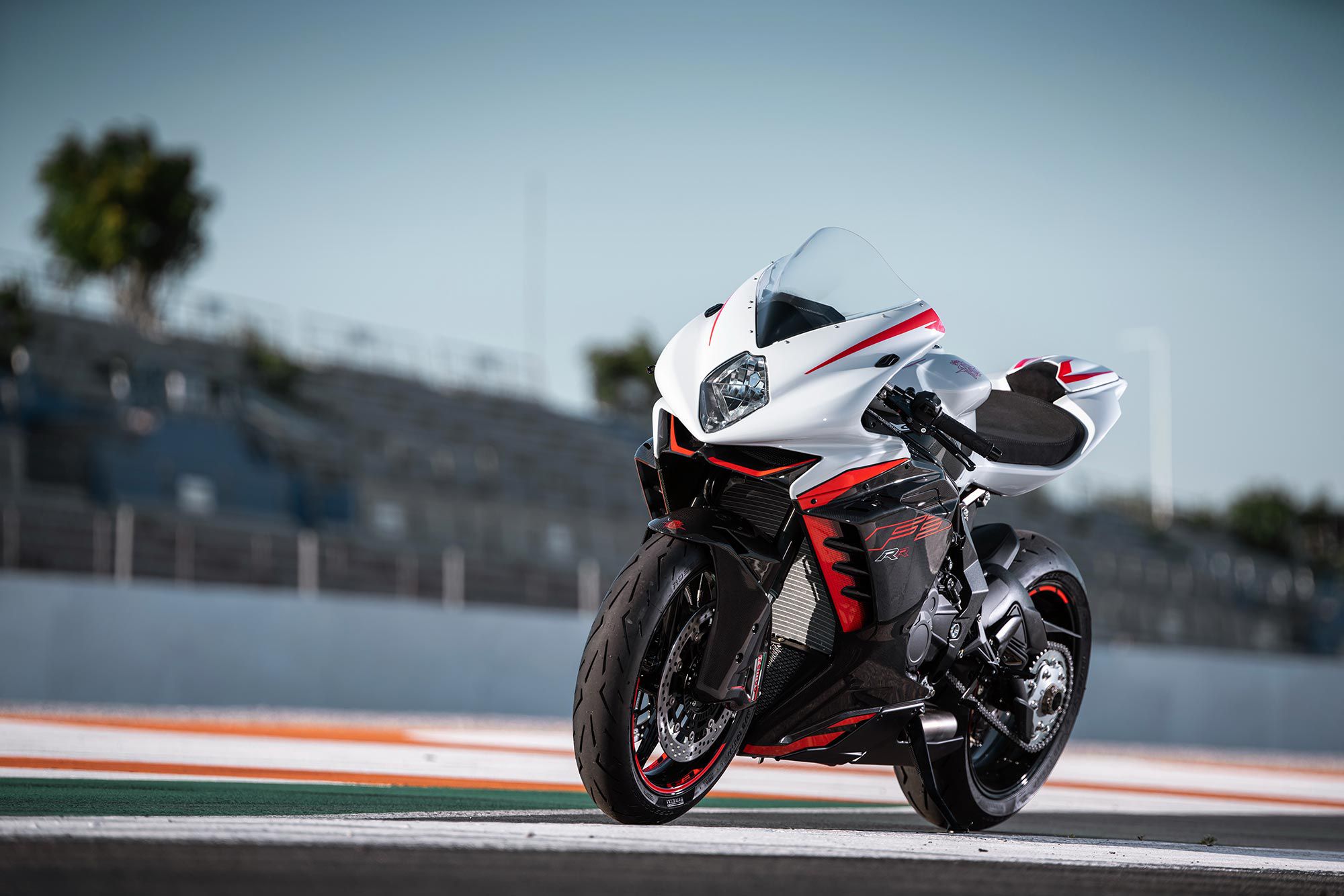 The F3 RR is packaged with a short wheelbase and classically steep chassis rake, similar to other bikes we’ve seen in MV Agusta’s lineup this season. It knows what works, and it sticks with it. (MV Agusta/)

The fork itself is a 43mm Marzocchi male-slider unit, while the rear shock absorber is by Sachs; both are fully adjustable. The F3 RR rolls on 120/70-17 front and 180/55-17 rear radials. Braking is full Brembo with twin 320mm rotors and Monoblock four-piston calipers up front and a single 220mm rotor with a two-piston caliper at the rear. 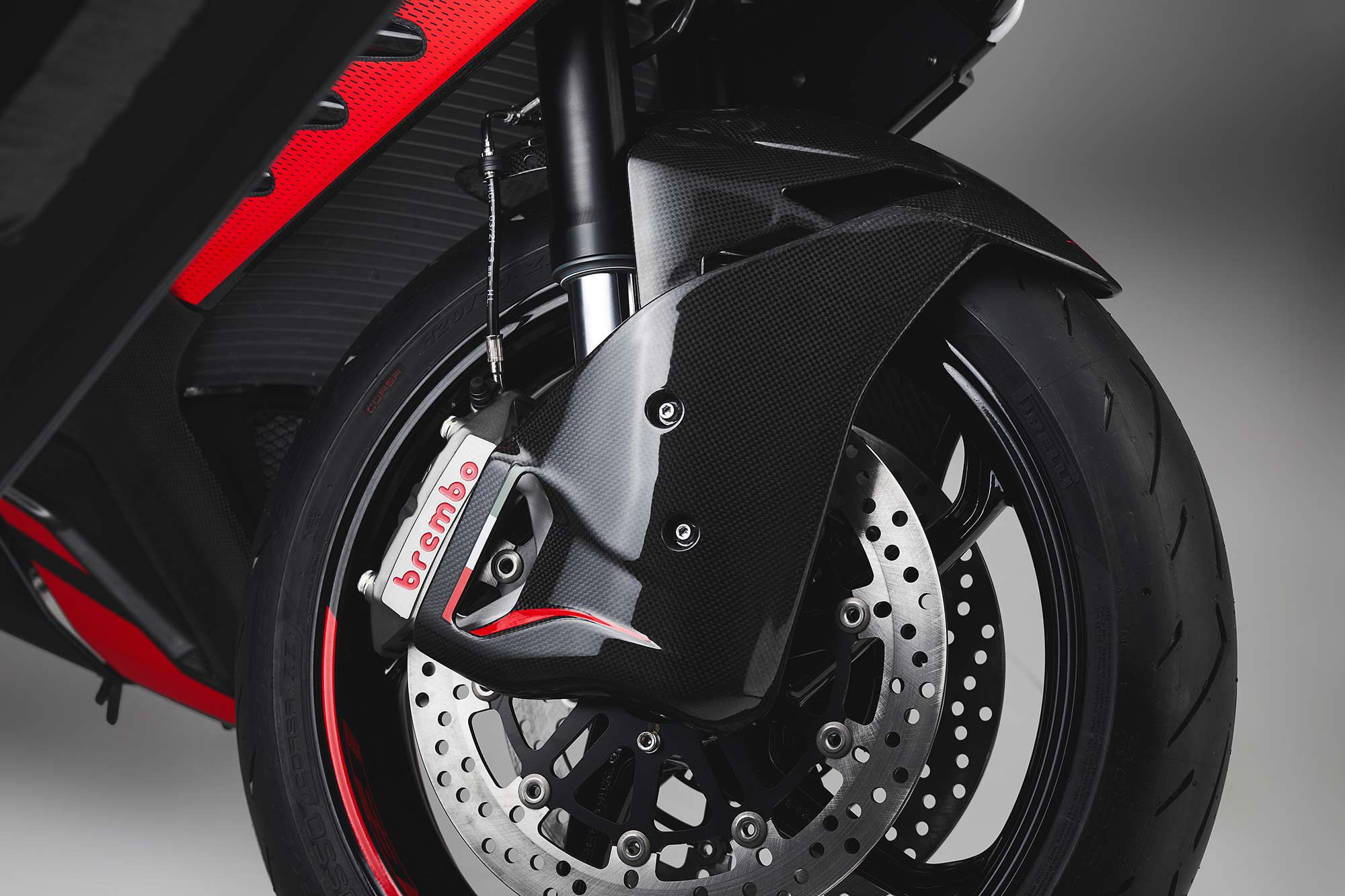 Why doesn’t everyone do this? Radially mounted four-piston Brembo brakes in a Monoblock caliper blend seamlessly into the MV F3 RR’s new carbon fiber front fender. The fender adds some serious aerodynamic improvement to the bike, and is a standout looker too. (MV Agusta/)

The RR’s braking is overseen by Continental MK 100 ABS system, a key component in a powerful electronics suite based on the six-axis e-Novia IMU, also a part of the MV’s traction control and wheelie control. The powerful IMU also dialogs with the engine-management ECU to control power delivery when exiting corners. A 5.5-inch TFT display provides all the relevant information.

The F3 RR’s engine is the most powerful version of MV’s triple, rated at a very substantial 147 hp at 13,000 rpm and 65 pound-feet of torque at 10,100 rpm. Those numbers are impressive, considering the engine also conforms to Euro 5 emissions standards. Reducing internal frictional losses plus the addition of a completely new exhaust system and catalyzer are the reason why, as well as fuel injectors with 0.5 bar more pressure and revised cam timing.

Need more power? MV offers a rather attractive, road-legal racing kit which boosts the power to 155 horses at 13,250 rpm. The kit includes an Akrapovič titanium/carbon exhaust system that also helps lower the bike’s dry weight from 381 pounds to 364 pounds.

All in all, the new MV Agusta F3 RR is a real “day at the track” machine, lean and mean, accurately finished with extensive use of carbon fiber. Price in the USA, unconfirmed at press time, will be announced soon. 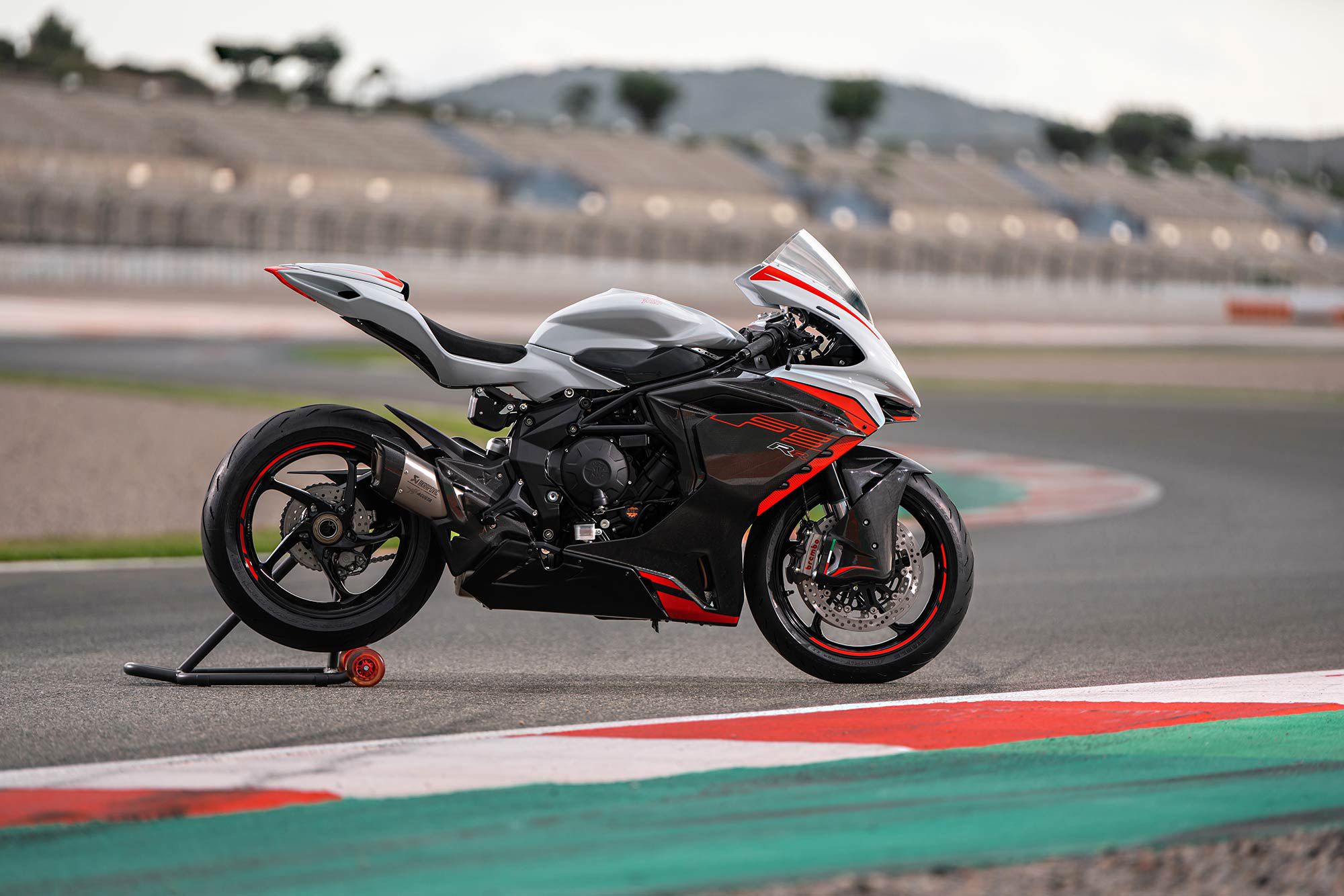