The KTM RC 390 gets a complete redesign for 2022, with a new frame, TFT color dash, and electronics being the headline features. (KTM/)

It’s been eight years since KTM first evolved its sportbike range to include the single-cylinder RC 390 and apart from a handful of minor tweaks it’s been largely unaltered since then, making this complete redesign for 2022 the most significant in the model’s life.

It’s a rework that’s been a long time coming. Spy shots of revamped versions of the RC 390, along with the physically identical but smaller-capacity RC 125 that’s offered in Europe, have been emerging since as early as 2019, and we got shots of a near-final version of the 125 model back in February. Now KTM has finally decided that the development process is complete, and the bike is ready for its close-ups. 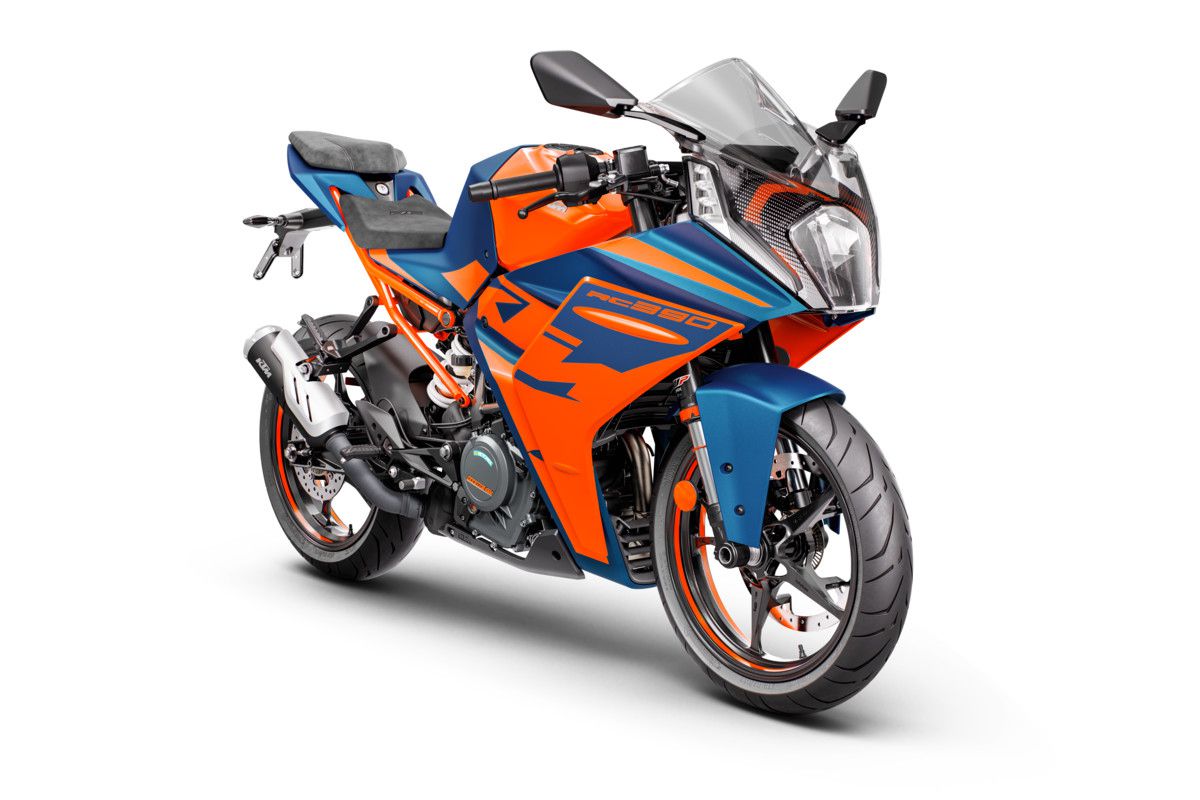 Styling is the most noticeable change, with a more aerodynamic approach seen up front and in the side panels. The bike is also larger than before. (KTM/)

The new 2022 model’s styling is the clearest departure from the past. Where the old RC 390 was distinctive, with an unusual face including a vestigial beak below a pair of deeply inset headlights—perhaps a nod to the firm’s adventure and motocross bike roots—the new model targets aerodynamic efficiency, using lessons from KTM’s successful Moto3, Moto2, and MotoGP development programs.

Like the original RC 390, the nose is almost entirely made of clear plastic, eliminating the need for a separate windshield, but instead of being inset the new bike’s headlight is flush fitting, as are a pair of boomerang-shaped running lights and turn signals blended into either side. The bike’s side panels are now dual layer, designed to direct airflow away from the rider, and KTM has taken the unusual step of making the bike larger than before, gaining aero benefits in the process. As well as being more efficient, the new design also needs fewer fasteners to keep it in place, making maintenance easier than in the past.

Related: New Small-Displacement KTMs Are on the Way 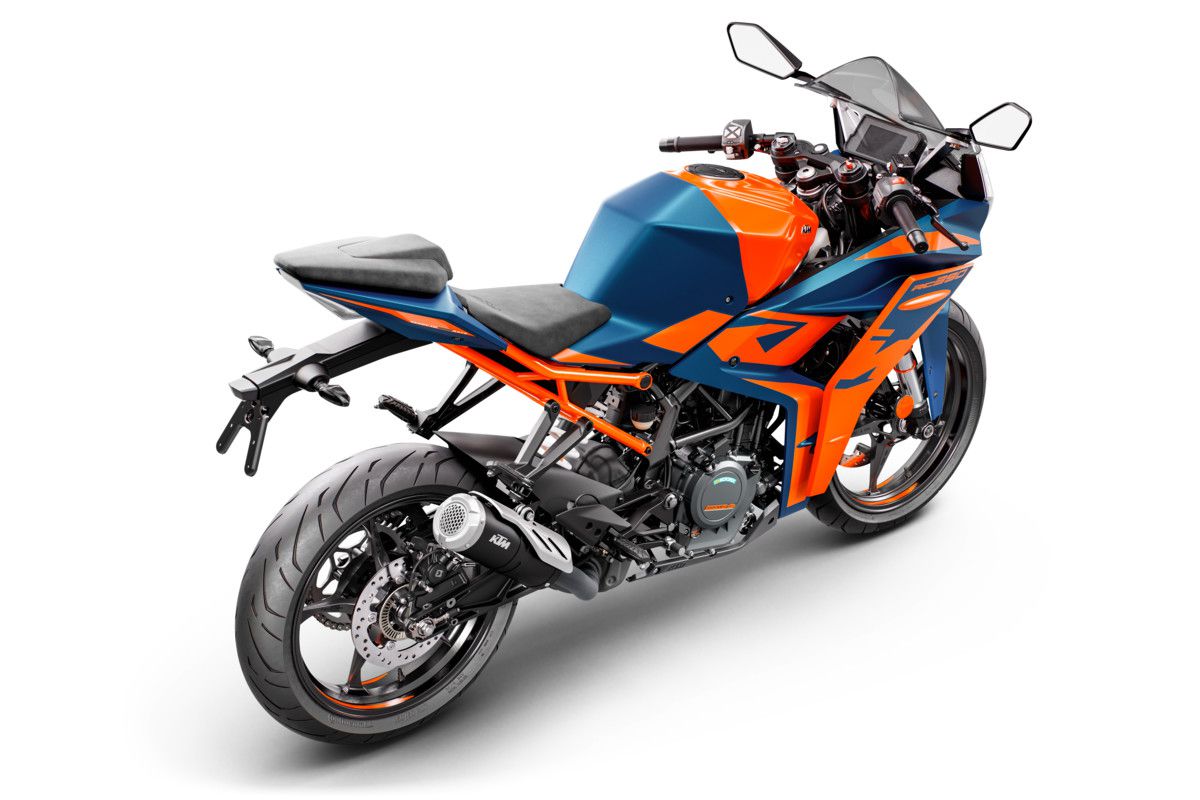 The frame is more than 3 pounds lighter than before, with a redesigned subframe and slimmer tail helping to trim mass further. (KTM/)

Although visually similar to the previous version, KTM says the frame is new, 3.3 pounds lighter than its forebear and featuring a noticeably redesigned subframe for the seat. Above that sits a slimmer tail, but a thicker pillion seat pad—adding comfort while reducing mass.

A new 3.6-gallon fuel tank sits ahead of an airbox that’s 40 percent larger than before, improving torque from the RC 390′s 373cc single, though power remains unchanged at 43 hp. The engine might be largely carried over from the previous model, but its control electronics take a huge step forward for 2022. The ride-by-wire now includes cornering traction control, thanks to an inertial measurement unit, and the ABS for the ByBre brakes (Brembo’s low-cost range) also works while the bike is banked over. 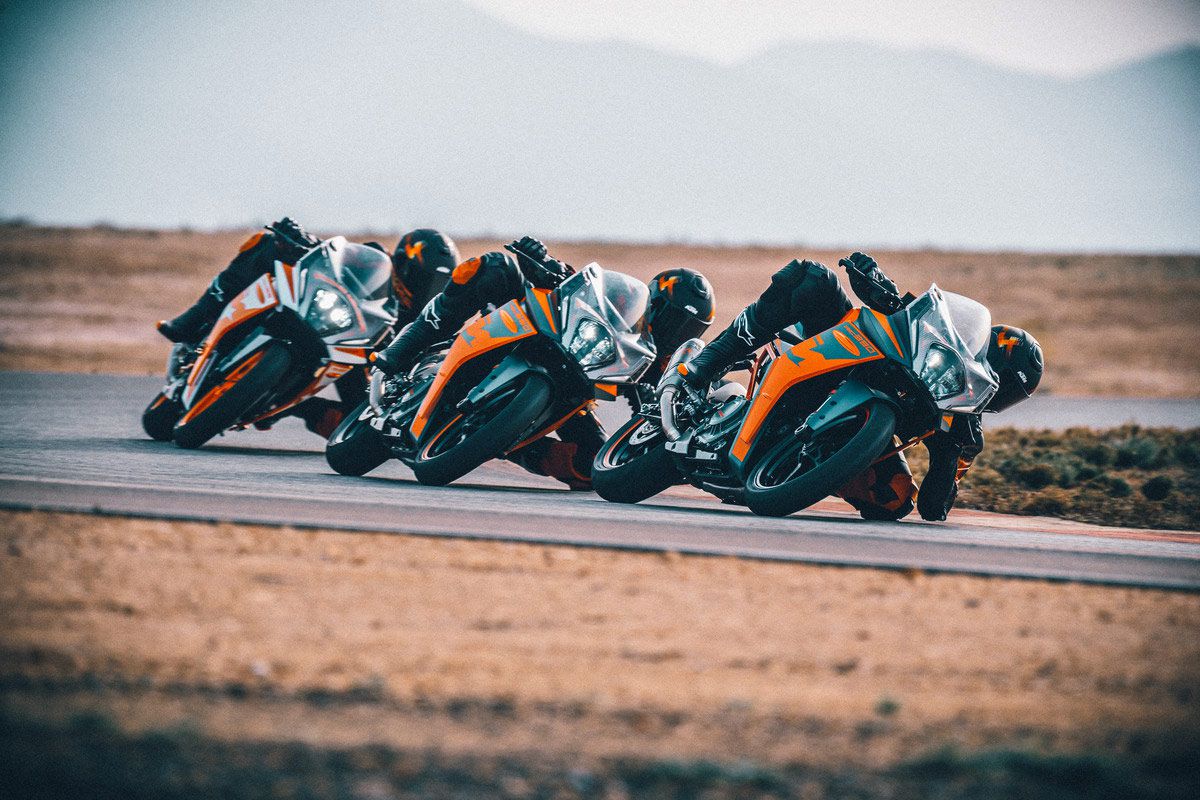 Although the engine is mechanically unchanged, it gains new electronics like cornering traction control and cornering ABS (as well as Supermoto ABS), managed by an IMU. (KTM/)

It might be a sportbike but the RC 390 gets KTM’s Supermoto ABS system, which adds a mode that disconnects the rear antilock system so you can slide into corners. The same setting also disables the rear-wheel lift control system so you can brake deeper into corners even if the back tire is off the ground, though activating the Supermoto mode does mean the ABS loses its ability to work when the bike is banked over.

Optionally, buyers can add KTM’s Quickshifter+ system to allow up- and downshifts without using the clutch or closing the throttle on upshifts. A new color TFT dash replaces the dated-looking LCD of the previous model and, as with so many new bikes, gives the RC 390 the ability to link with your smartphone for music and calls, with bar-mounted controls for both. New suspension comes in the form of adjustable WP Apex both up front and out back. Fuel tank is also new. (KTM/)

Given that the RC 390 doesn’t change out-and-out straight-line speed, it’s no surprise that KTM has concentrated on its ability in corners. The new 2022 model gets new suspension in that quest, with 43mm WP Apex inverted cartridge fork, complete with a wide range (30 clicks) of compression and rebound damping adjustment via easy-to-use thumbwheels on the fork tops. A hollow front axle reduces weight, along with new wheels that cut 7.5 pounds from the bike’s unsprung and rotating mass, promising a significant improvement in direction changes.

The rear shock, also a WP Apex unit, also offers rebound and preload adjustment, so despite its diminutive size the RC 390 has much the same level of adaptability as a full-size superbike.

Although the US market only gets the RC 390, the smaller RC 125 sold elsewhere features the same changes to the chassis and bodywork, albeit without the same level of suspension adjustability and losing the IMU-operated cornering electronics. 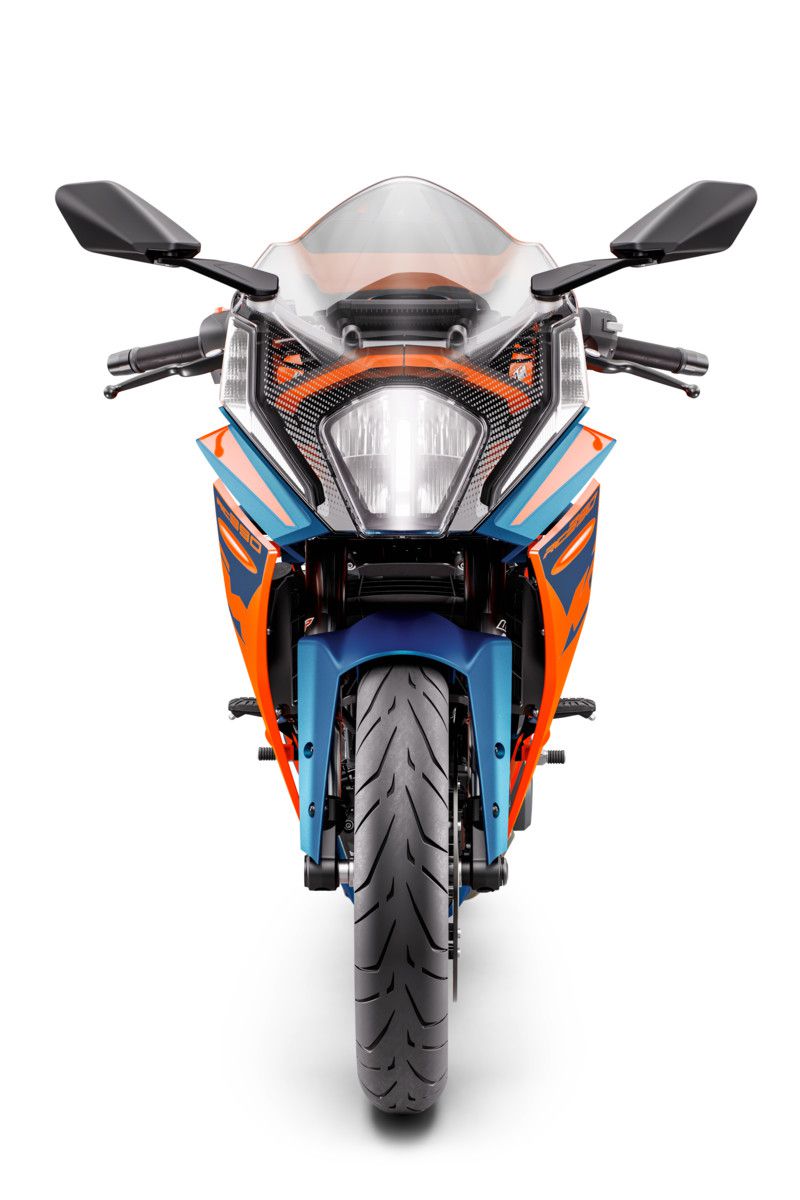 Running lights and turn signals are flushed into the nose/fairing, along with the headlight. (KTM/)

Rare Kannenberg Collection To Go To Auction This September