2022 King Of The Baggers Championship Starts At Daytona 200 Weekend 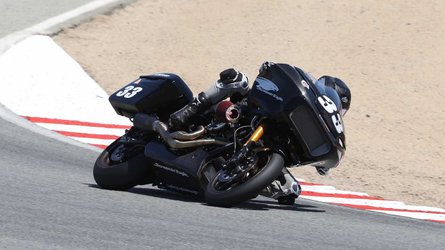 It may only be mid-September, 2021, but the folks at MotoAmerica and Daytona International Speedway are already hard at work planning their 2022 events. The 80th edition of the Daytona 200 Weekend is currently on the calendar for March 10 through 12, 2022. Some changes are in the works, with one of the most important ones being that MotoAmerica is bringing its King of the Baggers series to compete on Daytona’s inimitable High Banks.

In 2022, MotoAmerica and Daytona International Speedway are teaming up to co-host the weekend’s events, to bring a spectacular race weekend like no other to the historic Daytona International Speedway circuit. Events to come include the opening rounds of the 2022 King of the Baggers Championship and MotoAmerica Twins Cup, in addition to the 2022 Daytona 200 main event.

With MotoAmerica’s administrative involvement, it’s important to note that the 2022 Daytona 200 will not be considered as part of the 2022 MotoAmerica Supersport Championship. Instead, it’s being run according to a new set of rules based on the 2022 World Supersport technical regulations.

What does that mean? Among other things, the 2022 Daytona 200 will remain an “open tire” competition, which is exactly what it sounds like. Instead of having a single tire supplier for all bikes participating in the event, teams can use whatever tires they want, as long as they adhere to agreed-upon technical regulations.

Also, a whole bunch of middleweight motorcycles are eligible to participate. Triumph 765, Ducati Panigale V2, MV Agusta F3, and other bikes can race against the Yamaha YZF-R6, Suzuki GSX-R600, and Kawasaki ZX-6Rs that have dominated the field in recent years. Once again, the best riders in the world can throw their hats into the ring to compete for the minimum $175,000 purse and contingency package awarded to the 2022 winner.