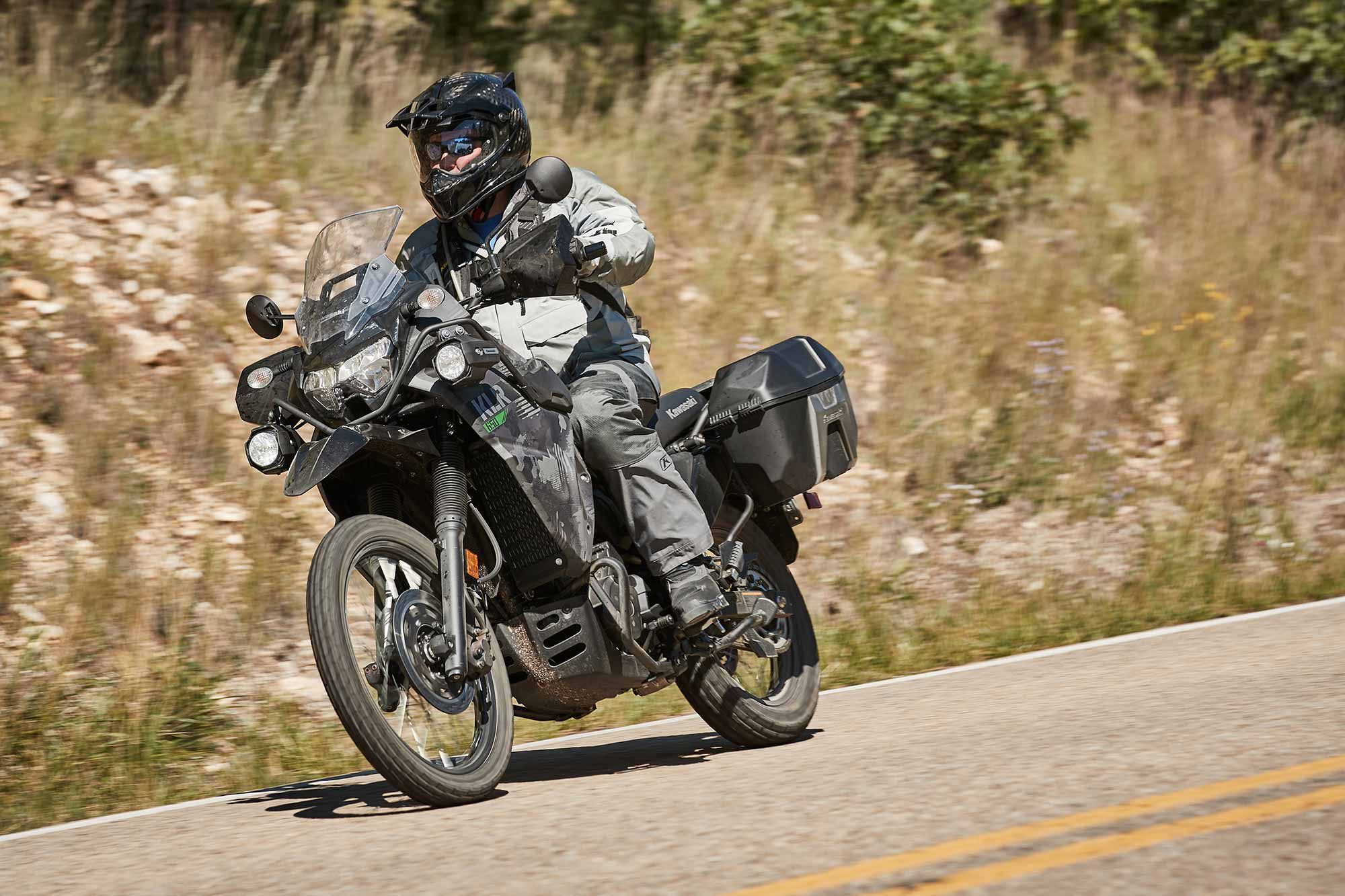 Kawasaki’s KLR650 gets fuel injection along with a host of other updates for 2022. (Kawasaki / Drew Ruiz/)

Everyone has a favorite KLR joke, from the one about the milk crate luggage to the one about the cheapest part being the nut behind the handlebar. At the same time, in the 34 years since the bike came out, if you saw a single headlight coming at you on an interesting dirt road in the middle of nowhere, chances were good that headlight belonged to a KLR. We’d venture to guess that no other model has racked up more miles off the beaten track. People who ride KLRs don’t buy the bike to look at. They buy it to ride.

From its genesis back in 1987, Kawasaki’s KLR was never intended as a narrowly focused tool. It was always the bike that did everything to some degree, even if it didn’t excel at any single task. This remains a pretty good description, and in the realm of adventure riding, that is absolutely a strength. When you roll out of the garage, you don’t know what road might beckon, but whatever looks appealing, you’ll be able to get there on this bike. 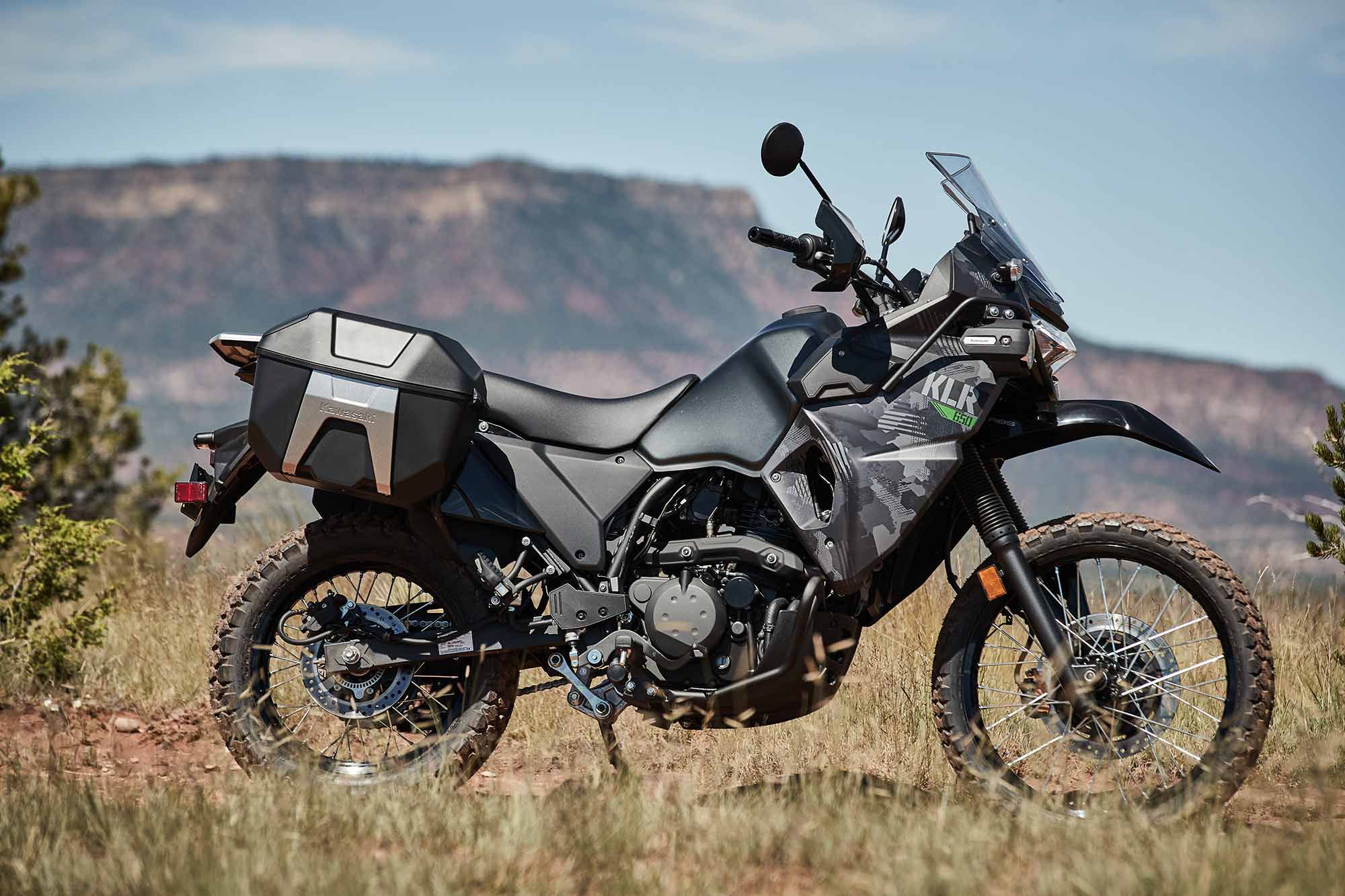 The product team reports getting conflicting feedback from existing KLR owners. On one hand, they wanted an updated bike; on the other, they told the team not to change anything. The resulting bike is pretty much what you’d expect: not a clean sheet design that attempts to remake the original platform, but an evolution that tries to build on its considerable strengths.

So for 2022, the KLR650 has a host of updates, the most significant among them being the addition of fuel injection. The chassis gets bigger axles, a 2mm-larger-diameter swingarm pivot, and firmer suspension damping settings. The swingarm is now 30mm longer, and the front end has 2 degrees more of rake (from 28 to 30) and about 8mm more trail. The brake rotors are bigger, with off-road-tuned ABS now optional. You can also get charging ports on the dash for your phone or GPS. 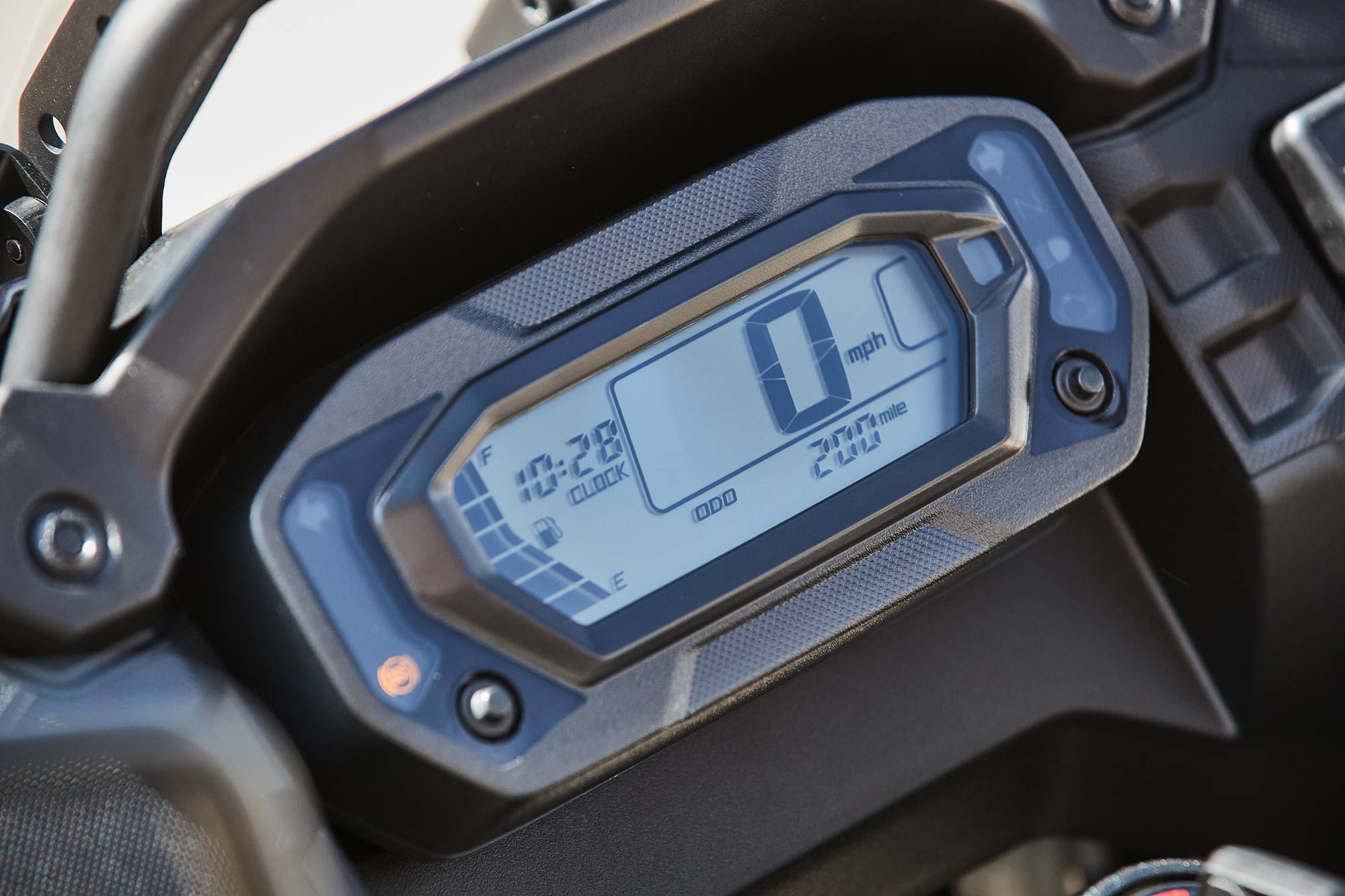 Virtually every cosmetic aspect of the bike has changed, from the digital dash—now including a fuel gauge!—to new bodywork. The windscreen has two positions, and the bike is available with luggage in the shape of side cases (small) and a top case (large). The bike is not light, starting around 450 pounds and ending up closer to 500 with luggage, ABS, and lights. Prices range from $6,699 for the base model without ABS to $7,999 Adventure ABS with side cases, fog lamps, power outlets, and frame sliders. The Adventure model tested here without ABS is $7,699. 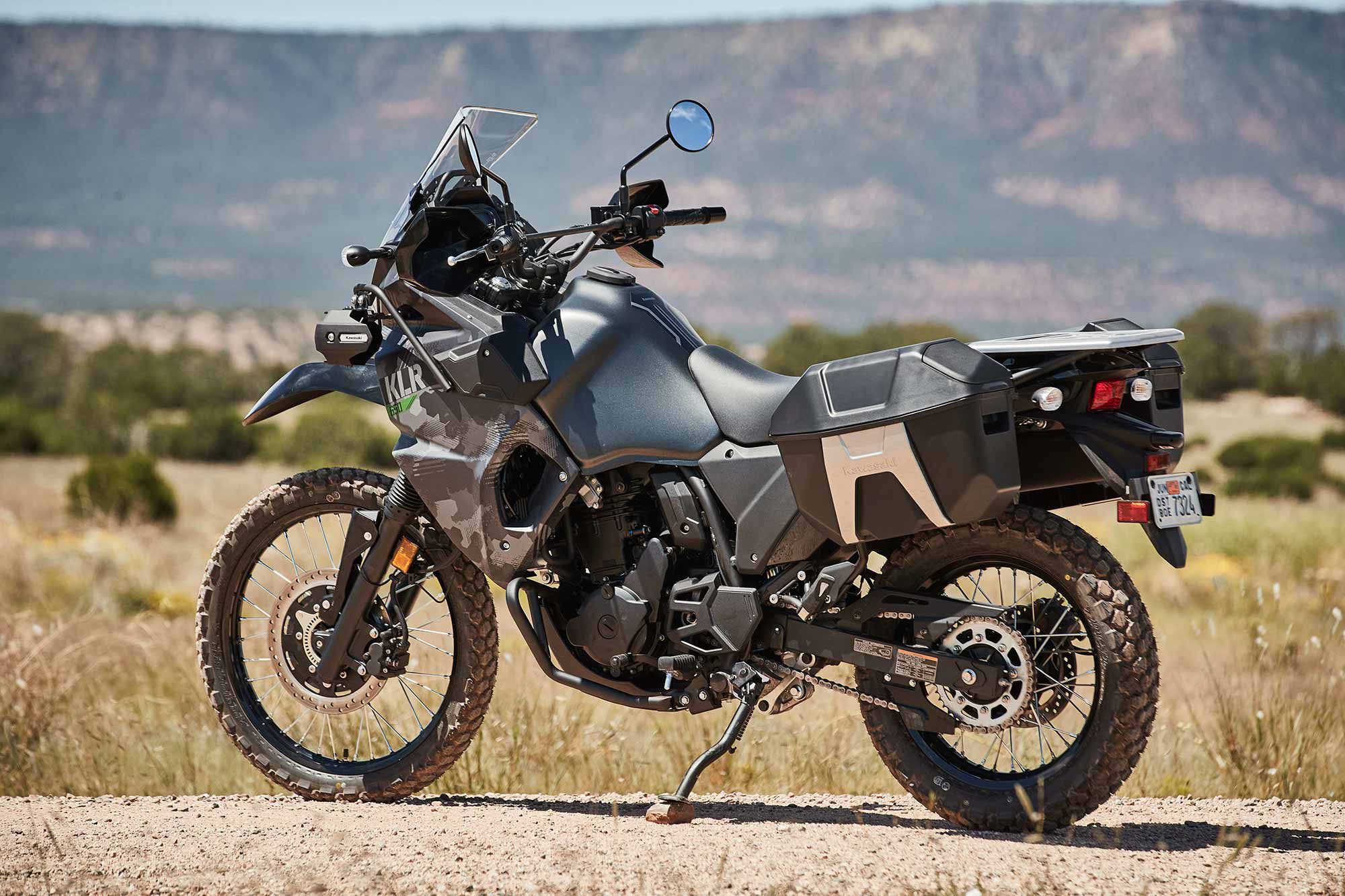 Kawasaki went to some trouble to arrange an interesting test ride for the bike. After all, the KLR is one of the brand’s bestselling models, and Kawasaki is very excited about it. The ride started at an old ranch in northern New Mexico and over the next two days covered every kind of terrain you could ever hope or expect to come across, from interstates to hidden backroads to graded dirt roads to even rougher trails.

First impressions were positive, though none of them were surprising. The motor starts easily, runs smoothly, and delivers power calmly, with a friendly torque band…but not much excitement. This bike still feels heavy and slow, because frankly, it is. But it’s also comfortable and undemanding.

Shortly after our ride began, we wound up on the interstate; while 80 mph is at the upper end of the bike’s legs, its air management is good and the engine has minimal vibration for a big single. The bars are now rubber mounted, and they are remarkably smooth for a big single on the road. The bike can seem wide when it is in the garage, but on the road the bulk of the fairing contributes to minimize the sort of buffeting which plagues many other, more expensive adventure bikes. 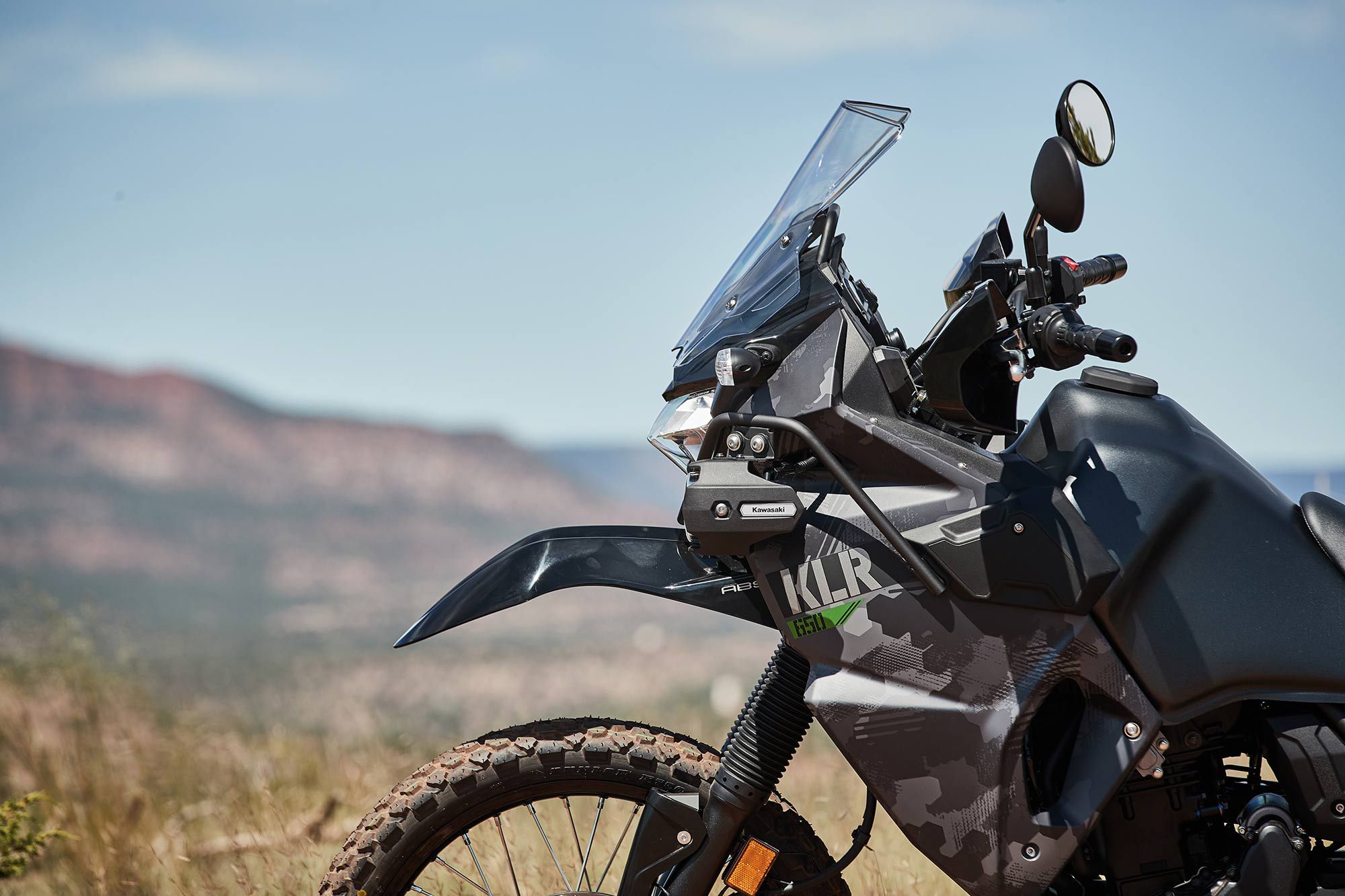 The chassis changes have successfully improved the bike’s feel. The old model had a tendency to follow pavement seams, but the changes Kawasaki made to stiffen the new bike make it more confident in line selection. The suspension is comfortable, if generally unremarkable, on the road; once onto dirt, it does a good job of absorbing low-speed bumps. Get too enthusiastic and it will bottom on even relatively mild obstacles, so it’s best to set a moderate pace. The new damping settings make the bike easier to ride by holding the bike up better than before, but they aren’t made for aggression. That’s in line with the rest of the bike; the engine isn’t playful, the brakes are adequate but not exactly sharp (border on feeling wooden), and the whole package communicates a preference for patience off-road.

Gravel fire roads are where the KLR650 is the happiest. (Kawasaki / Drew Ruiz/)

When the going gets slow, the bike even feels clumsy. It can accomplish technical challenges, but it doesn’t make them easy. This seems to be down to several factors: First, the clutch is vague, and combined with the tall first gear it’s often hard to know exactly how much drive you are going to get. Second, the bike’s heavy; the front end in particular feels overloaded. On one road, we dropped into some sandy sections; while I survived, it was not confidence inspiring. The OEM Dunlops are most likely partly to blame for this as well.

In slower and technical situations, you can feel the KLR650’s 483 pounds, and the rubber-isolated footpegs don’t provide a solid connection to the bike. (Kawasaki / Drew Ruiz/)

There is really only one serious criticism to make of the bike: The pegs and foot controls are terrible. The shifter is close to the peg and cannot be raised without hitting the case, so a motocross boot will not fit beneath it to make an upshift; and the peg position is forward, so the standing position is cramped. The pegs are covered in rubber, making them slippery when wet. They’re also rubber-isolated from the frame, so putting your weight on them by standing makes them flex down to the point where your foot wants to slide off. Fortunately, this complaint should be relatively easy to address in the aftermarket.

On the plus side, the fuel injection is a hit. The bike ran perfectly everywhere from about 6,000 feet of elevation to nearly 10,000. It has reasonable low-end torque, but it signs off pretty early; rev it and nothing much happens. True KLR purists will be disappointed to hear the exhaust no longer has the “tweety bird” chirp of the early models. 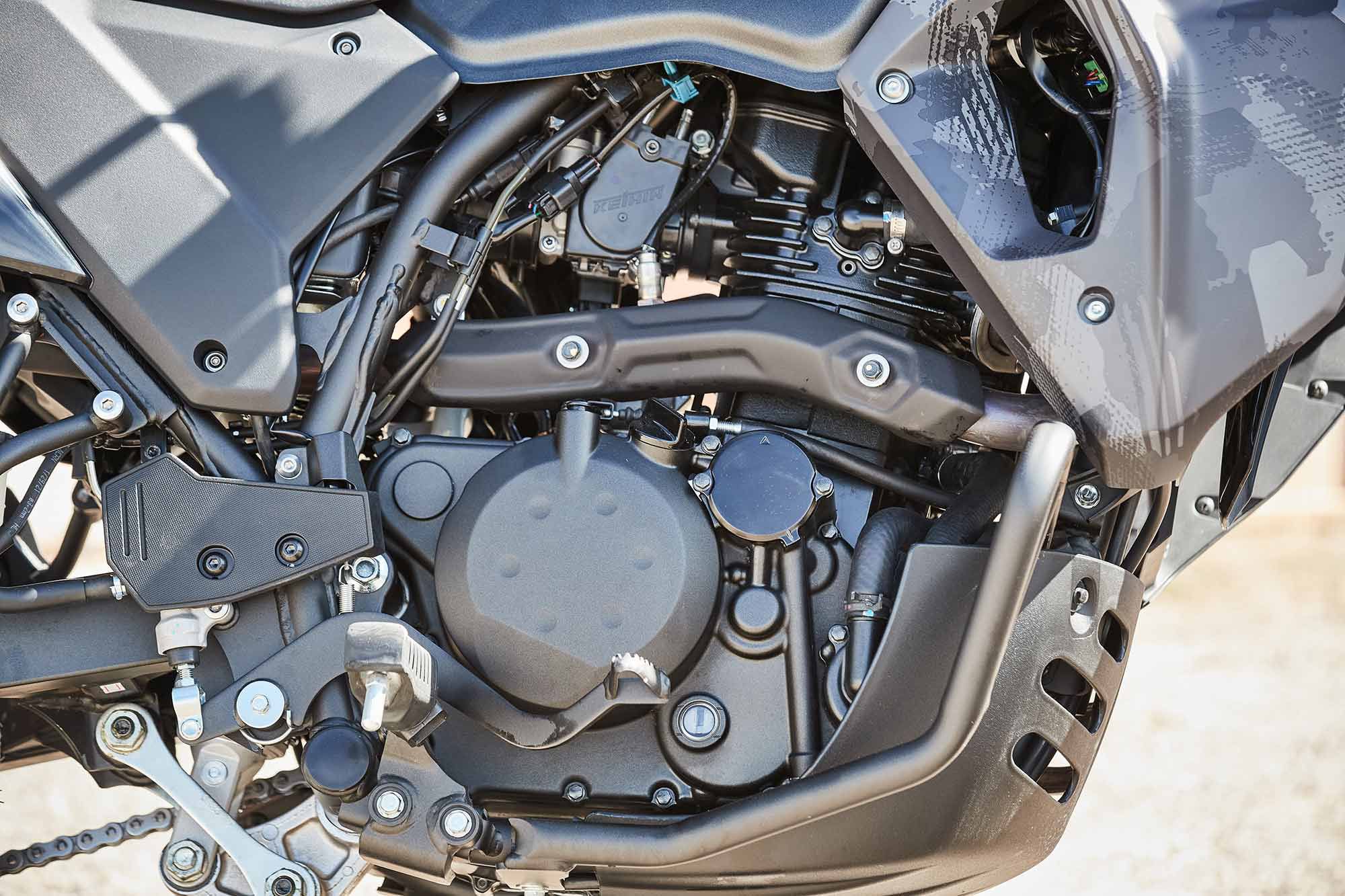 After 34 years, the KLR finally gets fuel injection, and it works well. (Kawasaki / Drew Ruiz/)

The KLR is also equipped with oldest-possible-school traction control: a heavy flywheel. The inertia in the motor makes spinning the tire difficult, so electronic aids aren’t needed. The gap from first to second gear is wide, but short of adding a sixth gear, there might not be a better answer. The ABS is good too; it’s not as intrusive as some systems, and accomplishes exactly what it is supposed to.

Our assembled group, being motojournalists, spent a lot of time chasing each other at wide-open throttle. We all remarked on how gracefully the bike accepted this treatment; some bikes don’t like to be abused like this, but the KLR doesn’t seem to mind at all. Which is good, because you’ll be stretching the cable with regularity if you want to make a pass. The bike will gamely get it done, but you’ll need to have a plan and cross the dotted lines with a head of steam. Abuse or cruise—the KLR650 will take either approach without complaint. (Kawasaki / Drew Ruiz/)

In summary, the KLR is everything it should be, if perhaps not quite all it could be. Look at it this way: From a statistical standpoint, basketball teams are rewarded for having superstar players; conversely, soccer teams rely on every position to make goals and therefore prioritize avoiding weak team members over seeking standouts. The KLR, therefore, is a soccer-team bike. It doesn’t have any superstar features, instead taking its strength from a lack of weaknesses. It’s fine on the road, even if it is slow. It’s fine on dirt, even if it is heavy. It can get up a trail, it can go down an interstate. You can ride it alone, you can take luggage, you can take a friend, and while it will be outstanding at none of these things, it will do all of them. And it will do them at a lower price than anything comparable on the market. This bike is about options rather than singular excellence, including the option to buy a whole lot of gas and tires with the money you save by buying it. 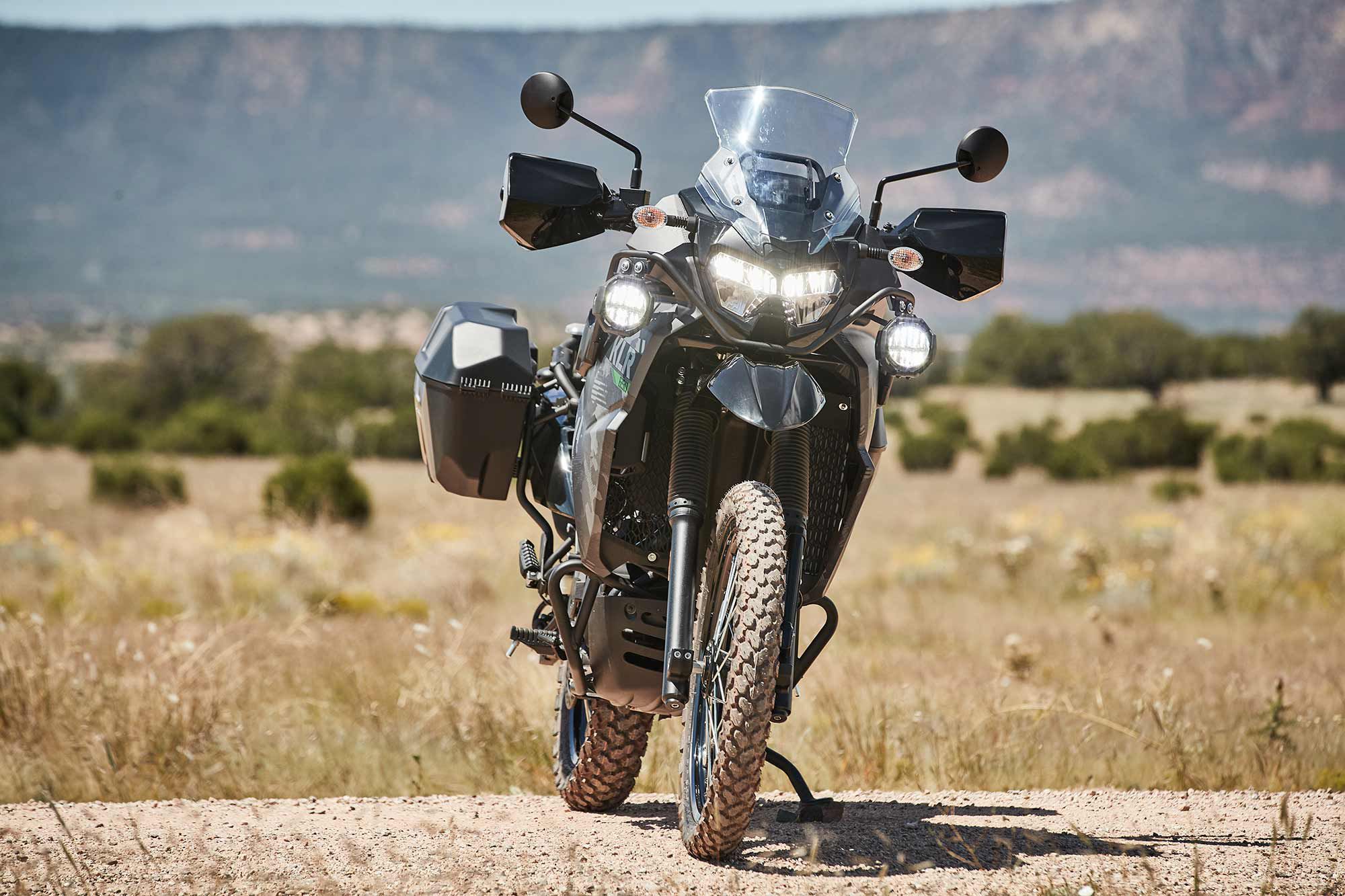 While the KLR650 doesn’t have any standout features, it doesn’t have many weaknesses—just what is needed from a trustworthy adventure companion. (Kawasaki / Drew Ruiz/) 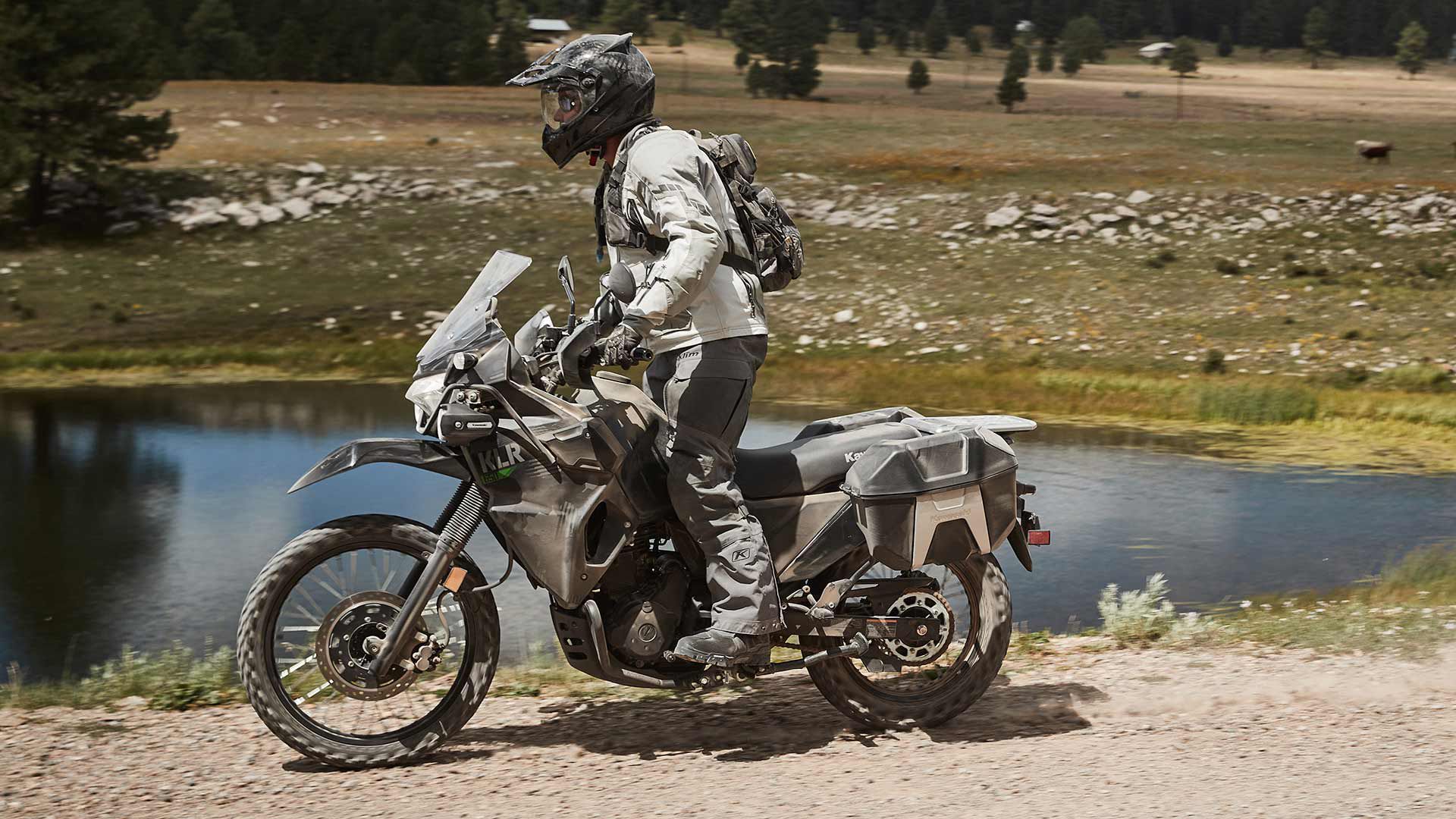 Kawasaki has managed to update the KLR650 without losing that do-it-all character that has made it a success for the past 34 years. (Kawasaki / Drew Ruiz/)

Twenty Not Out: A Honda XR100 two decades in the making