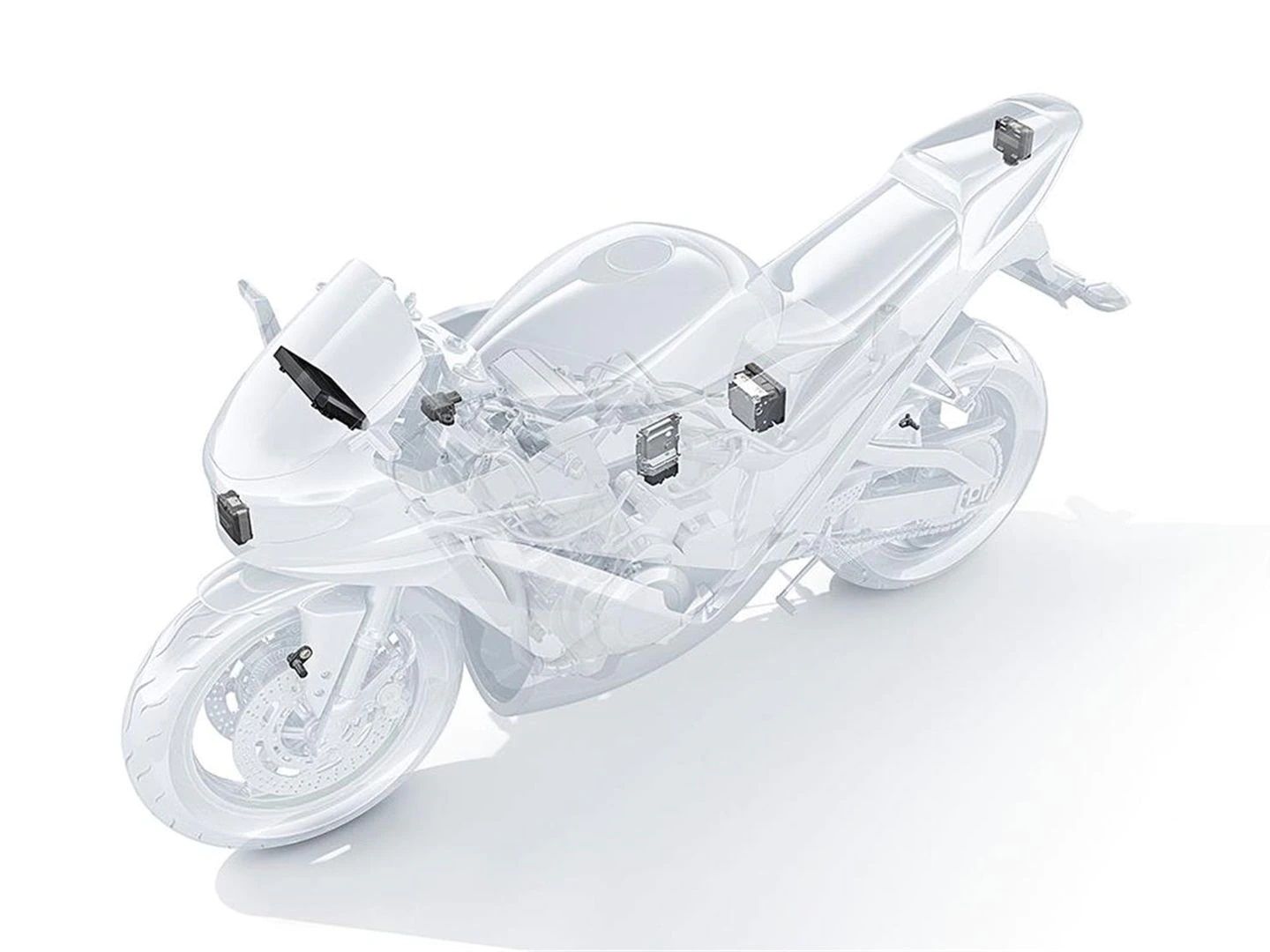 Kawasaki will use a Bosch radar system on upcoming models including the H2 SX, and now we know where the rear unit on that bike will be. (Bosch/)

Back in 2019 Kawasaki announced a deal with Bosch to use the German company’s front and rear radar system on future bikes, giving the firm access to adaptive cruise control and blind spot monitoring ahead of its Japanese rivals. We’ve already seen that the front radar is to appear on the 2022 H2 SX sport-tourer and now a new patent reveals how Kawasaki is hiding the rear radar on the same bike. 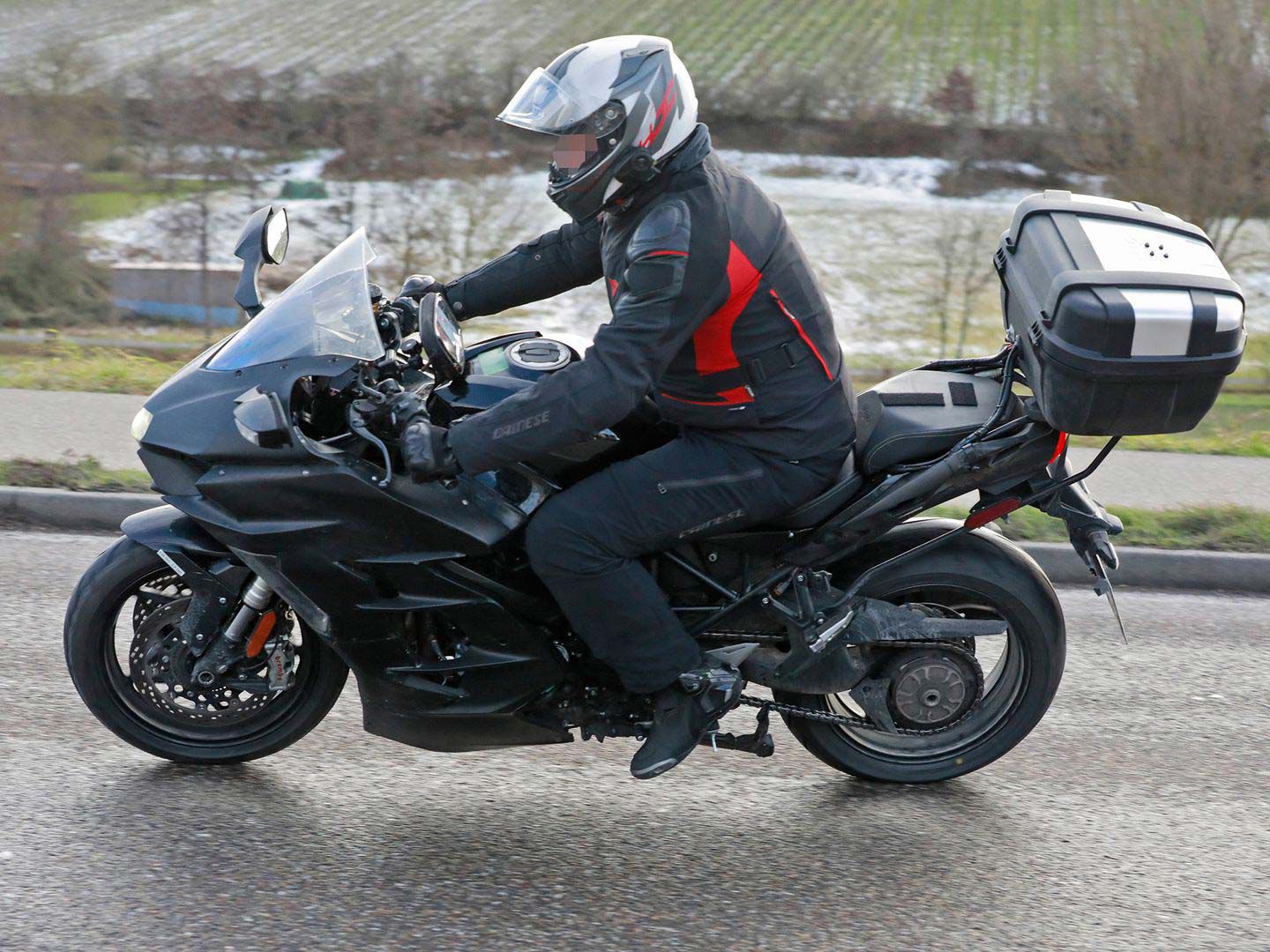 Earlier spy shots showed the front radar but gave away no clues about the rear. Turns out it was hidden in plain sight. (S. Baldauf/SB-Medien/)

When spy pictures of next year’s H2 SX first emerged back in February, it was instantly clear that the bike’s updated styling left space for a front-facing radar unit to be fitted below the redesigned headlight. However, there was no sign of the rear-facing sensor that would enable blind spot detection.

More recently, leaked specifications for the new model confirmed that it’s grown in length thanks to a reshaped license plate hanger that moves the plate down and backward—a move that appeared to be intended to take the hanger and plate out of the rear-facing sensor’s cone of detection. Now Kawasaki’s patent reveals that the back radar may have actually been in the original spy pictures; the firm just found a way to hide it from sight. 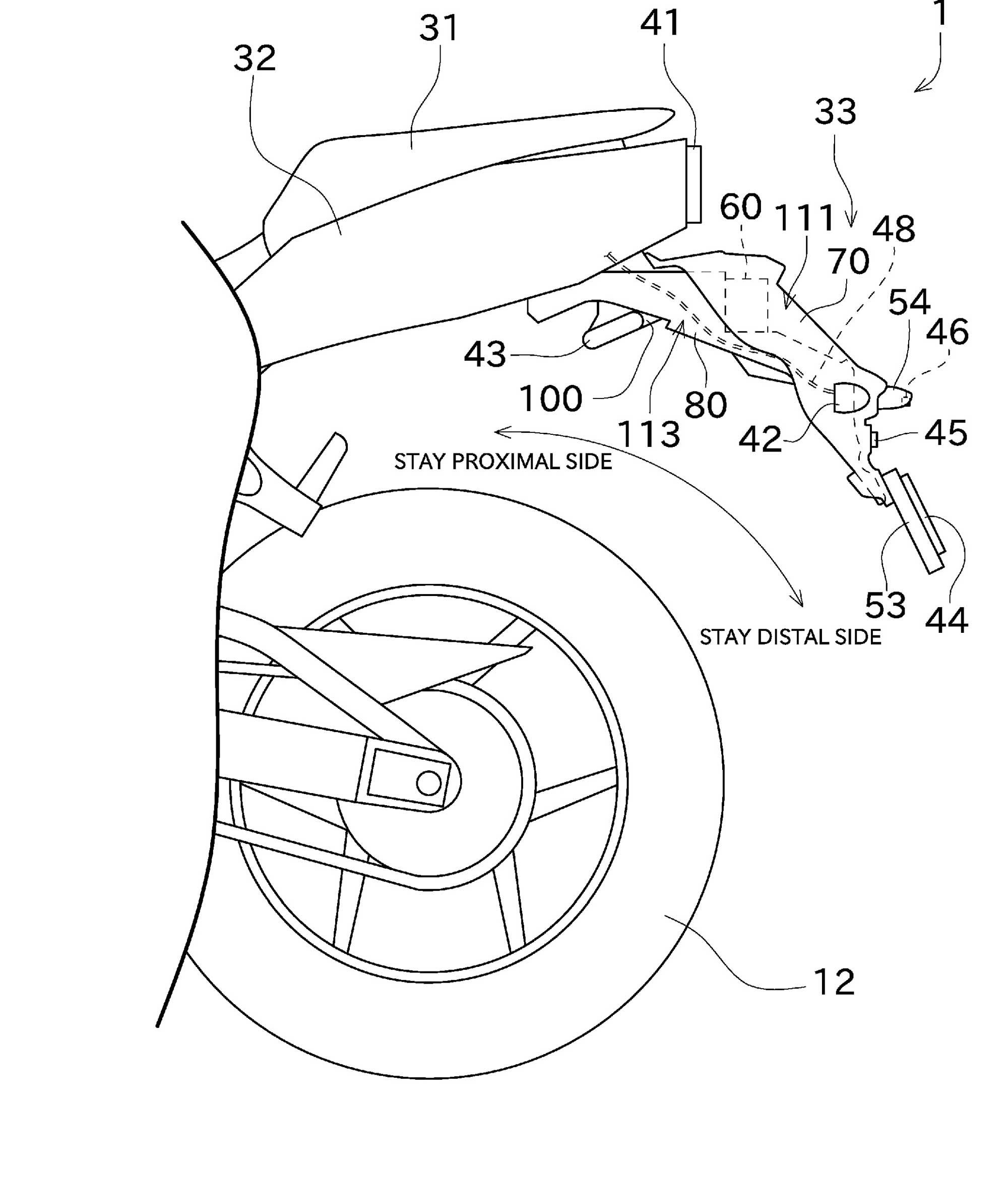 That’s actually a significant step. All the bikes we’ve seen using Bosch’s radar system so far, including the Ducati Multistrada V4 S—which is the only model to use the rear sensor as well as the front one—the BMW R1250 RT, and the latest KTM 1290 Adventure S, have left the radar units fully exposed. While cars with radar units usually hide them behind thin plastic covers built into their front bodywork, it seems that doing the same on bikes isn’t as easy. 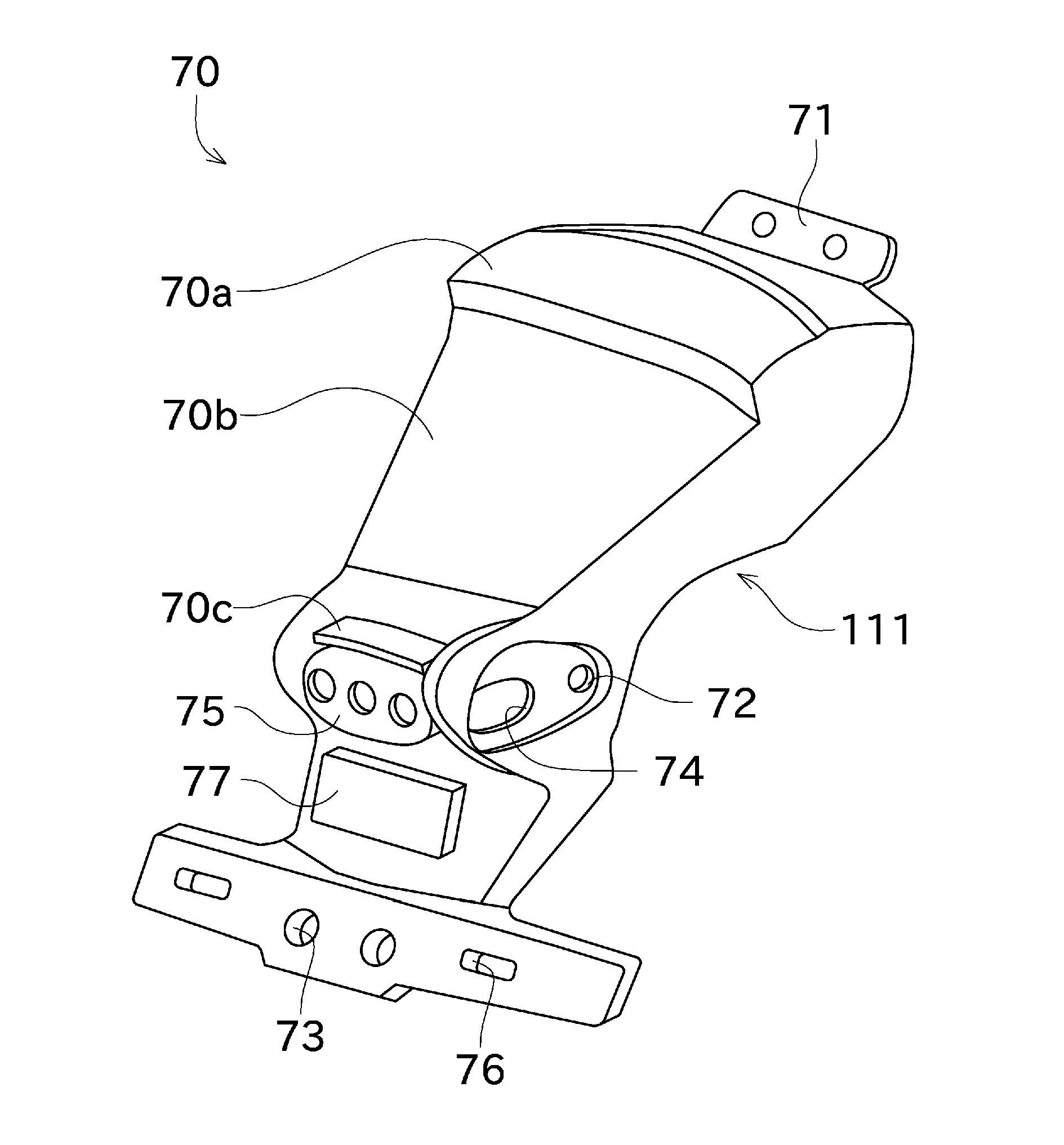 The patent drawing shows the resin and fiber core of the hanger carrying the main unit while other parts of the structure hide and protect the electronics. (Japanese Patent Office/)

Kawasaki’s new patent explains that the license plate hanger is made of three sections: a structural core that carries the weight of the plate, the rear turn signals, and the radar sensor, plus upper and lower covers. The core is made of resin that includes metal and glass fibers to give it rigidity and strength, allowing it to be a stable mount for the radar sensor. Meanwhile the upper cover—which entirely hides the structural part and the electronics it holds—is made of a much thinner resin without any glass fibers or metal. The cover has little strength, and even needs to be molded in a specific shape with a horizontal ledge across its upper section to maintain its shape, but it’s radar-invisible, allowing the electromagnetic waves to travel straight through.

The third section, again made of the thin, nonstructural material, is attached to the underside of the hanger to protect the wiring running to the lights and radar mounted on it, and all three parts are connected using a waterproof seal to keep moisture away from the high-tech components within. 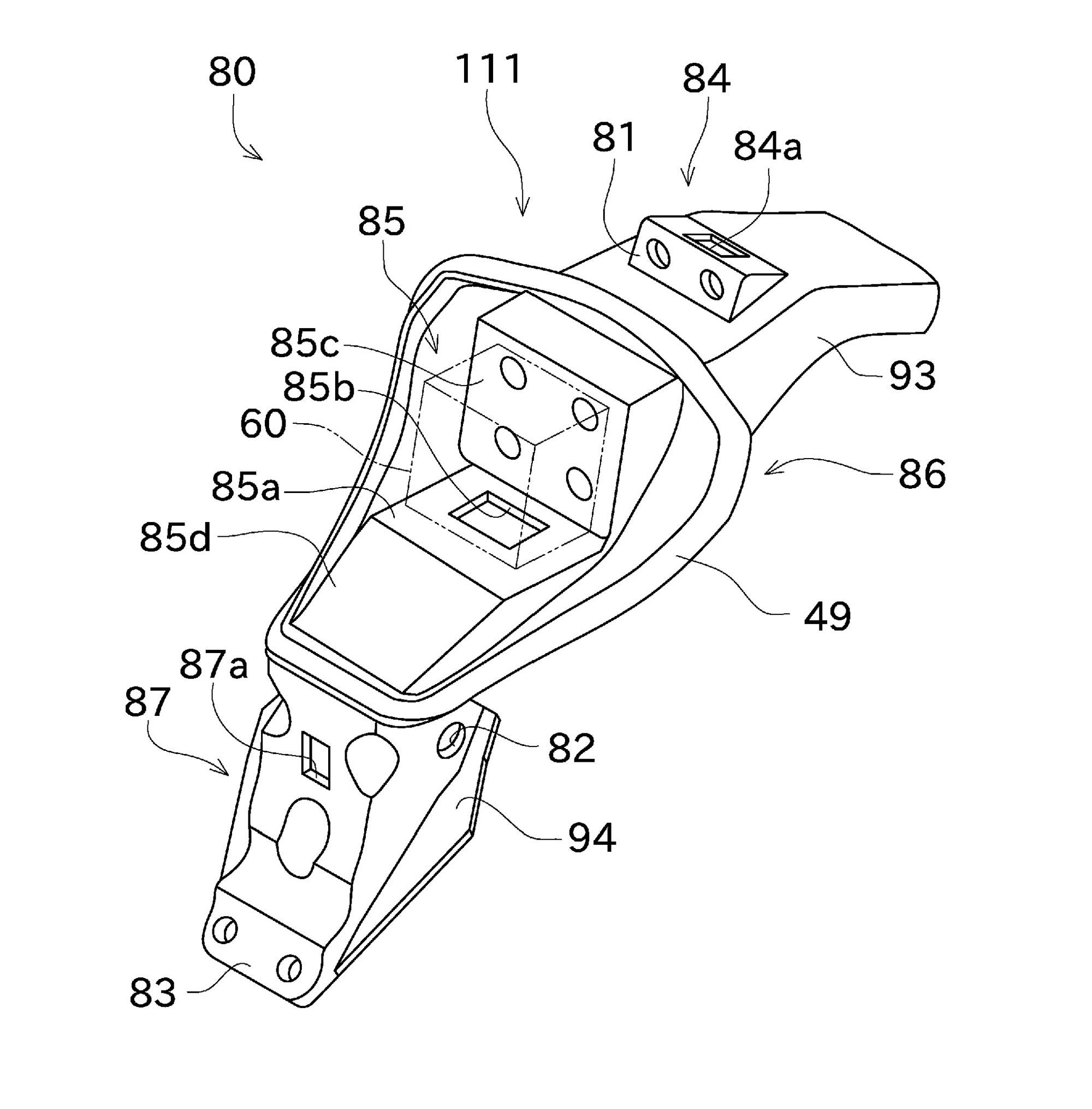 A thin upper cover on the hanger covers the sensor but allows radar waves to pass through. (Japanese Patent Office/)

Looking back at February’s spy photos, it’s clear that the license plate hanger shown in Kawasaki’s patent is the one on the 2022 H2 SX, so while there was no rear radar to be seen, it’s actually in place already. Like the Ducati Multistrada V4 S that uses the same rear sensor, the bike is likely to warn of vehicles in your blind spot using lights in the mirrors.

While the patent doesn’t mention the forward-facing radar, it’s worth noting that the original spy shots showed the area under the headlight, where the sensor will sit, was blanked off with a cover plate. This could have been interpreted to suggest the radar wasn’t fitted to the bike, but in light of Kawasaki’s use of radar-transparent resin to cover the rear-facing sensor, it makes sense that the same technology will be applied to the front, allowing the boxy radar sensor itself to remain hidden from sight even if it’s clear where it is due to the flat, smooth panel that covers it. Additional patent drawings suggest the idea could be carried over or modified to fit other models, as with this Z900RS example. (Japanese Patent Office/)

It’s also worth mentioning that by mounting the radar inside the H2 SX’s license plate hanger, Kawasaki has created a component that could be quite easily bolted to other models if required. However, the same patent document also included images of alternate versions of the same idea, including one that was recognizably the tail of the Z900RS modified to incorporate a rear-facing radar.

The Zippo AxeSaw Combines Three Tools in One