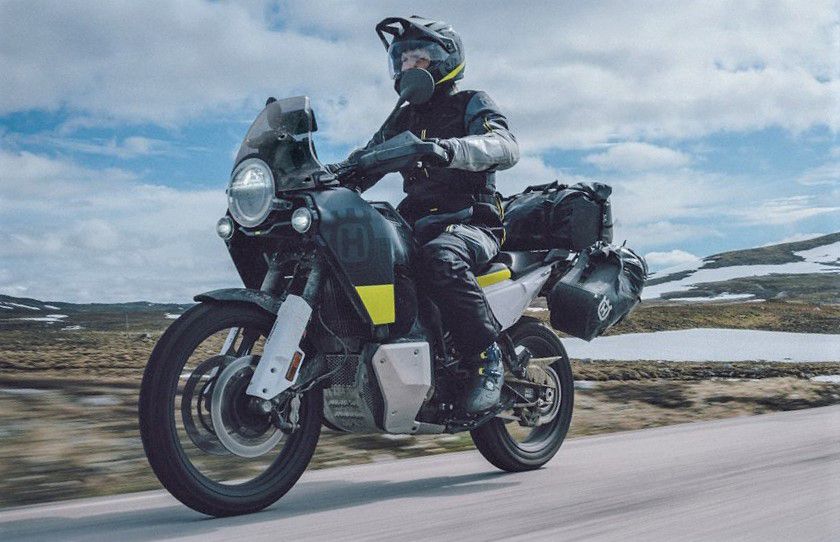 In production form, the new Norden 901 “adventure-travel” bike remains very similar to the concept we saw at EICMA back in 2019. Shared KTM elements abound. (Husqvarna/)

It feels like a long time since Husqvarna showed the Norden 901 concept bike at the 2019 EICMA show in Milan, but at last the production version is ready for launch and the showroom version is almost indistinguishable from the original show bike.

That’s welcome news, as concept bikes are often watered down to the point of blandness before reaching production, though the fact that the Norden 901′s adventure-forward design has always been heavily based on an existing KTM production model has clearly helped. Under the distinctive skin, the Norden borrows the lion’s share of its parts from the KTM 890 Adventure, though its new style should position it far enough from the Austrian machine to appeal to a different customer base. 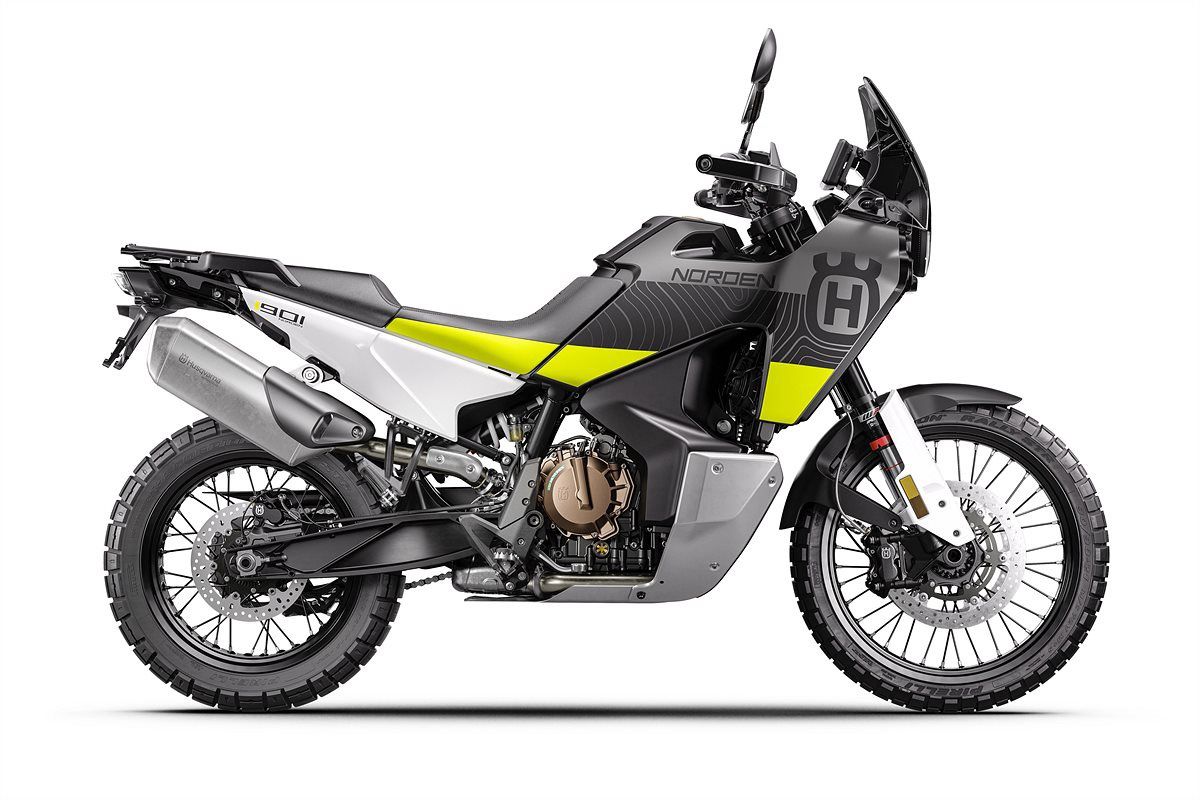 The Norden’s engine is the same KTM LC8c parallel twin that’s used in the 890 Duke and 890 Adventure models, rated as making 105 hp at 8,000 rpm and 74 pound-feet of torque at 6,500 rpm. It’s a stressed member in the same chromoly steel frame used on the KTM 890 Adventure and drives a six-speed box with an up-and-down quickshifter. Other tech includes Bosch cornering ABS with a switchable off-road mode that deactivates the system on the rear wheel, plus a cornering traction control system. Riding modes include Street, Offroad, and Rain, each altering the throttle response and traction control settings to suit. An additional Explorer mode is a software-update option available from dealers that reconfigures the TFT instrument panel and allows the rider to set the traction control system from nine possible levels.

As has increasingly become the norm, the bike’s TFT dash also acts as an interface for smartphone media and navigation, connected via Bluetooth, and cruise control is standard. The 5-gallon tank is unique to the Norden model, and styling is also a drastic change from the KTM 890, being equal parts retro and modern. (Husqvarna/)

While the frame is from the 890 Adventure, the Norden gets its own version of the unusual side-mounted fuel tank idea that’s used on the KTM. Reshaped to suit the Husqvarna’s styling, its capacity drops a fraction, to 5 gallons, which should still be enough for a 250-mile range.

That styling is very different from that of the sharper-edged KTM Adventure. Clearly taking its cues from classic Paris-Dakar bikes of the ‘80s and ‘90s, the Norden evokes the past without being slavishly retro. The fairing and screen are more conventional than those used on the KTM, and more traditionally attractive, while the seat and oversized circular headlight give a clear family connection to the Husqvarna Svartpilen and Vitpilen models. 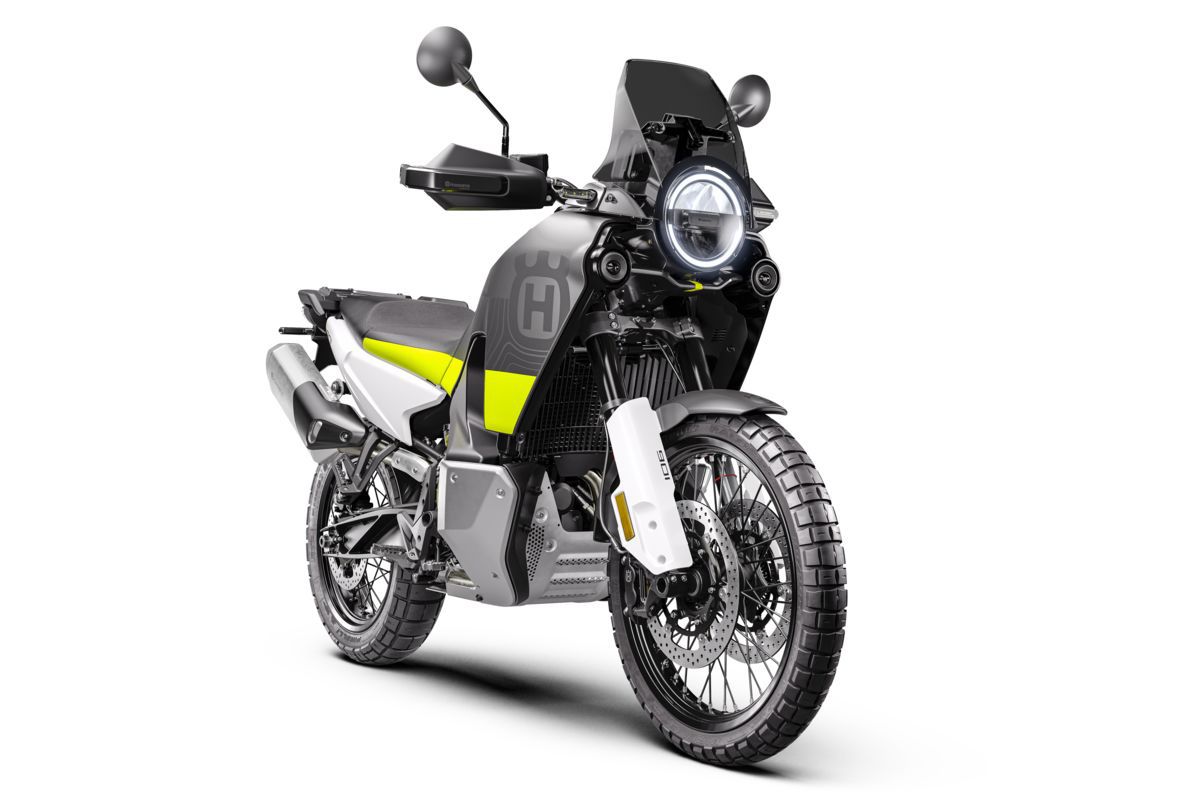 Adjustable WP Apex suspension on either end is more road-biased than the KTM Adventure R’s XPlor units, with the rebound-adjustable rear shock employing a handwheel for preload. (Husqvarna/)

Related: Husqvarna’s Norden 901 Concept Is The ADV King Of The North Like the 890 Adventure, the Norden 901 has WP Apex suspension at both ends, with a 43mm fork, adjustable for rebound and compression, and a rebound-adjustable rear shock with a handwheel to tweak the preload. The swingarm is again the same as the KTM, with the usual lattice-style bracing and a direct shock linkage.

Wheels are the same size as the KTM 890 Adventure too; a 21-inch front and 18-inch rear, with tubeless Pirelli Scorpion Rally STR tires. The same is true of the brakes, which are Husqvarna-branded but, like the KTM-badged units on the 890 Adventure, are actually made by Brembo’s Spanish subsidiary, J.Juan. The 5-inch TFT display offers Bluetooth connectivity and can also act as an interface for smartphone media and navigation with what Husky calls an “Optional Connectivity Unit,” that works with the Ride Husqvarna Motorcycles app. Power assist slipper clutch and cruise control are standard. (Husqvarna/)

Despite so many similarities to the KTM, the Norden’s closest rival may turn out to be the upcoming Ducati DesertX, due for launch in December and featuring similar, Dakar-inspired styling and the firm’s 937cc water-cooled V-twin, making around 110 hp.

Husqvarna has said the Norden 901 will be available in North American dealers this month (November 2021), with price starting at $13,999. 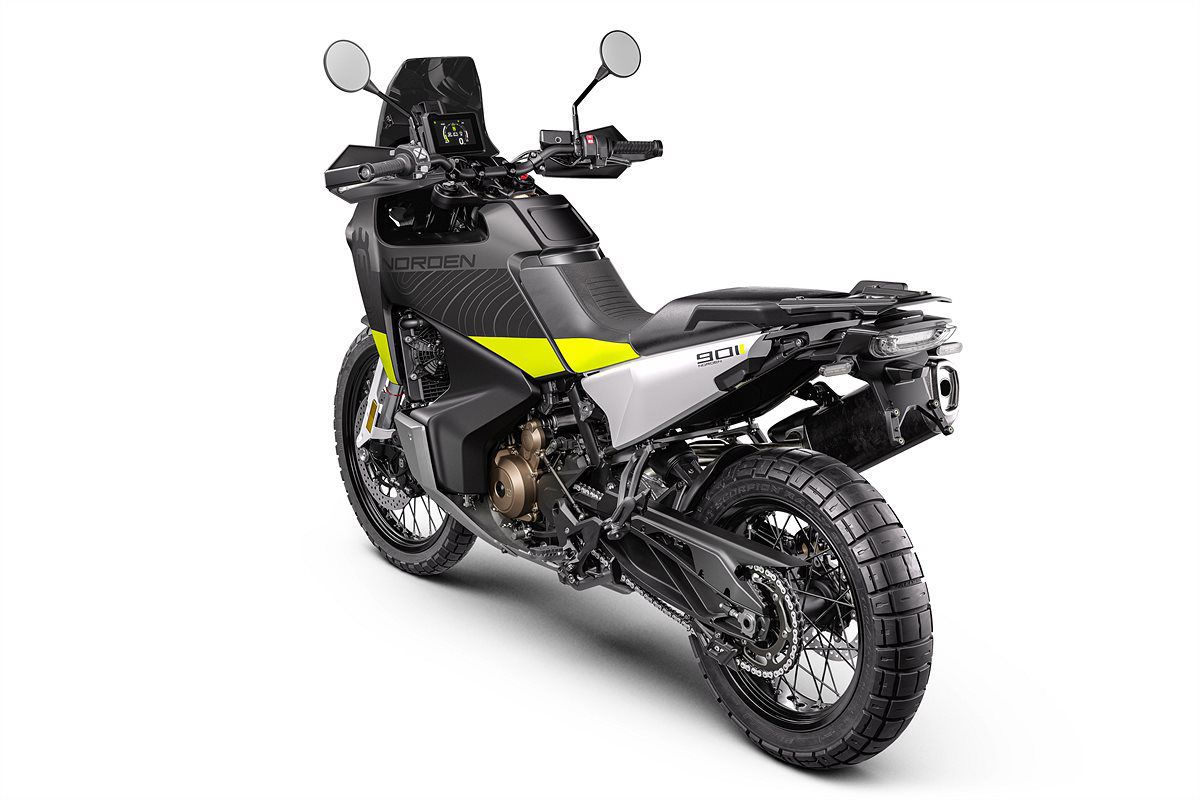