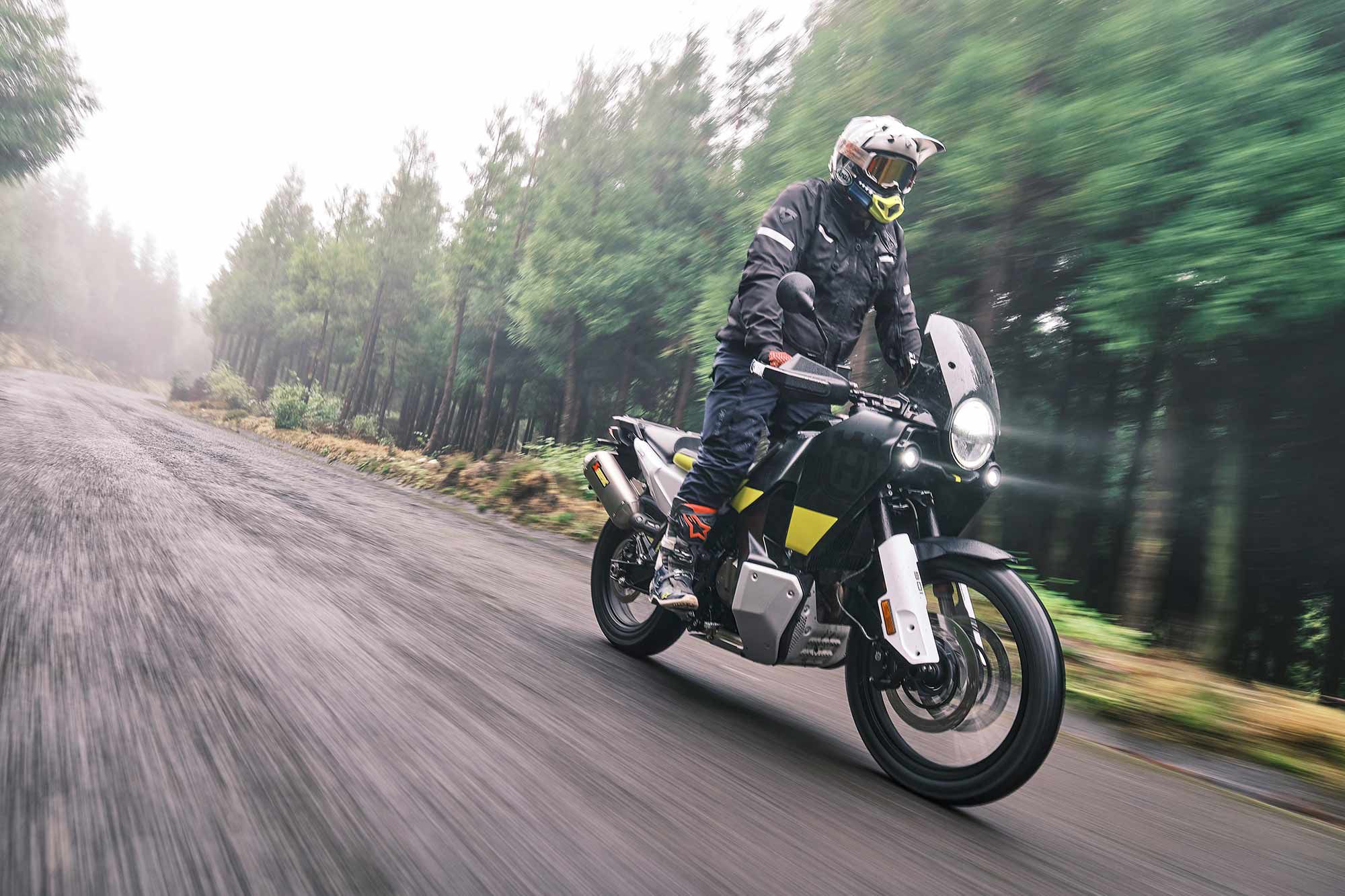 Husqvarna’s Norden 901 is a comfortable and capable adventure motorcycle. (Husqvarna/)

It’s difficult to review Husqvarna’s motorcycles without talking about the KTM models from which they are derived—for this motorcycle, evolved is a better descriptor—and even more difficult to not make comparisons. This is because Husqvarna, as the second adopted child of KTM CEO Stefan Pierer, is a play to maximize profitability; Husky has less overhead and fewer operating costs because it has been absorbed by the machine that is KTM. And until now, most of Husqvarna’s street offerings have been heavily styled riffs on tried-and-true orange platforms, riffs that have missed the mark in one way or the other. Don’t get it wrong; they’re still excellent machines, but not better than what you could have if you chose orange over white. After two days in the Azores on the 2022 Norden 901, we can say that has changed.

Let’s usher the orange elephant out of the room in quick order. The Norden 901 is built on the same chassis and engine platform as KTM’s 890 Adventure and 890 Adventure R. Engine capacity, tuning, and performance are identical, as are the frame and subframe. Yet it’s the differences that make the Norden 901 the most compelling ADV to roll out of Mattighofen. 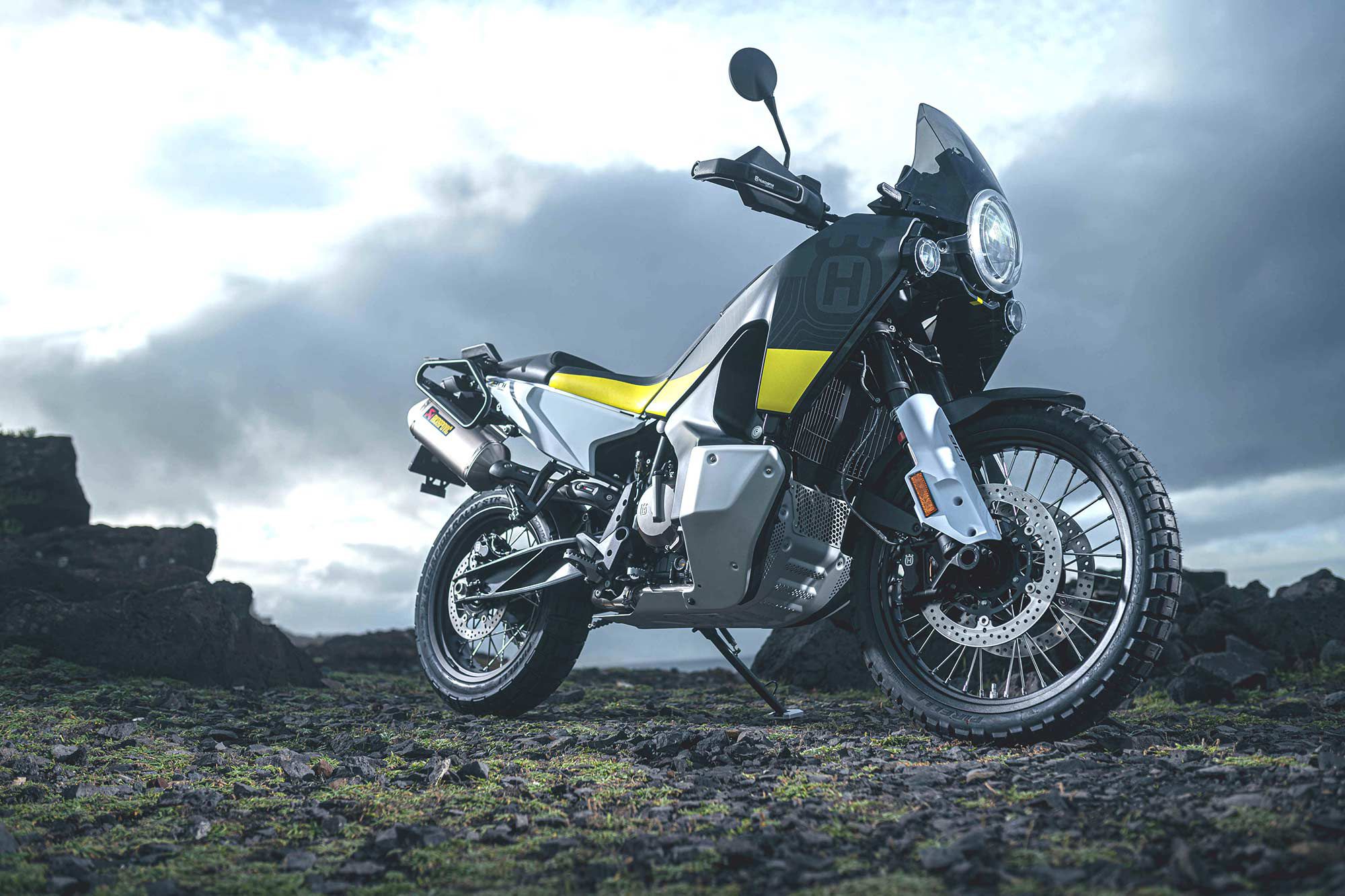 The production Norden 901 looks nearly identical to the concept that was released November 2019. (Husqvarna/)

When the Concept 901 was released at EICMA 2019, the buzz was immediate and palpable. The insectoid fascia and knife-edge angles of the KTMs were replaced with smooth modern lines that still evoked rally in a neo-retro sort of way. Two years later, the production model hasn’t been diluted by regulations or cost-cutting measures and looks nearly identical to the concept. The design is entirely Husqvarna; a round LED headlight sits high above the front wheel, flanked by integrated fog lights and a steeply angled windscreen. The black, white, and yellow bodywork has broader shoulders and hindquarters. The overall look is refined and subtle in many aspects, yet substantial at the same time.

Also substantial is the Norden 901′s LC8c engine. Displacing 899cc, the liquid-cooled parallel twin puts out a claimed 105 hp at 8,000 rpm and 73 pound-feet of torque at 6,500 rpm. On the CW dyno, the same engine in the 890 Adventure R produced 86.5 hp at 8,350 rpm and 58.1 pound-feet at 6,850 rpm, measured at the rear wheel. It’s an excellent powerplant for adventure riding, rowdy and powerful when called for but usable and controllable when the need arises. Torque comes on strong at around 3,000 rpm and jumps the Norden forward with authority when asked; the rush of power sweeps you through to the 9,000-rpm redline. Throttle response is immediate but not jerky, and it’s easy to feel how much you are feeding the rear through the ride-by-wire throttle.

Controlling the power to the rear tire on the Norden 901 is as easy as thumbing a button to choose your slip level and then cracking your right wrist. (Husqvarna/) 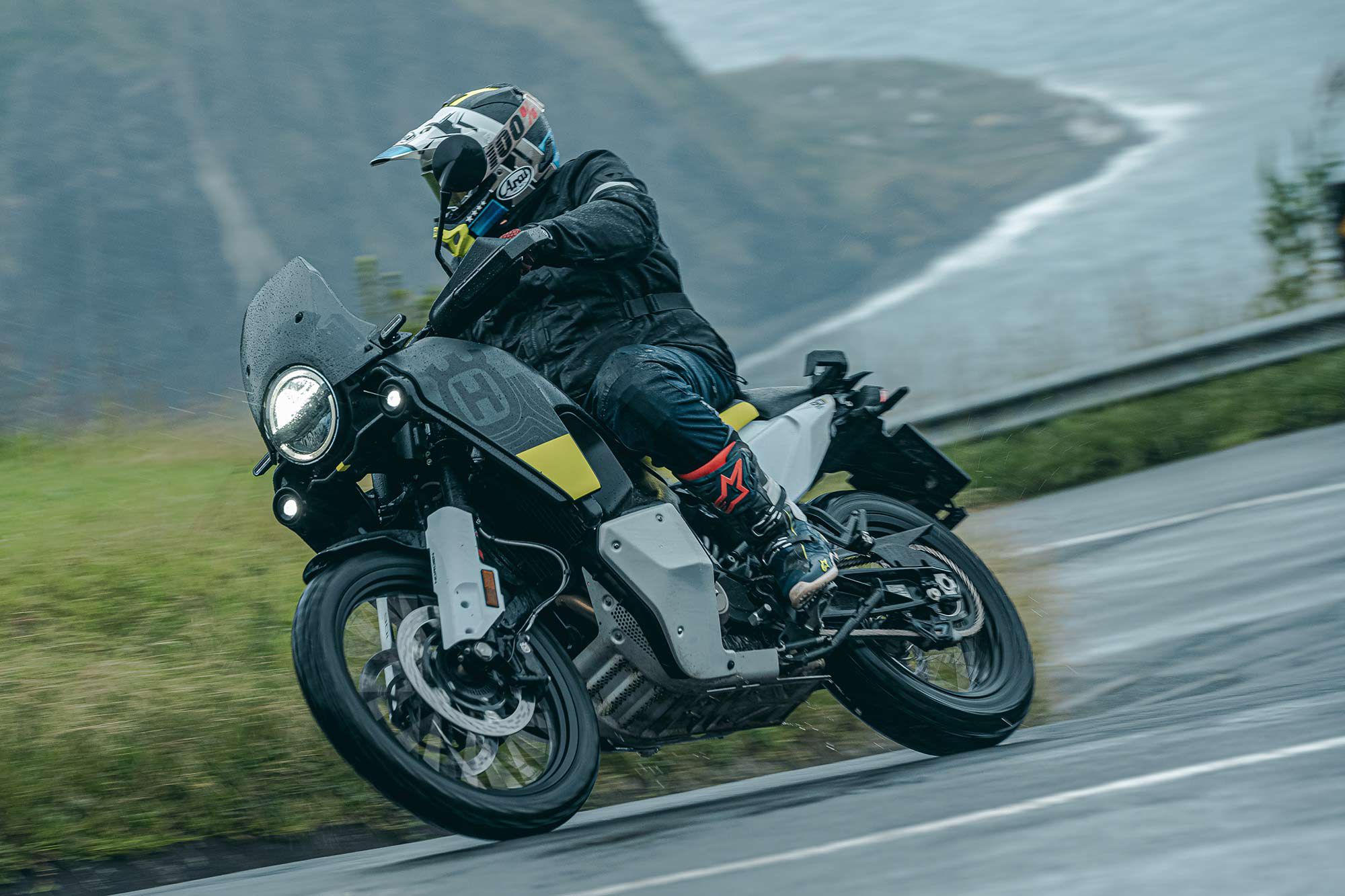 Each standard mode does its job well, but the optional Explorer mode gets the most out of the Norden’s rider aids. This mode allows riders to select between nine levels of rear tire spin or slip via the up/down button on the thumb pad on the left side of the handlebar. Throttle response can also be selected based on the Street, Rain, and Offroad settings. The ABS settings also get locked to this mode, a great help for those who habitually forget to change ABS modes after turning the ignition key. After the first few hours on the bike I used the Explorer mode exclusively, as it’s flexible and adjustable on the fly.

And with the highly changeable weather on the island of São Miguel in the Azores archipelago, the ability to change rear-wheel slip levels quickly and easily is extremely useful. Our ride consisted of winding mountain roads, often wet, with green moss growing in the center and on the edges of the lane, slick as icy cobblestones; and dirt roads soaked with the remnants of Tropical Storm Wanda. Traction varied along a range from tacky dirt to grippy asphalt. It was much easier to add or subtract TC with a single tap while riding rather than navigating menus for mode selection.

The graphic interface on the Norden’s 5-inch TFT screen is bright and easy to understand and navigate. Images of the bike are highlighted with red and green areas to make it clear what changes are being made. Key info, such as the speedometer, tachometer, fuel level, TC level, and ABS settings, are clearly visible. There’s also Bluetooth connectivity for turn-by-turn directions via Husqvarna’s own app, although it is an additional charge. Finally, a Husky dash that isn’t a failed styling exercise.

And it’s not just design that differentiates the Norden 901 from its KTM cousins. The bike’s suspension travel and damping really set it apart. Travel from the 43mm WP Apex fork is 8.7 inches (220mm), and rear shock is 8.5 inches (215mm); that’s smack in the middle of the street-focused 890 Adventure and 890 Adventure R, which have 7.9 inches (200mm) and 9.5 inches (240mm) respectively. Matched with softer springs and damping than the 890 R, the suspension setup on the 901 is perfectly suited for rough and broken asphalt or moderate imperfections on dirt surfaces. Choppy off-road sections are gobbled up by the Norden’s fork and shock without upsetting the chassis or rider. 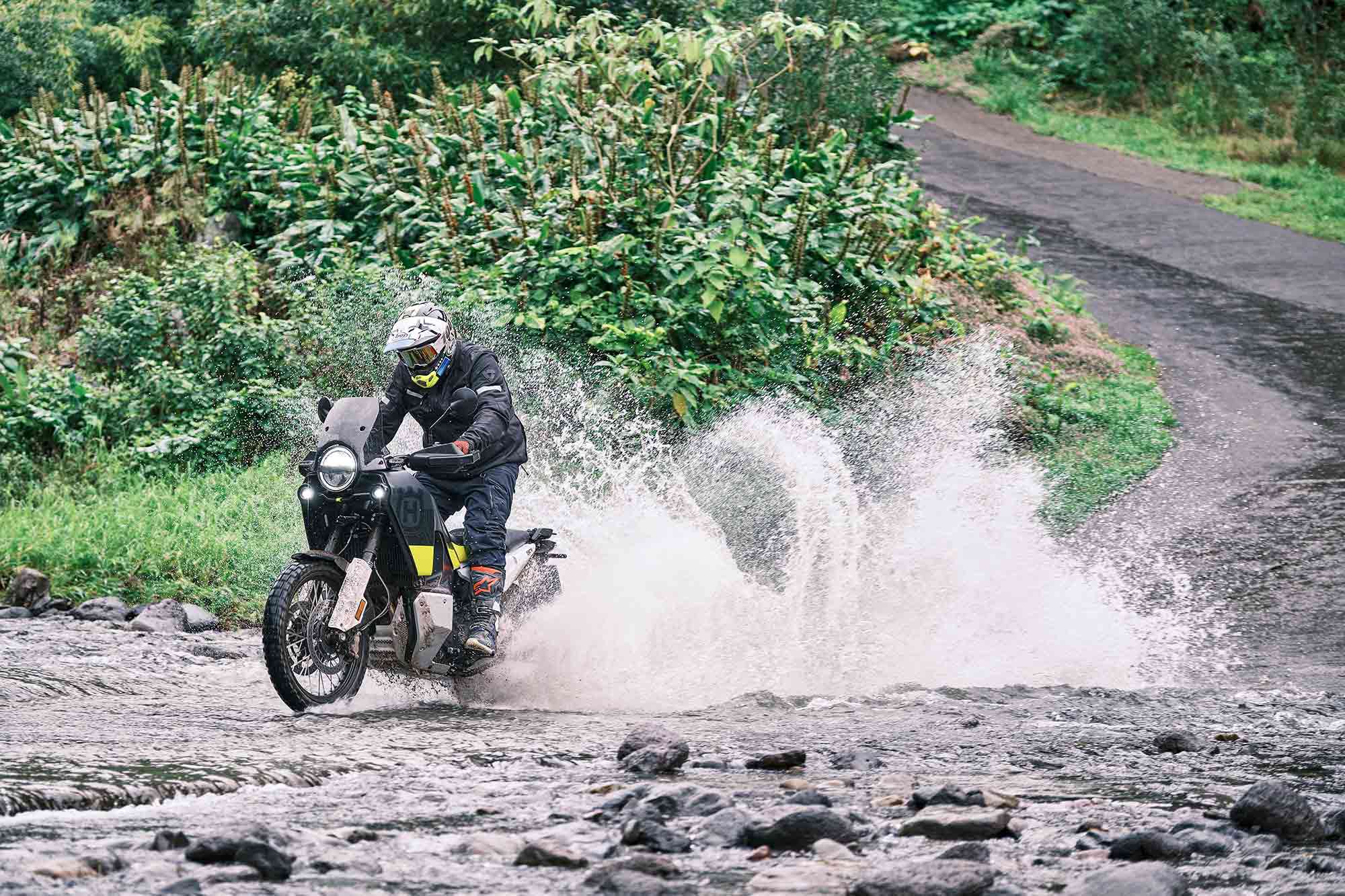 You can get rodeo on the Norden 901, but you will find the limits of the shock quickly when pushing hard. (Husqvarna/)

Bigger hits will require moderation. In the course of testing we got a little too spirited and found the end of the shock stroke quickly and often. More compression damping would be advised, but the rear shock lacks that adjustment; a shame. More preload via the handy knob under the left side of the seat and more rebound damping helped keep things under control when the shock did bottom, but the omission of compression adjustment at the rear is significant. Still, when ridden within Husqvarna’s intended usage parameters as a travel mount capable of going most places in the dirt, the Norden is wonderfully comfortable and sure-footed. 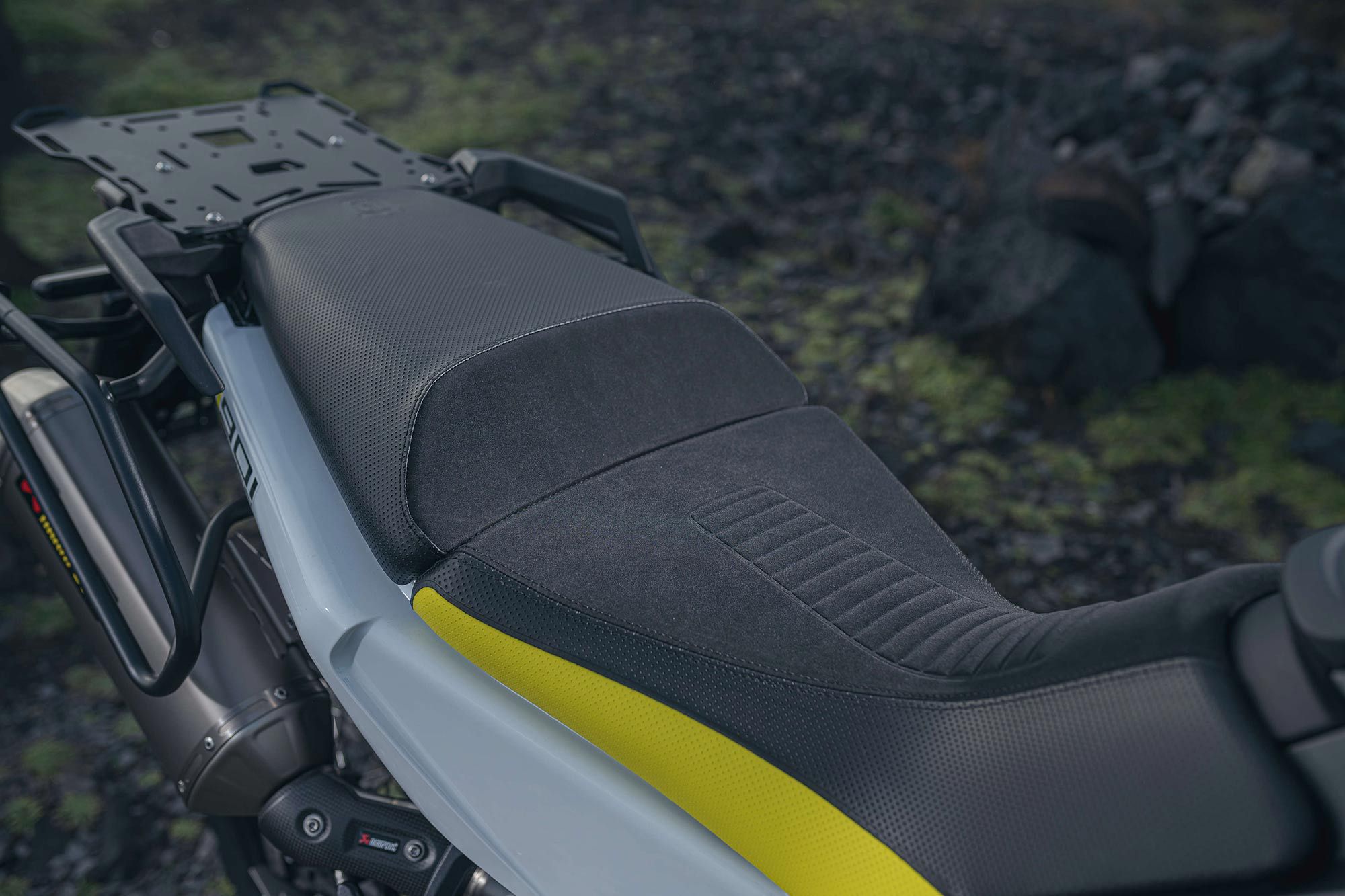 A wide and flat rear profile of the Norden’s seat makes for all-day comfort. (Husqvarna/)

So styling is cool, the engine is excellent, the rider aids are well sorted, and the chassis is capable. But what’s really impressive is how comfortable the Norden is, especially the seat, which is wide and flat at the rear and narrows to the front. This gives excellent support while occupying the aftmost part of the saddle. When aggressive riding calls for the rider to move their weight forward, the seat has room to move or to get feet down. Seat height is adjustable, with a low setting of 33.6 inches and a high setting of 34.4 inches; at 5-foot-10 I personally preferred the high setting, which allowed for additional legroom to the motocross-sized footpegs. Wind protection from the windscreen is great, with just a minor amount of buffeting against my motocross helmet. Additionally, the wider tank and shoulders of the Norden keep the elements off of legs in light rain. Wide handlebars provide plenty of leverage for moving the 901 around with authority on and off-road, and reach is adjustable forward and back in three positions covering 1.2 inches. Comfort for the launch haul sets the 2022 Husqvarna Norden 901 apart from its KTM counterparts. (Husqvarna/)

Husqvarna claims the Norden 901 weighs 449 pounds without fuel. Add 30 pounds or so for 5 gallons of gas, and the 901 comes in around 479 pounds, about 15 more than the 890. Most of that weight is found in the large LED headlight, fog lights, and a 901-specific tank shape that moves its capacity higher on the chassis, as the bottom of the tank is narrower. The tank also carries a quarter-gallon less than the 890′s. Transitioning from side to side in the dirt, you can feel that weight as the bike’s reactions are a bit sluggish. On the street, there is no hint of sluggishness; the Norden has quick reflexes while being rock solid in the corners. 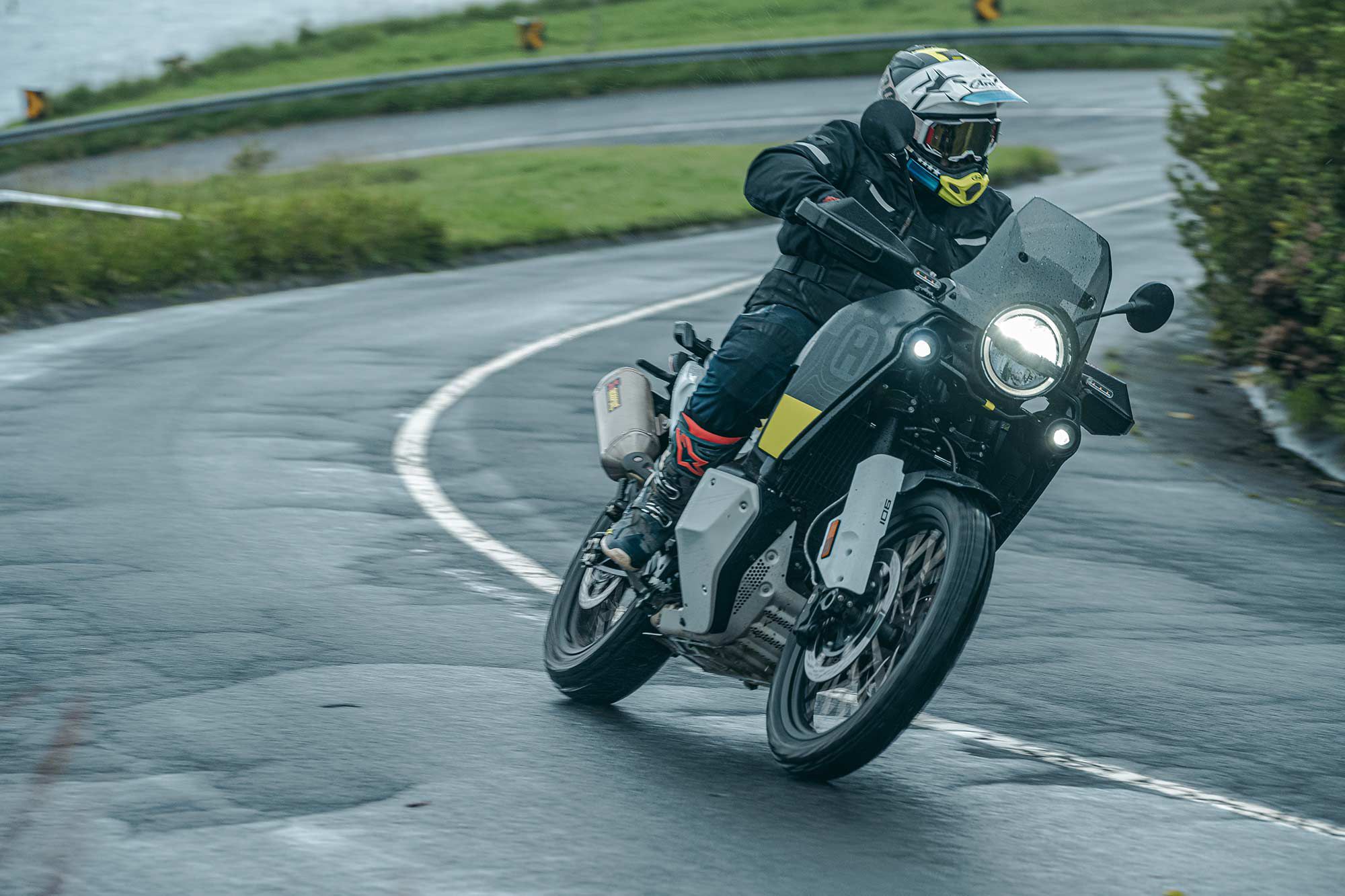 On the street the Norden 901 is quick to react and is stable once in a corner. (Husqvarna/)

After two full days on the Norden in rain and sunshine, on muddy roads and dry asphalt, riding it both fast and slow, it’s clear the Norden 901 has allowed Husqvarna to step out of KTM’s orange shadow. This is a cohesive motorcycle offering a less racy take on adventure-touring while delivering on comfort and style. Husky got this one right. 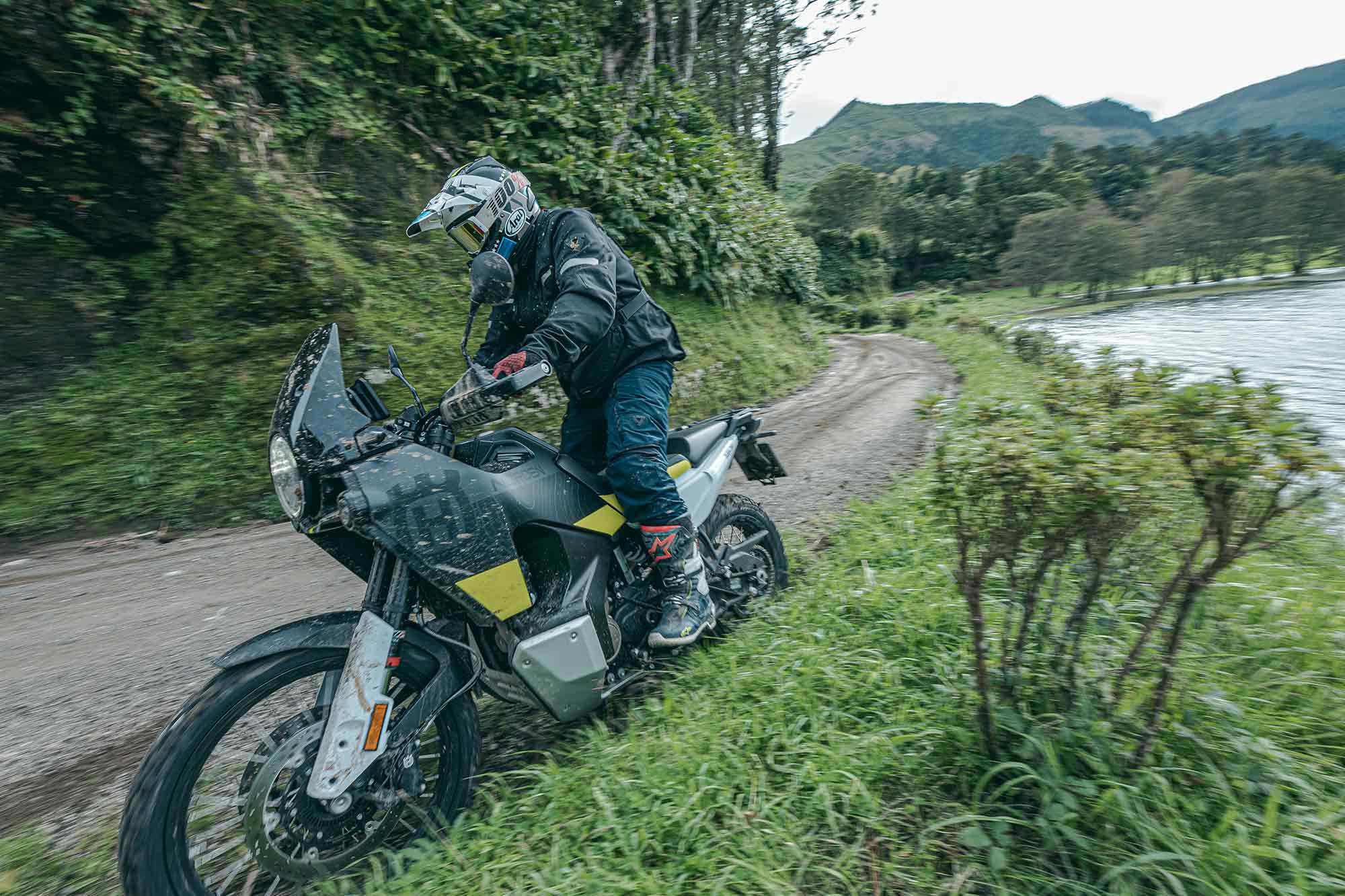 For most off-road travel the Norden 901 is suspended well, soaking up chop and rough roads with ease. (Husqvarna/)

Flashback to the 1980s With Kawasaki