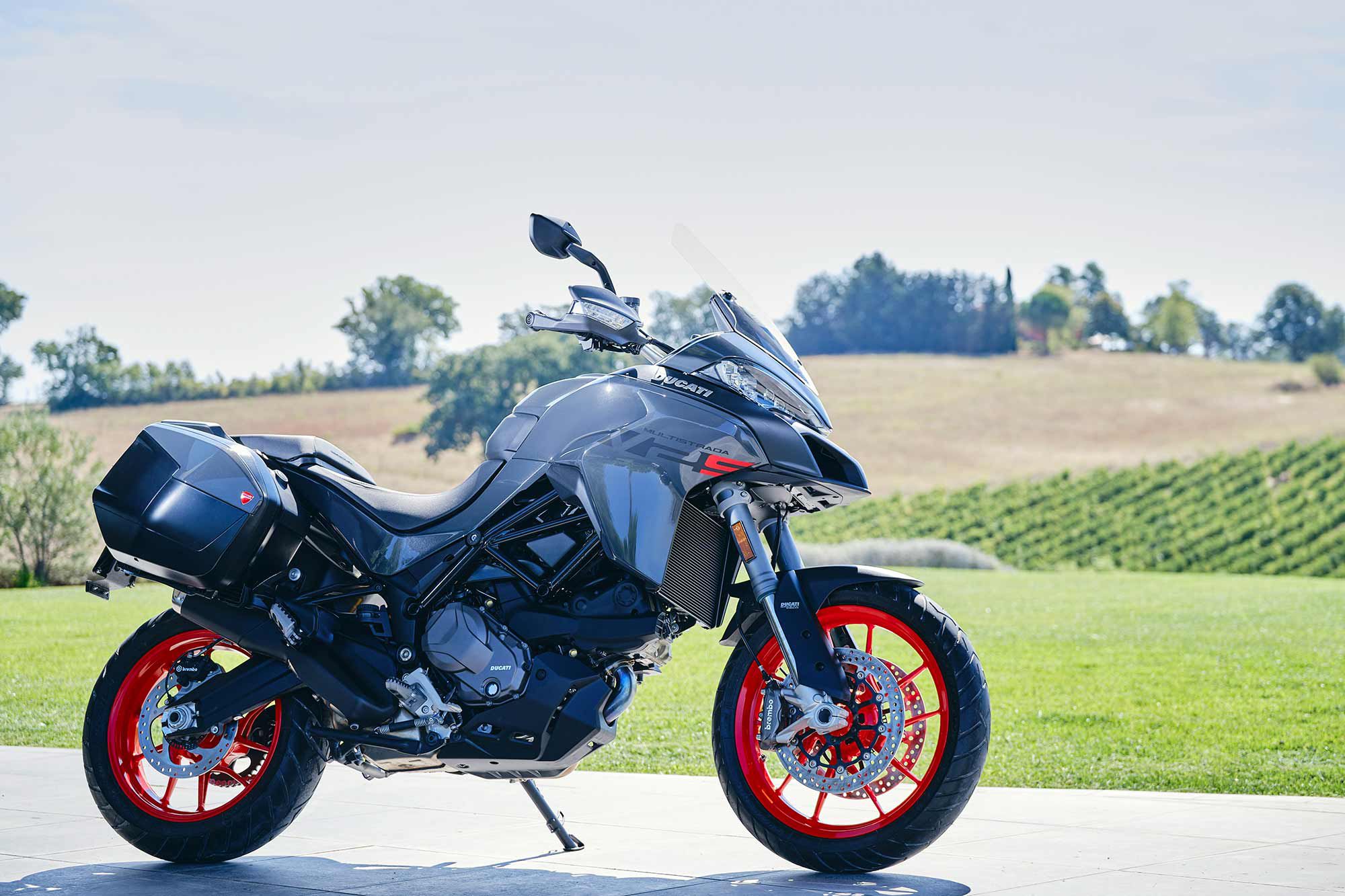 Ducati has announced it won’t be attending this year’s EICMA show (held in Milan, November 23–28, 2021). It is not alone in this decision: as of press time, several other makes have yet to confirm their attendance, including BMW, Kawasaki, Harley-Davidson, and Indian. Instead, Ducati is unveiling its 2022 models online in a sequence of six “events” between now and December 9, when we shall see what’s behind the announced “Dream Wilder—DesertX.”

In this first event, Ducati unveiled the 2022 Multistrada V2, the updated edition of the previous Multistrada 950. The biggest update/upgrade is an evolved electronics suite, primarily a six-axis inertial platform to manage new rider-aid systems focused on providing additional safety and comfort.

The newest Multistrada V2 also features state-of-the-art ABS, including a cornering function and eight levels of rider-selectable traction control. The system also provides vehicle hold for starting on hills. Four riding modes are available: Sport, Touring, Urban, and Enduro. For visibility and safety, in the event of an extreme/emergency stop the system activates a flashing function on all lighting equipment to jar narcoleptic drivers out of their slumber. 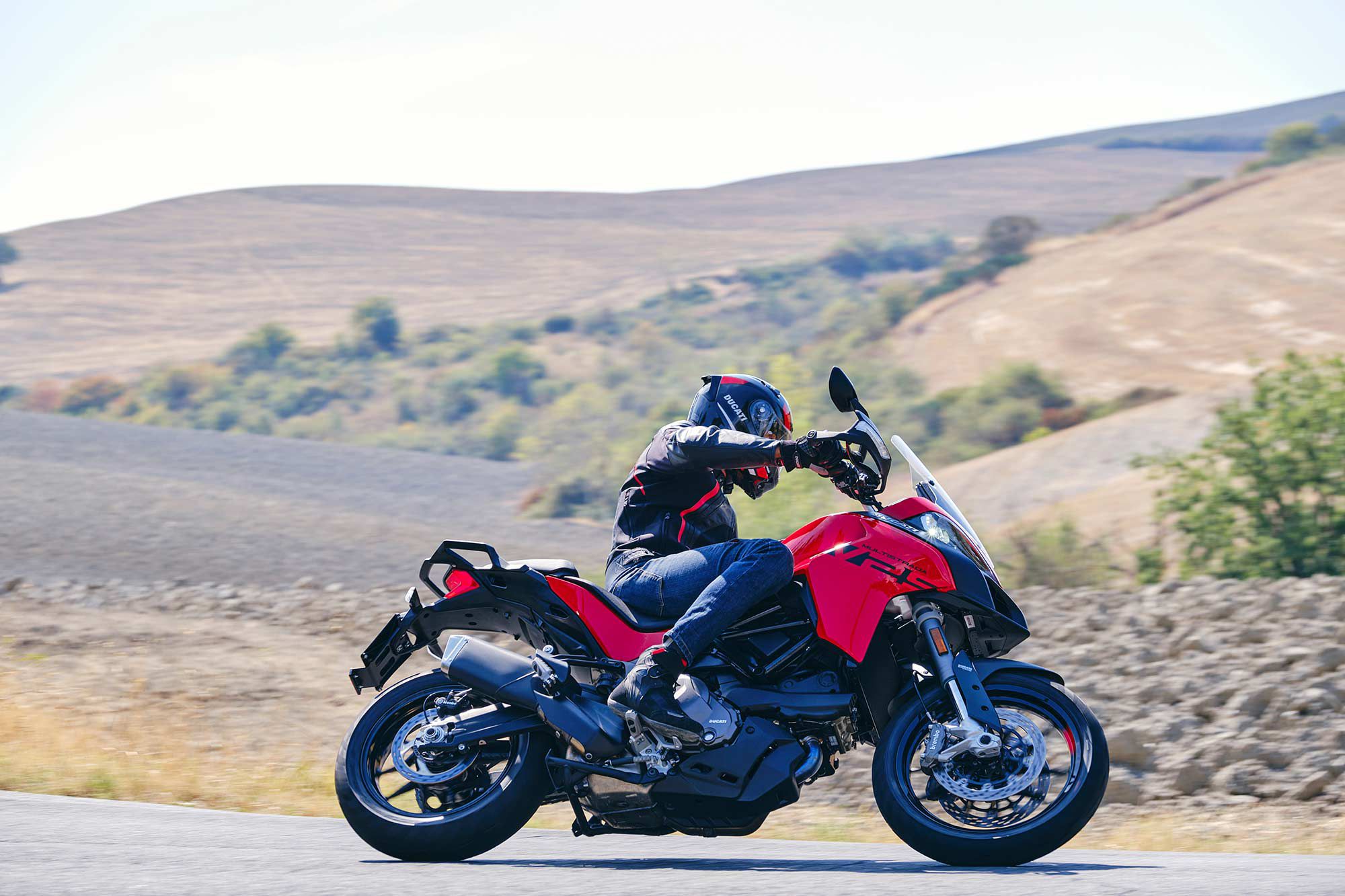 The biggest upgrades to the Multistrada V2 this year come from improved electronics and rider aids. Lighter wheels, a new clutch, and a new seat also keep it fresh. (Ducati/)

The Multistrada V2 is available in both standard and S editions. The latter includes an electronics package adding more functions and components, such as a standard cruise control and electronically managed semi-active Skyhook suspension. An LED headlight replaces the standard unit and also offers corner-lighting ability. A 5-inch TFT displays the bike’s instrumentation and acts as an easily accessible connectivity platform.

About that Skyhook semi-active electronic suspension: This means the S model uses a 48mm Sachs fork, replacing the standard Kayaba unit. That and lighter cast aluminum wheels are the only chassis differences between models. The Multistrada still features a generous 62.75-inch wheelbase, a 25-degree steering rake, and 4.2 inches of trail, the same as the Multistrada 950. The new V2 rolls on Pirelli Scorpion radials, 120/70-19 front and 170/60-17 rear. The braking system is based on the customary Brembo twin 320mm rotors and four-piston Monoblock calipers. 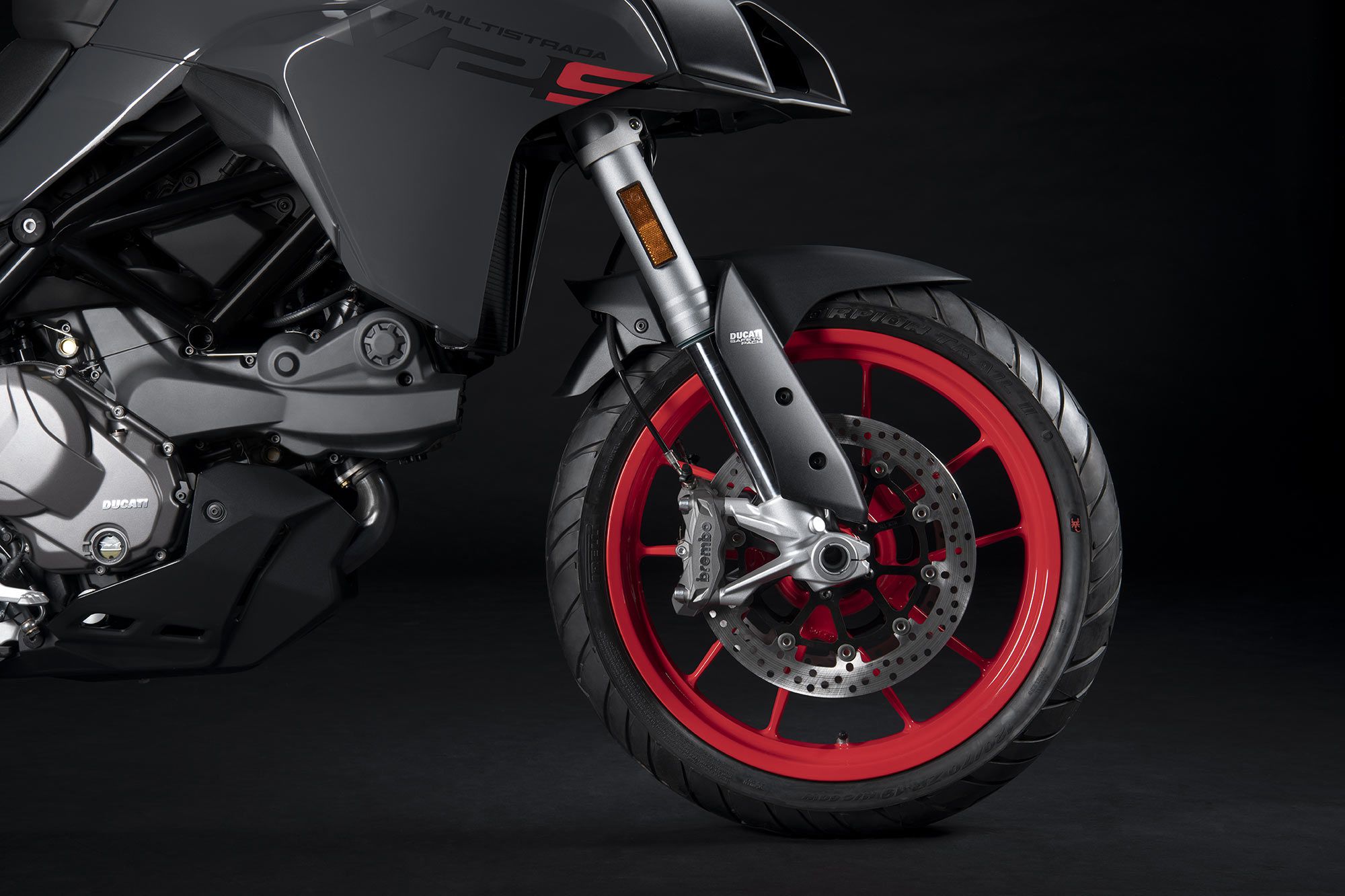 The V2′s engine also is unchanged from the previous Multistrada 950. That’s not a bad thing, as it has an excellent reputation. Displacing 937cc, the Testastretta engine is an eight-valve desmo twin with a 94mm bore and 67.5mm stroke. It breathes through a pair of 53mm throttle bodies and features a healthy 12.6:1 compression ratio. Claimed horsepower is 113 at 9,000 rpm, with 69 pound-feet of peak torque at 6,750 rpm. The engine is lighter thanks to new connecting rods, a new eight-disc clutch, and related side cover. (Editor’s Note: If you’ve ever wondered, “Testaretta” translates approximately to “narrow head,” an allusion to the bike’s compact included valve angle. The “11″ in the model designation is the engine’s valve overlap expressed in degrees of crankshaft rotation.) 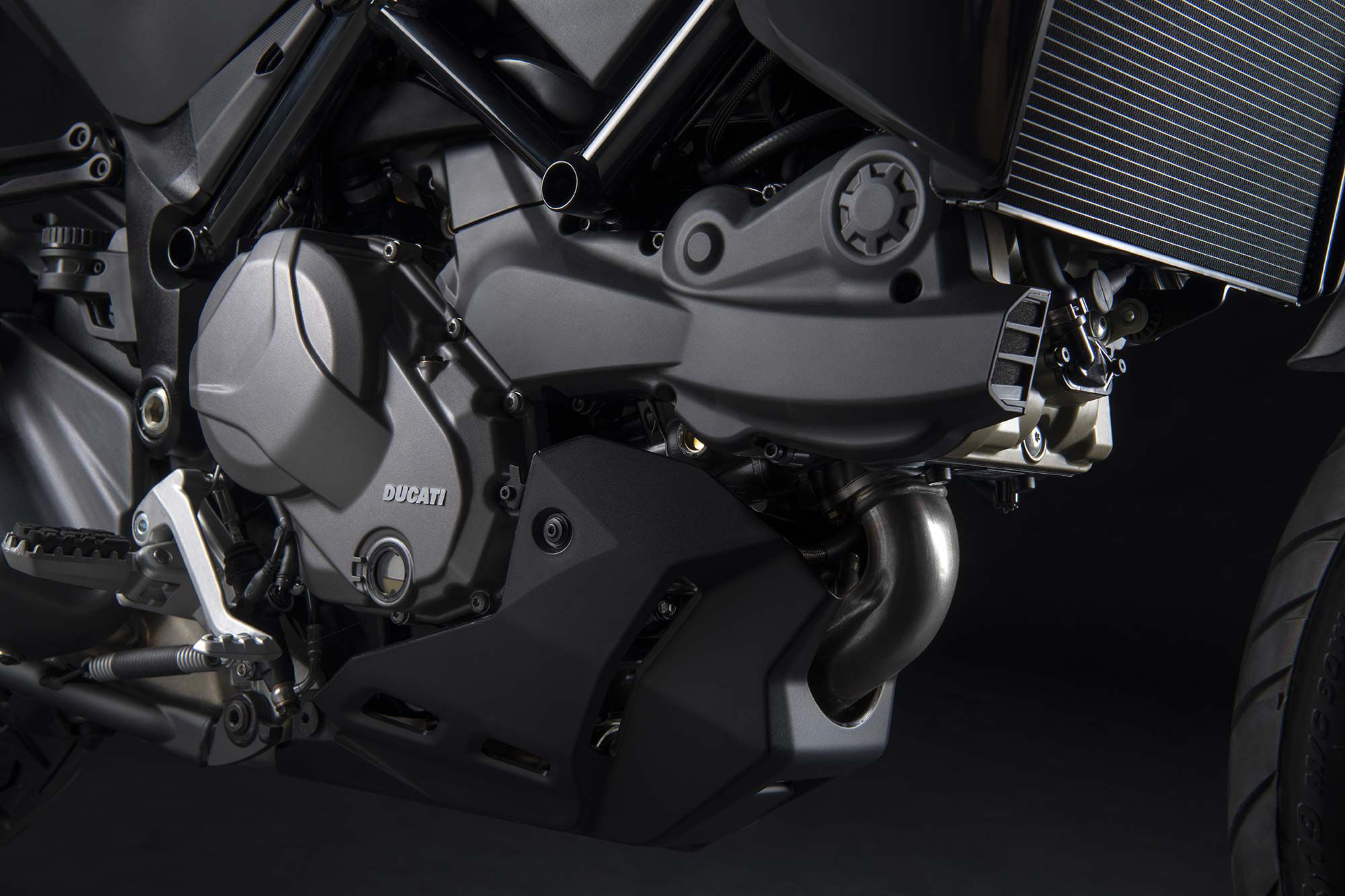 There are loads of motorcycles in this class, but the standout point of the Multistrada V2 is the 937cc Testastretta engine. (Ducati/)

The Ducati specialists have also fine-tuned the riding position with an eye to improved long-haul comfort and low-speed maneuvering. The seat has a new, more comfortable configuration; seat height is 32.7 inches with a lower option available that drops the seat down to 31.1 inches in combination with a reduced-height suspension. The seat is accurately configured where it meets the tank, making it easier to reach the ground. The top fairing has been partly redesigned to offer better wind protection thanks to the new windscreen, which is easily adjustable on the go. Lastly, the new Multistrada V2 is about 10 pounds lighter than the previous Multistrada 950 and claims a dry weight of 439 pounds.