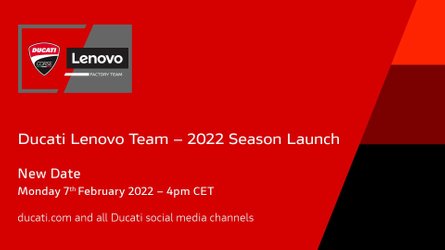 The Ducati Lenovo MotoGP team originally planned to hold its official 2022 season launch event on January 28, to directly precede the Sepang testing weekend. Unfortunately, while the 2022 MotoGP season isn’t yet underway, the pandemic is already doing its best to throw team planning efforts off track. Jack Miller has been home training in Australia over the break and has unfortunately tested positive for COVID.

Miller is thankfully asymptomatic, but he’s also unlikely to be able to leave Australia in time to arrive in Europe for the planned Ducati Corse activities. He is currently isolating at home and is scheduled to have a second PCR test next week to assess the situation. As a result, Ducati Corse will now postpone its official 2022 MotoGP team launch until February 7, 2022. If you had the old date marked in your calendar, now is the time to revise it.

“Unfortunately, I’ve been tested positive for Covid-19, which means I am unable to travel to Europe. I am still home in Australia and doing fine. Since I don’t have any symptoms, at least I can continue with my training. I miss you all and will see you in Sepang for the test,” Miller said in a statement.

When MotoGP teams host their annual launch events in the months preceding the upcoming season, we usually get a look at the team’s riders, new bikes, and new liveries for the year all at once. Because the Sepang test will still take place as scheduled, Ducati Corse’s 2022 livery will also be unveiled ahead of the official team launch for 2022, due to the necessity of rescheduling.

With the new plan in place, Ducati Corse says it will unveil the 2022 Ducati Lenovo Team livery on January 31, ahead of the official MotoGP Shakedown Test. That test is currently scheduled to last from January 31 through February 2 at the Sepang International Circuit in Malaysia. At that event, Michele Pirro and the Ducati Test Team will be putting the new bike through its paces on track.