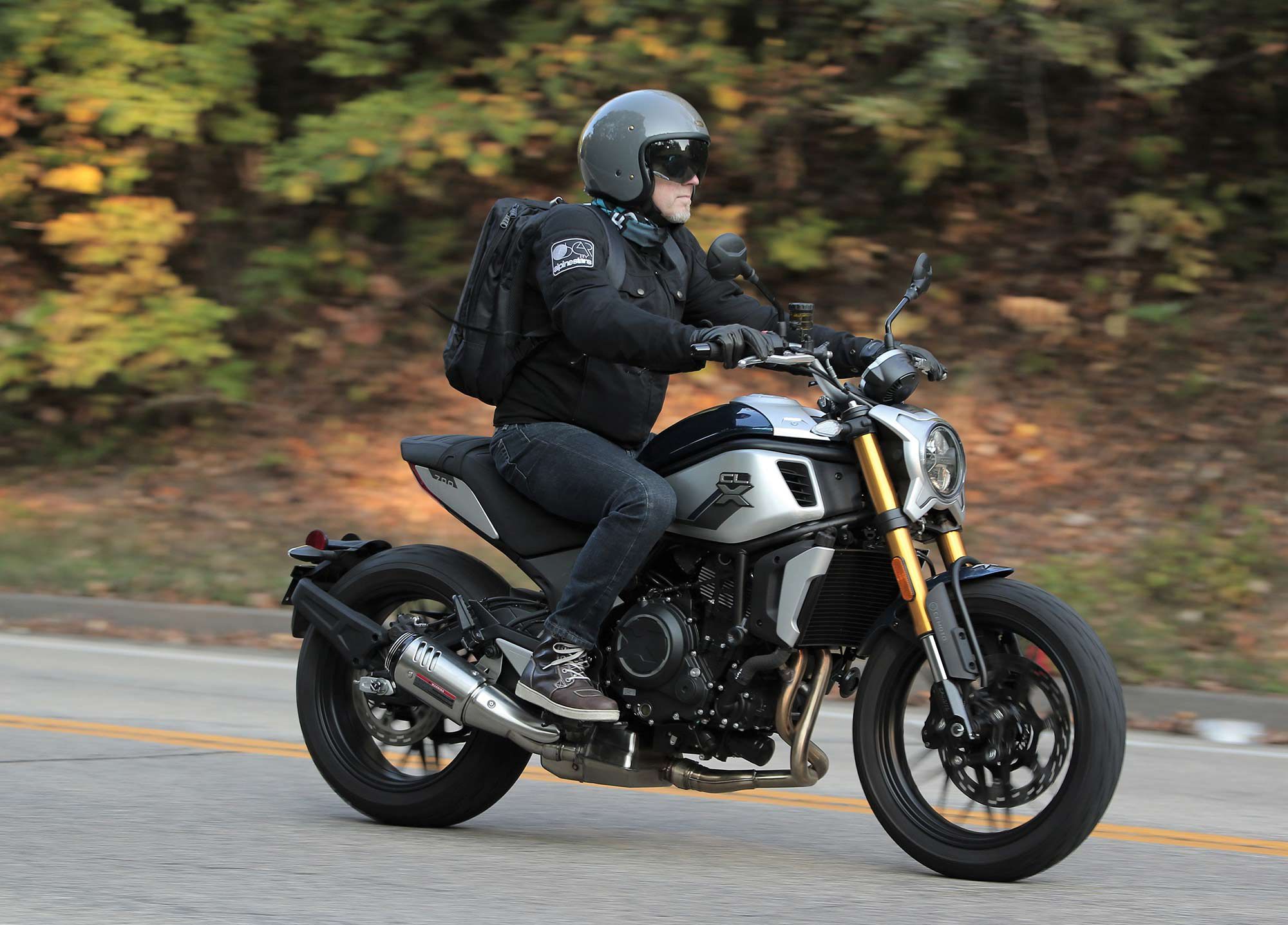 Last month’s announcement about CFMoto entering the American motorcycle market next year with several street models wasn’t the only bit of news we scooped at the firm’s US dealer show. The reps also let us throw a leg over one of those bikes, the 2022 CFMoto 700CL-X, for a quick spin on the surrounding Minnesota backroads. Although the unit we rode wasn’t a homologated US market-ready bike, the short, hour-plus ride left us with a fairly good idea of what to expect for the official 2022 launch, which the reps say will come sometime mid-2022. 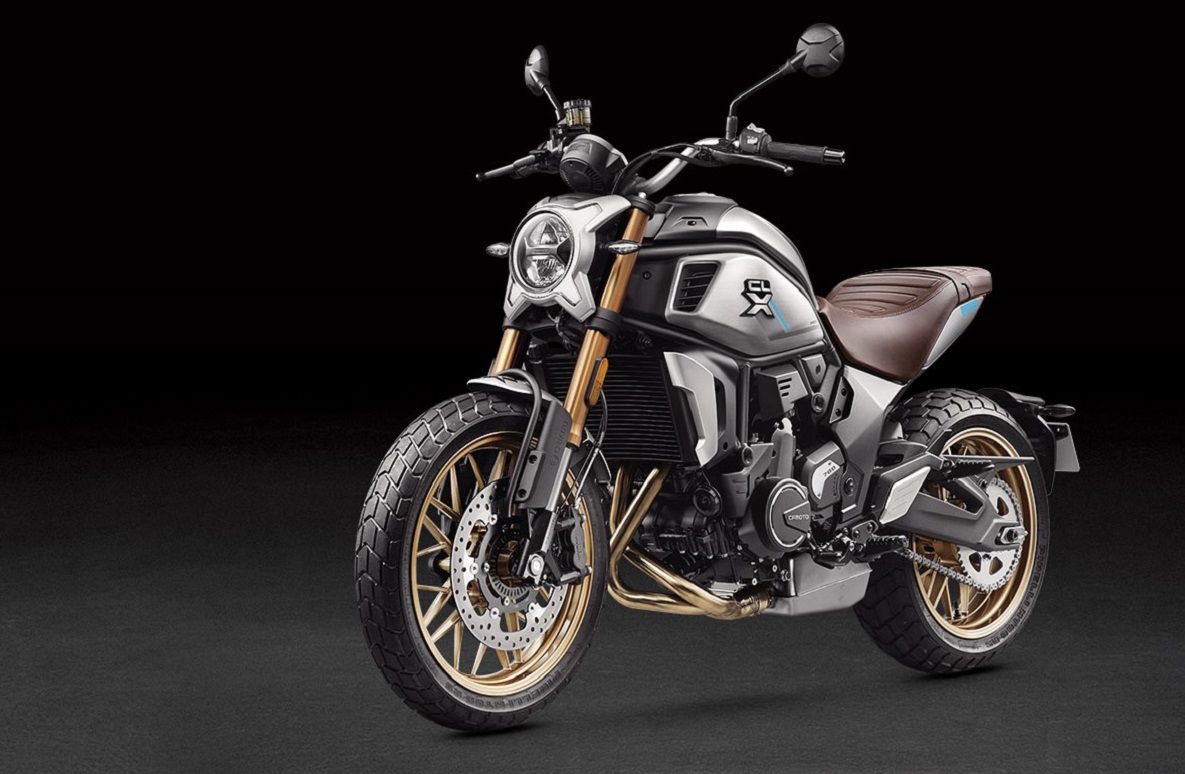 The middleweight has already been launched in some European markets, with three variants available. The US will see only the base 700CL-X and the Sport (so far). (CFMoto/)

The 700CL-X isn’t a secret at this point—it’s already been launched in Asia, Europe, and Australia—but I can already hear cries of “Chinese junk” echoing off the comments board. So let’s cut to that right up front; however you feel about Chinese labor practices is a separate issue, but as far as specifications, build quality, and riding attributes go, the CL-X is the real deal.

Looks-wise—and even spec-wise—you can slot this stylish naked middleweight into a sort of neo-retro middle ground between the Yamaha XSR700 and the Ducati Scrambler, right down to the aluminum side panels (which CFM says are modular and customizable), front wheel sizes, and even tire choice. Based around CFMoto’s constantly refined 650cc engine from the 650NK, the 700CL-X still uses the same bottom end but swaps in forged pistons and split connecting rods in addition to stroking it for a larger displacement. Although it’s not quite all-new, or even cutting-edge, the 693cc liquid-cooled dual-overhead-cam parallel twin has enough punch to generate a claimed peak power of 74 hp at 8,500 rpm, allied to 50 pound-feet of torque. Those numbers alone are enough to put it up against Yamaha’s CP 2-powered bikes and Ducati’s Scramblers, with even a slight edge over the Kawasaki Z650. Of course, we’ll have to wait for a fully cleared US-spec production model to be sure. 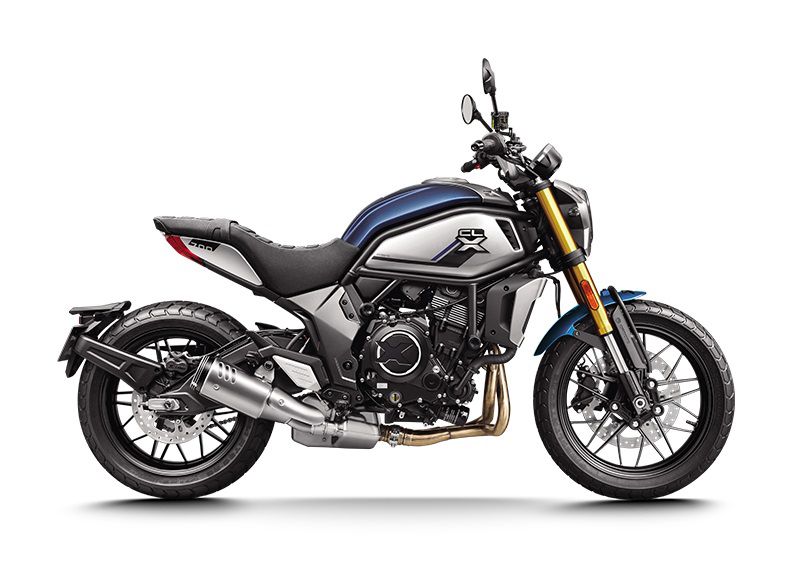 Steel tube frame uses parts as a styling element; the 693cc parallel-twin sits between the tubes rather than atop a backbone. (CFMoto/)

A closer look at the chassis brings up a few interesting quirks, like a fuel tank that sits inside the frame (and is bracketed by those CL-X badged panels) whose trellis-style tubes even serve as styling elements. But the overall look is cohesive, with an aggressive profile from the tank all the way down to the deeply dished saddle. Out back is a nicely sculpted aluminum swingarm, while the distinctive headlight design up front repeats the “X” theme seen throughout the bike, like on the clutch cover and all the way back to the extremely tidy tailsection. The component list is also impressive, with features like a fully adjustable 41mm KYB inverted fork, a six-speed transmission with a slipper clutch, one-touch cruise control, and Bosch EFI and two-channel ABS, all standard.

Build quality and finishes are above what you’d expect in the segment—Chinese or not—with lots of clean details, tidy frame welds, and carefully routed cables.

The pillion section of the seat is where the CL-X loses the plot though; I doubt you’ll have much luck convincing a passenger or even a medium tail bag to stay put on that little patch of real estate, as there’s almost nothing to grab, or even tie-down points to lash to. A 31.5-inch seat and wide bar will accommodate most pilots easily; taller riders might feel the footpegs are too tall. (CFMoto/)

Sliding a leg over the 31.5-inch seat is no issue if you’re a 5-foot-7 shorty like me; the 700CL-X brings roomy ergos and a riding position that’s upright and neutral, with the wide, tallish, and slightly pulled back bar making for an easy reach. Even our 6-foot-tall riding companion felt comfortable with the arrangement.

You never know what you’re going to get with that first throttle twist on an unknown bike from an unfamiliar brand, but right out of the gate, the CL-X felt like a legitimate contender. Smooth fueling, a ride-by-wire throttle, and a light clutch pull go a long way toward settling any unease, especially when they get you off the line quickly and without fuss. The parallel twin feels lively, and a good hit in the bottom part of the rev range delivers ready acceleration when you ask. The midrange is plenty beefy, and though we found ourselves mostly short-shifting in lower gears, the engine is actually happy to be revved out, where power and torque hit their peaks at 8,500 and 6,500 rpm, respectively, though you will feel some vibes begin to come through at that point too. 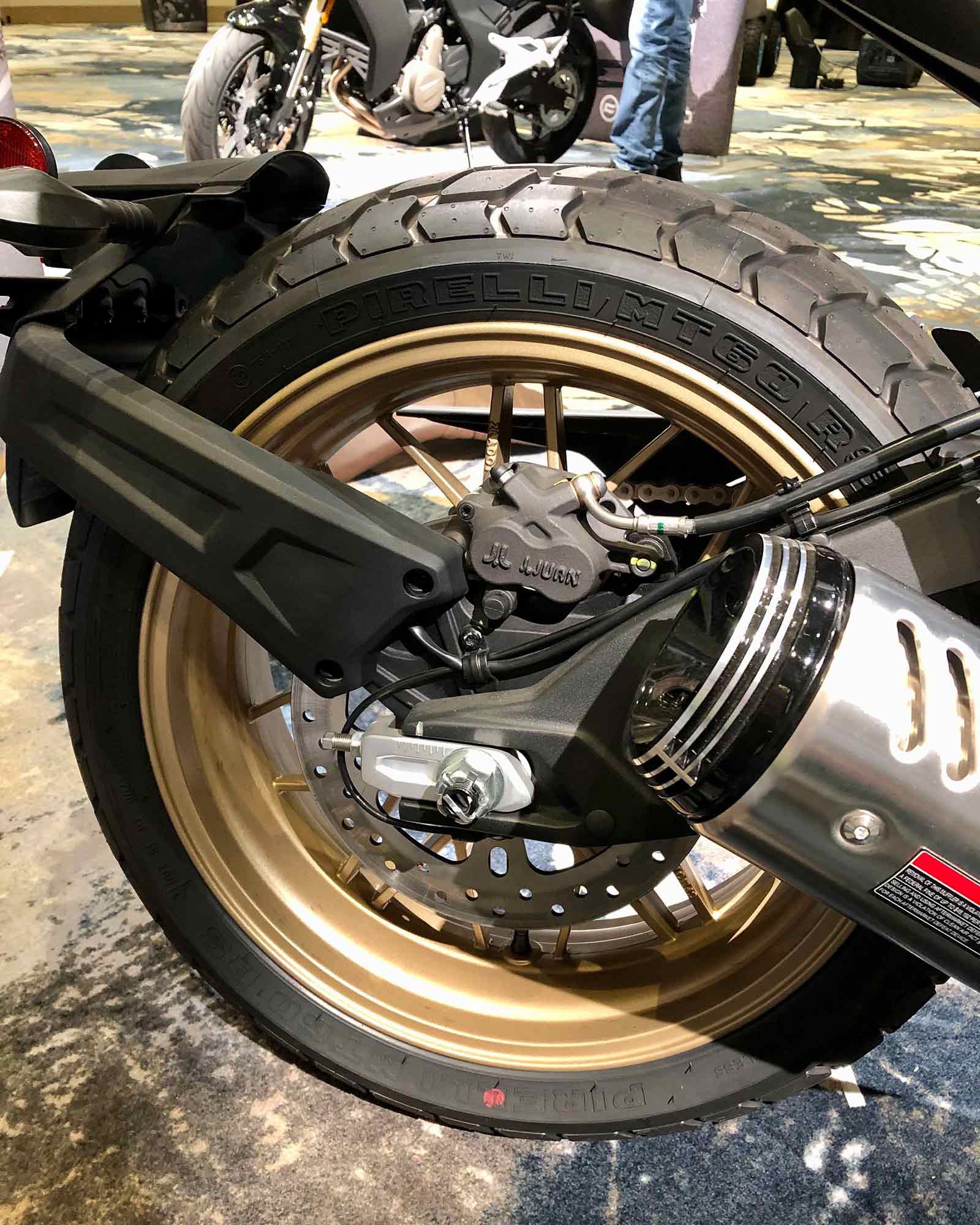 The stubby brushed aluminum exhaust is one of the best-looking stock parts around and even sounds good (though there are some huge cats lurking upstream). (Andrew Cherney/)

The EFI never disappointed except for a wee flat spot felt somewhere north of 4,000 rpm and a couple of times in Eco mode. Right, the riding modes: There are two, called Eco and Sport, which are switchable on the fly, but we felt Eco softened the throttle response too much, so we just kept it in Sport (which never came on abruptly and delivered a more accessible spread of power). Around town we also found first gear to be short, but luckily the clutch lever is easily engaged, and with a slipper clutch, gear changes are a simple affair—at least until the gearbox heats up and neutral becomes stickier to find. 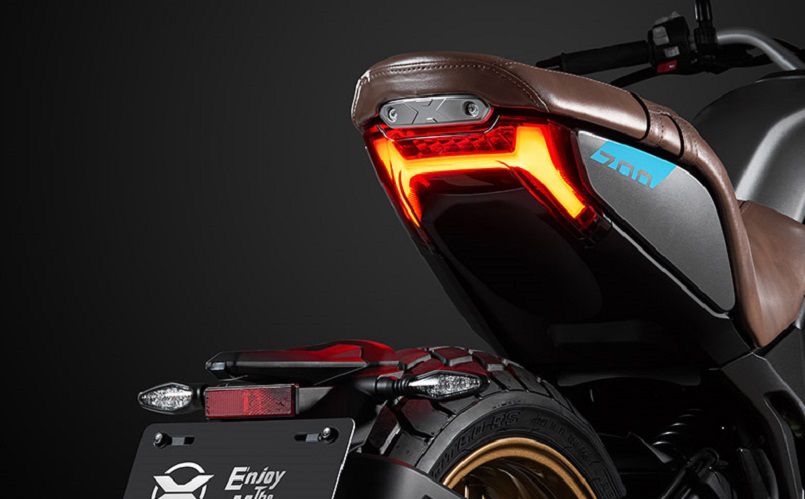 Tailsection has LED lighting and is super tidy, but also super spare; there’s nothing for passengers to grab onto. (CFMoto/)

With clear, flat roads and not much in the way of turns, we never had to push the chassis too much, with the wide bar giving plenty of leverage to hustle the bike into turns easily, even with that blocky Pirelli MT 60 RS front tire. The composure is a nice surprise, with the 41mm fork feeling stable and planted in small and medium bumps, with good feel through the bars and very little dive on heavy braking. What’s more, heavier riders can tweak the settings to suit them—there’s preload and compression adjustment in the left fork leg and preload and rebound damping on the right—a feature you won’t find on the immediate competition. The preload-adjustable rear shock proved a bit harsh in the lumpier stuff, but in overall terms was more than adequate for our short ride.

What about braking? Well, two discs are always better than one, but in this application, the CL-X’s J.Juan single 320mm front disc is up to the task, with a four-pot caliper and two-channel ABS. A light lever allows an easy two-finger squeeze, with plenty of power—and more importantly, progressive feel—to get the job done on a bike of this size and weight. 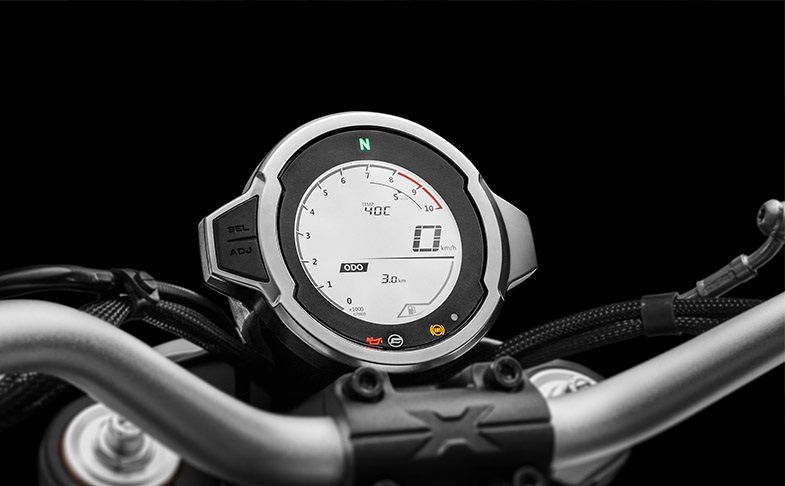 Single LCD gauge rides atop the handlebar to display most of the basic info. It’s easy to read, but the selection/menu buttons aren’t intuitive. (CFMoto/)

If the CL-X feels a bit light on some of the techier creature comforts, you have to remember this is a middleweight naked, and that simple round LCD screen is practically and aesthetically a logical choice, displaying the basics, like a speedometer, tachometer, gear indicator, and fuel economy. There’s no traction control or cornering ABS for example, but smaller details, like self-canceling turn signals, LED lighting, adaptive brightness, and one-touch cruise control, are all things you wouldn’t expect in the segment either. All in all, you’ve got to take your hat off to CFMoto; the 700CL-X is a well-equipped, nicely balanced, and appealing addition to the middleweight category. Based on our short time with it, we think it’s a lot of machine for the $6,499 asking price ($6,999 for the Sport), and one way or another, it’s sure to move the needle for the company.

The US will also get the up-spec 700CL-X Sport version, which gets a solo seat, clip-ons, and higher-spec Brembo Stylema brakes to go along with a slightly higher price tag. (Andrew Cherney/)

Since the 700CL-X has now appeared elsewhere in three versions—the base model CL-X Heritage, the more cafe-styled Sport, and finally, the Adventure—we know the design has been finalized, so it’s fair to say the model will look pretty much as we see it here when it hits US dealers mid-2022. 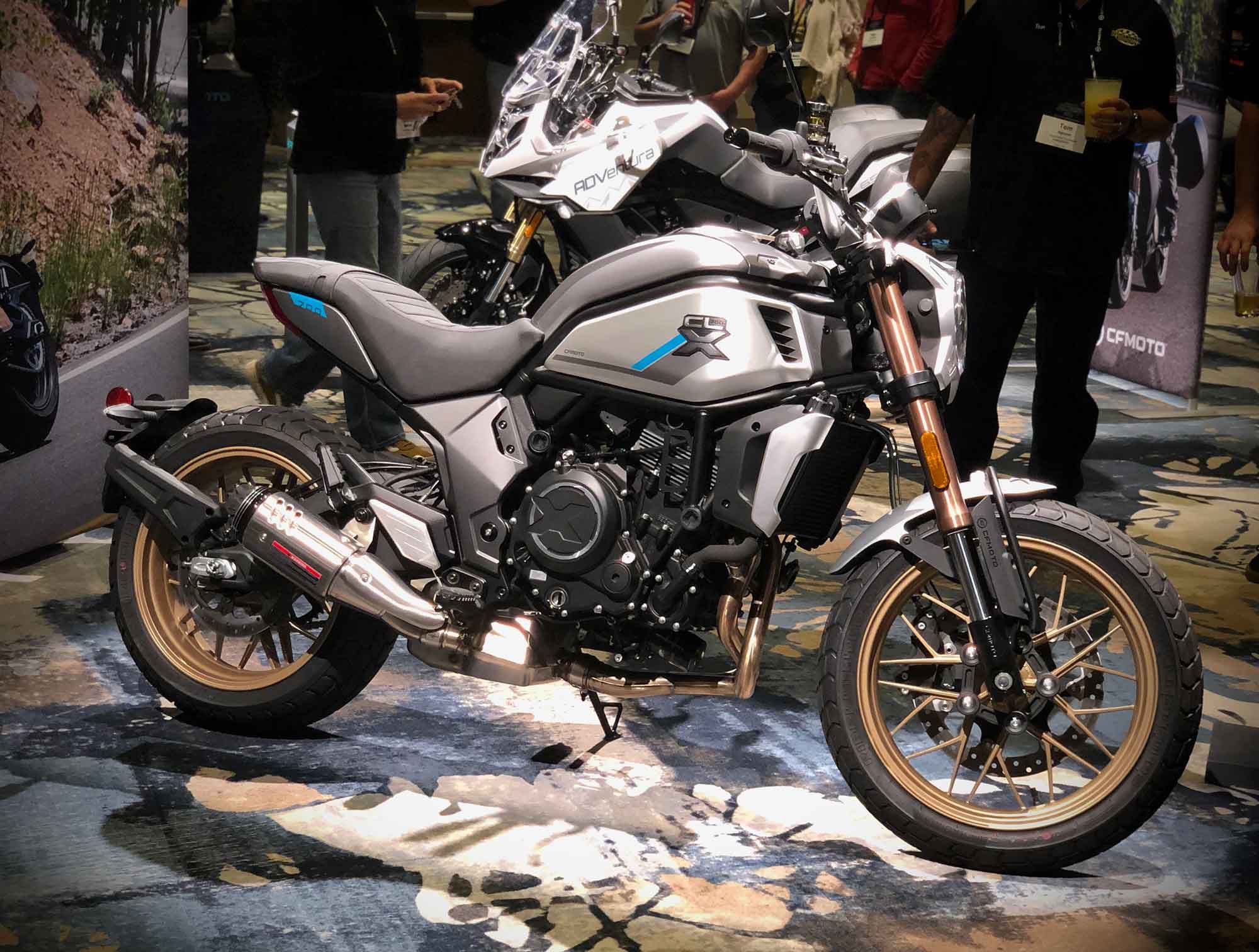 Blocky Pirelli MT 60s on the base model make for a scrambler-type vibe—much like the Ducati Scrambler Icon. (Andrew Cherney/)