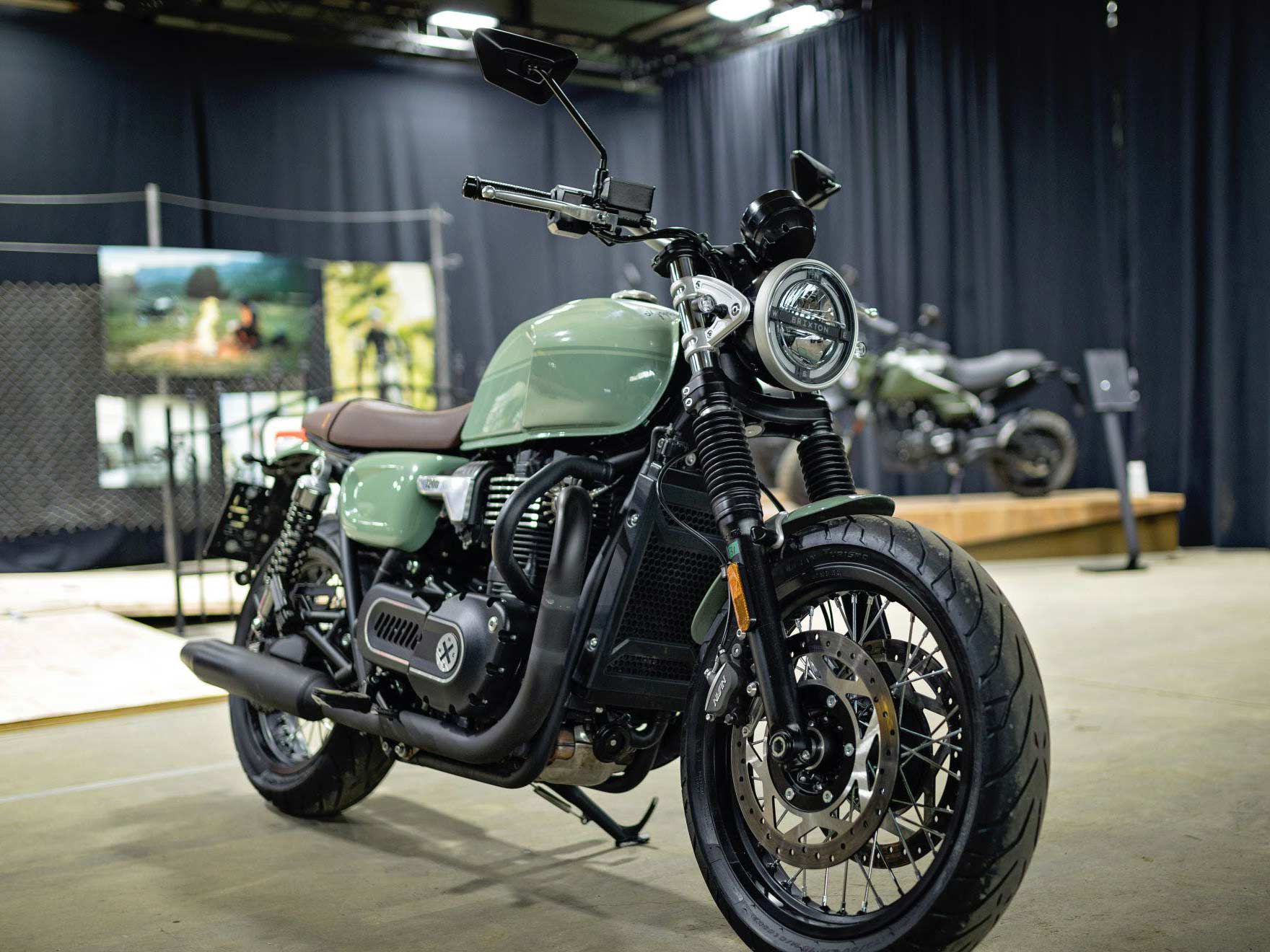 We had high hopes that Brixton Motorcycles would be unveiling its long-awaited 1,200cc Bonneville look-alike at EICMA, but the firm instead chose to quietly bypass the bigger Italian stage for a more intimate reveal of the production model in Austria earlier in November. Officially called the Cromwell 1200, the bike made its first in-the-flesh showing at parent company KSR’s HQ several weeks ago, confirming that it is, as suspected, a dead ringer for the Triumph Bonneville T120, right down to the engine layout and retro styling cues, and even some component choices. 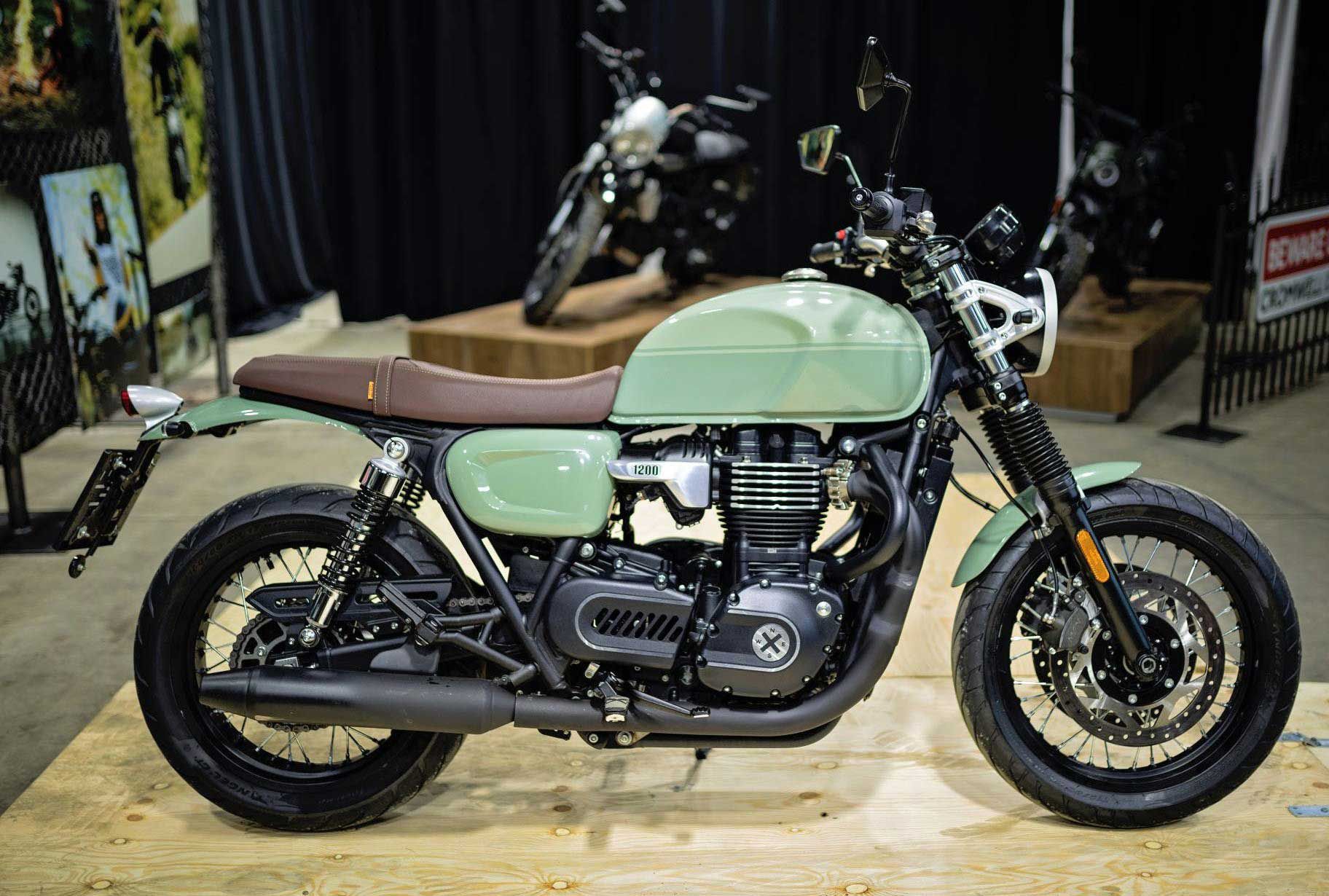 Three-dimensional renderings and drawings released earlier this year prepared us for visual similarities in the upcoming Cromwell 1200 (then called the M31) but these new photos finally give us some verifiable details of the bike’s retro 1960s Brit-bike references, with a round solo headlight, a familiar curved tank design, down to the knee indents and pads on the sides, and a nearly identical engine silhouette to the Bonneville, with vertical twin cylinders and a vertical radiator arrangement, all culminating in long dual exhausts (which at least aren’t peashooter-style) and topped by a flat, two-person bench seat that’s nearly the same height as the Bonnie’s. They even threw a pair of fork gaiters onto the right-side-up KYB telescopic fork. 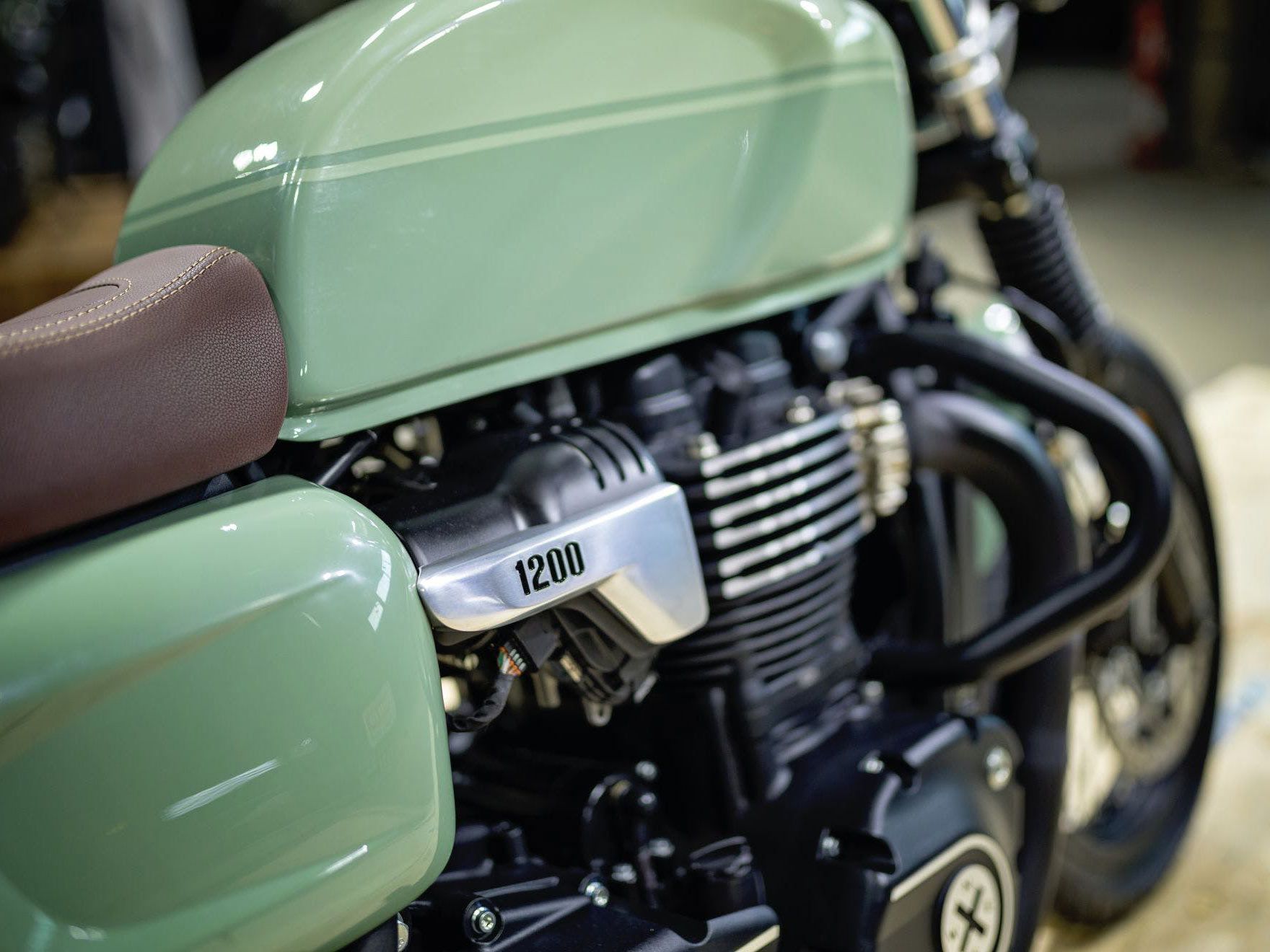 ABS, ride-by-wire, cruise control, traction control, and a TFT display are some of the modern concessions included on the Cromwell. (Brixton Motorcycles/)

But the main focus, of course, is the 1,222cc liquid-cooled engine, Brixton’s largest to date, and a close match to the Bonneville’s 1,198cc parallel twin architecturally as well as in claimed performance. The Cromwell’s fuel-injected twin also uses a single camshaft rotating in the cylinder head to actuate four valves per cylinder, and is liquid-cooled. The six-speed gearbox is allied to a chain drive, and the dual exhaust system locates the catalytic converter in front of the engine housing as well, just as on the Bonneville. There’s ride-by-wire fuel injection, and Euro 5 compliance is a given for both.

The spec sheet doesn’t tell the whole story though; key numbers like bore and stroke, wheelbase, and rake are left out, but the claimed performance numbers for both bikes are likewise in the same neighborhood. The T120 claims a peak of 79.9 bhp at 5,500 rpm, while the Brixton’s peak power is a touch higher and arrives later in the rev range, with 80.5 hp at 6,500. Torque peaks are also nearly identical, with the Brixton’s 79.4 pound-feet just a touch higher than Triumph’s claimed 77.4, both coming at 3,500 rpm. Although those numbers are quoted on the Brixton website, they still may change slightly before actual production. 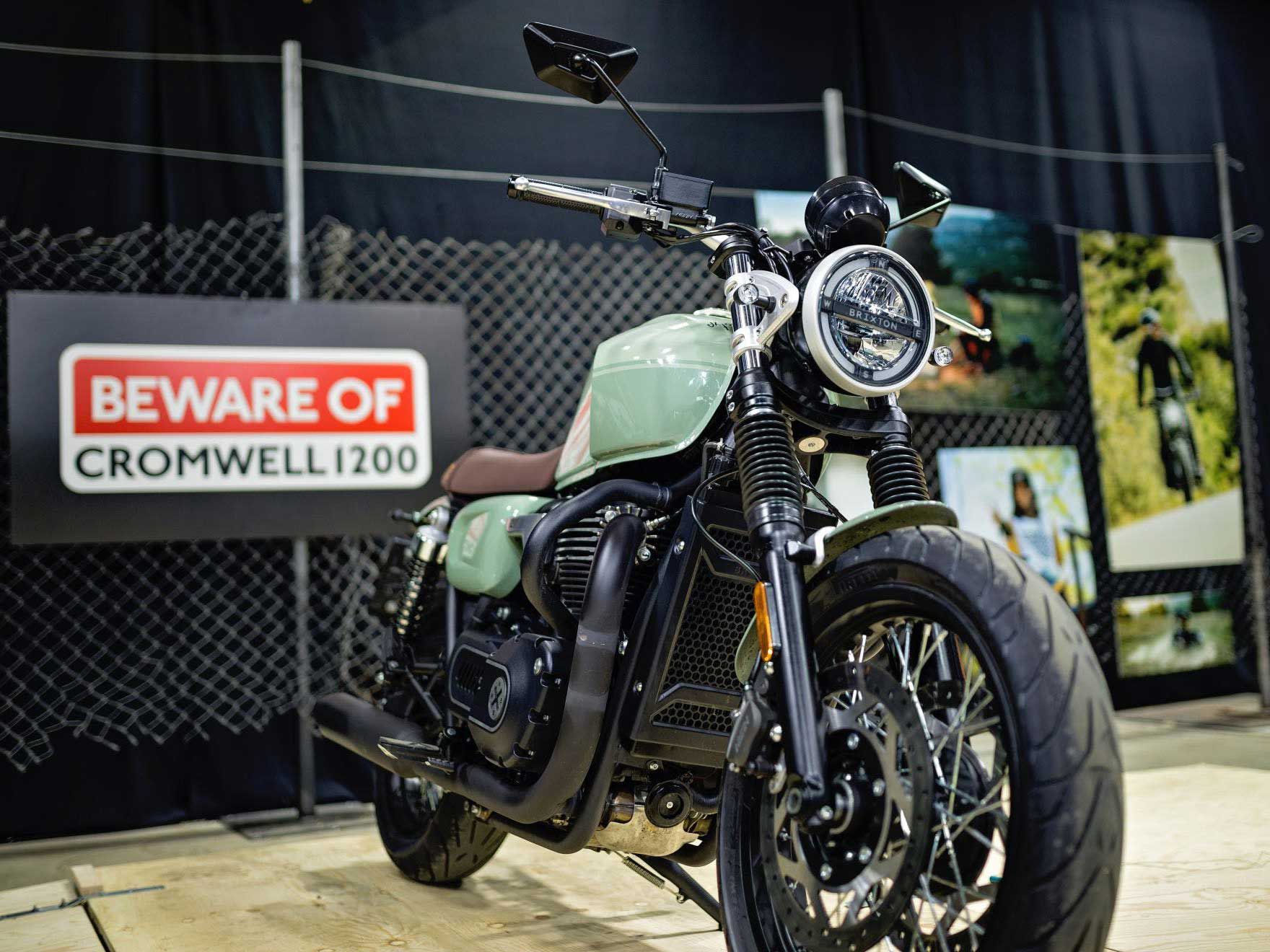 Bonneville-inspired? Whatever the term, there’s no question the Cromwell shares a good deal with the Triumph, from outward dimensions and styling to engine layout to outright performance numbers. (Brixton Motorcycles/)

Brixton also chose appropriate components and electronics for the Cromwell 1200, sourcing KYB suspension both front and rear, a dual-disc (upfront) Nissin braking system with Bosch dual-channel ABS, LED lighting all around, and a round TFT display in the cockpit. You also get traction and cruise control as well as two riding modes—Eco and Sport—and an anti-theft key system, so while the bike is not exactly loaded with the latest tech, it’s more than adequate for the class.

With the Cromwell 1200′s launch also comes flagship status, as it’s Brixton’s biggest bike to date; there are existing and similarly styled 125 and 250cc Cromwell models, with which the 1200 shares design language, but this bike is surely the highlight of Brixton’s range for the 2022 model year. Given that, the 1200′s price should be appealing to those looking at cheaper Triumph alternatives; even with a slightly larger-displacement engine, the Cromwell 1200 is positioned to be more affordable than the T120, with a preliminary MSRP of 9,999 euros according to Brixton (the T120 is currently priced at $12,300 USD). 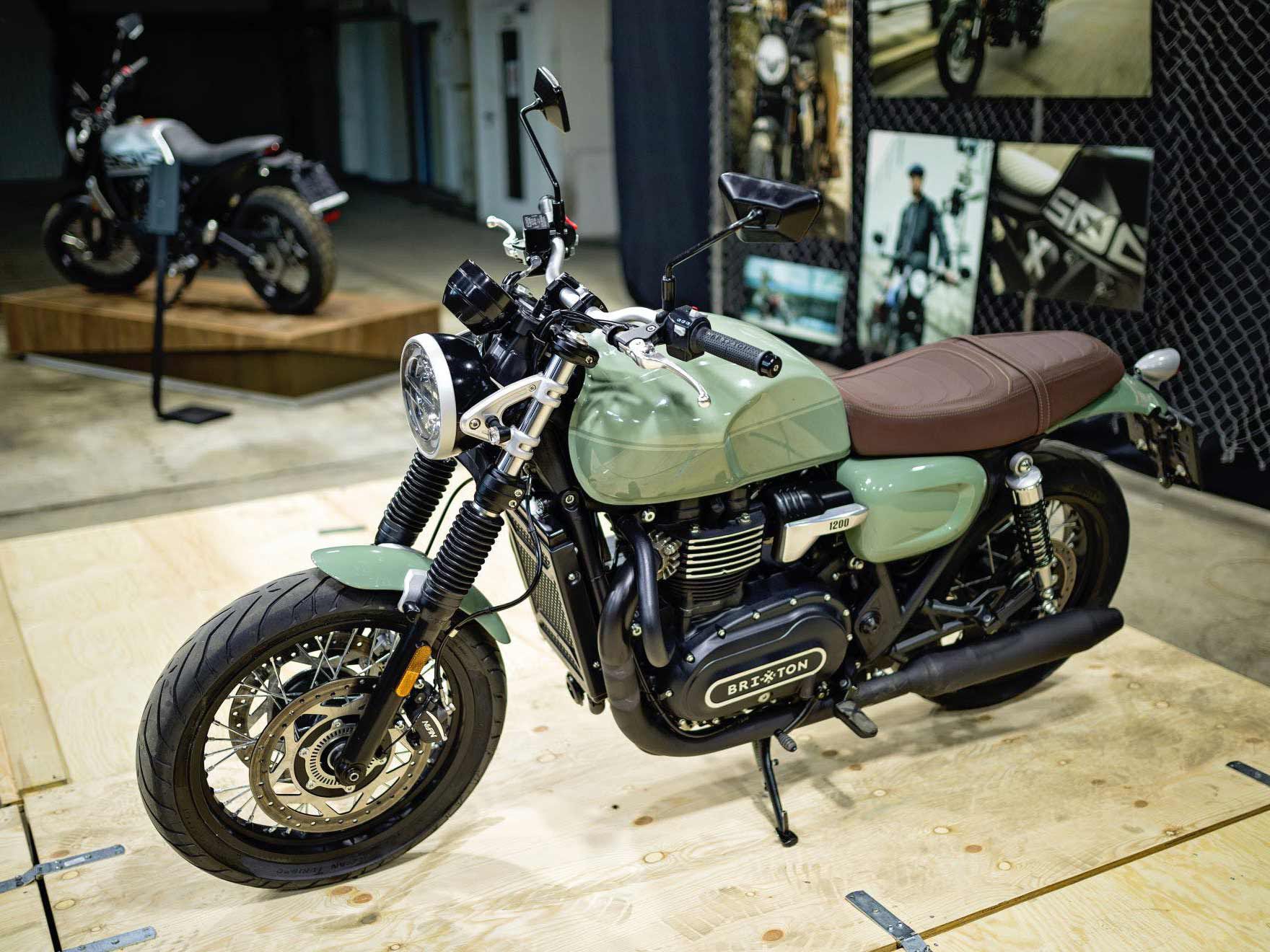 Brixton suggests a starting MSRP of 9,999 euros for the Cromwell when it goes on sale in Europe in the spring of 2022. Will we see it here? The firm’s website says North America is “coming soon.” (Brixton Motorcycles/)

The Cromwell 1200 is the most robust offering yet from the brand, so it’s curious that Brixton chose a more low-fi approach to the launch of what’s likely its most important model. Although we figured an EICMA unveiling was a given, the company focused on its smaller-displacement models at that show rather than the more highly anticipated Cromwell. That’s probably because the European market is Brixton’s stomping ground at this point, and where it sees the most interest in its products, the majority of which are under 500cc. The firm’s parent company—the KSR Group—sites its HQ and recently opened design center (where the Cromwell was designed) in Krems, Austria, though the bikes are produced in China by Gaokin.

In Europe, the Cromwell 1200 is due to go on sale in February of 2022, but for now, the company has no dealers in the North American market, though the bike (and others in the Brixton catalog) seems like it’d be a natural fit for US roads and riders.