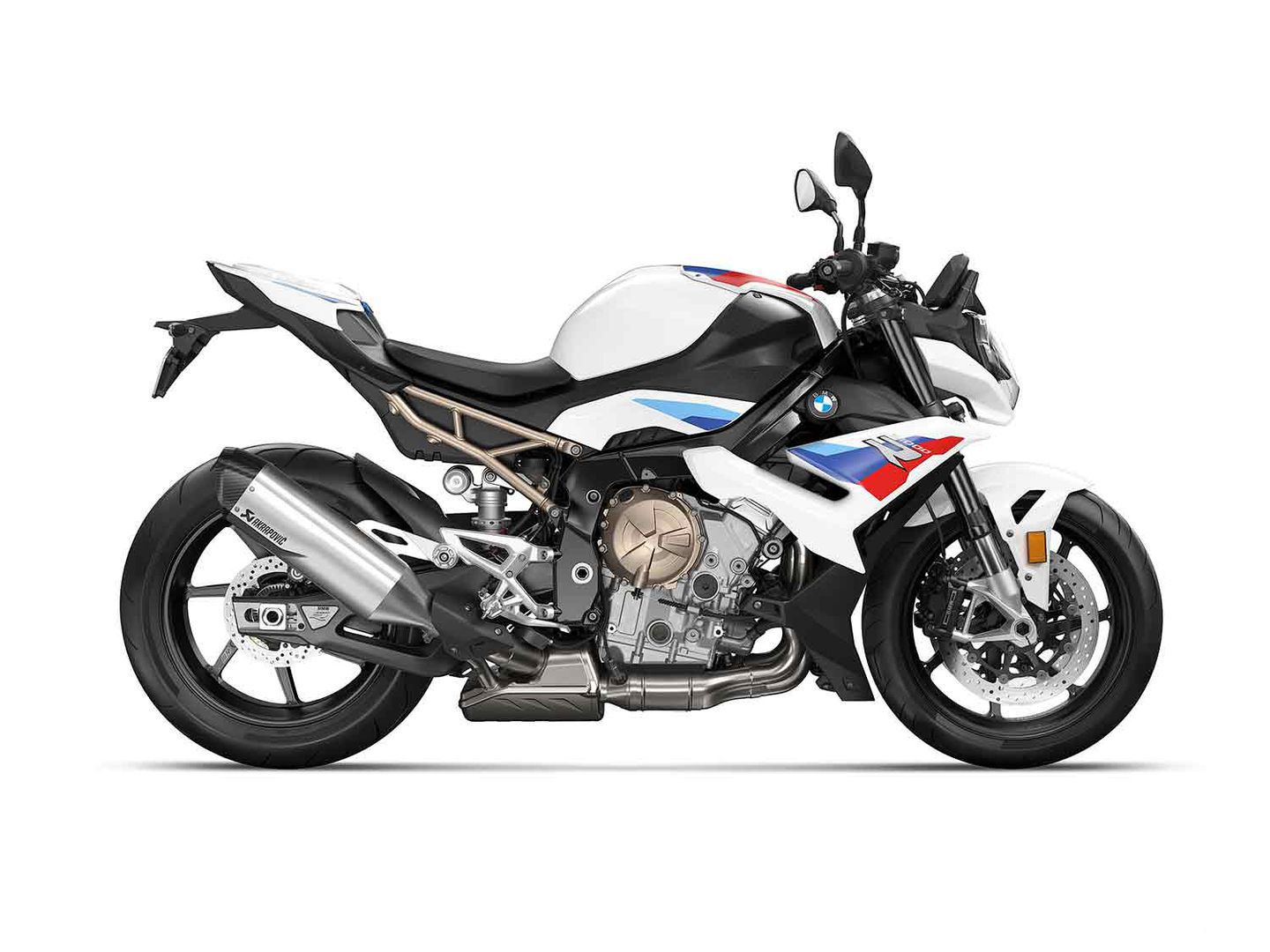 The S 1000 R is versatile providing an exhilarating riding experience regardless of whether you are on the open road or closed course. 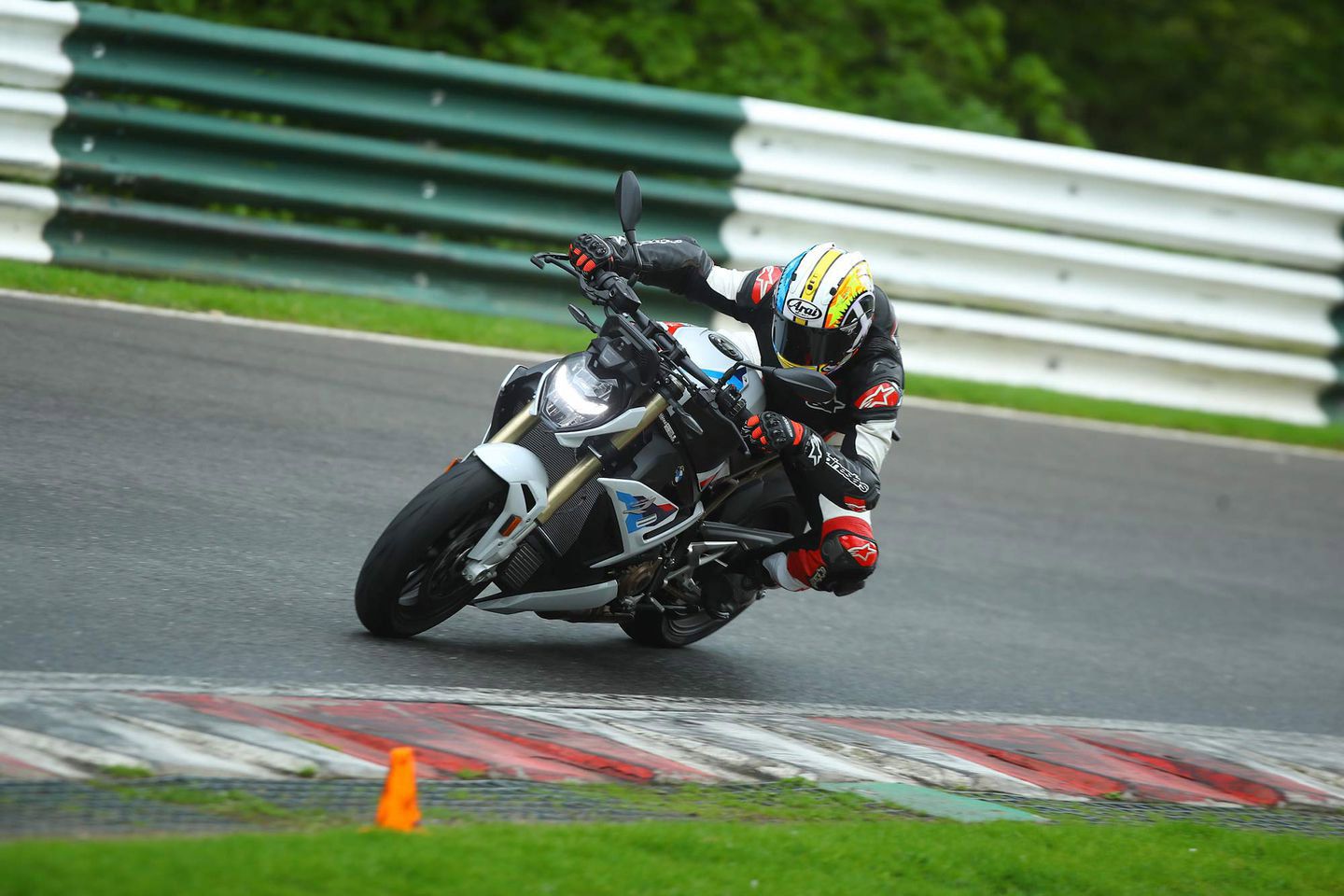 The BMW S 1000 R is a naked bike that is heavily derived from the Bavarian manufacturer’s S 1000 RR superbike in engine, chassis, and technology. It shows, because during our first ride review it proved it’s a versatile motorcycle suitable for both road and track action.

The S 1000 R sees big changes in 2022, beginning with its 999cc inline-four powerplant’s basic components and structure derived from the S 1000 RR superbike. The new engine meets Euro 5 emission standards, while being a claimed 11 pounds lighter than its predecessor. Internal ratios of fourth, fifth, and sixth gears are longer, aimed at reducing engine vibration and improving fuel consumption.

Along with the engine, the S 1000 R also adopts a new chassis to accommodate the narrower engine structure. It’s so-called Flex Frame is slimmer and utilizes the engine as a stressed member. Steering geometry has been adjusted as has the rider triangle.

There are two variations of the S 1000 R, the base ($14,545) and the M-series option ($18,345), which includes an Akrapovič titanium exhaust, Dynamic Pro mode (in addition to Rain, Road, and Dynamic), cruise control, heated grips, M-specific colors, carbon wheels, battery, and the chain.

Power from the 999cc inline-four has not changed despite Euro 5 compliance; it remains at a claimed 165 peak horsepower at 11,000 rpm. Instead, torque has gone up to 84 pound-feet at 9,250 rpm and is claimed to take advantage of a flatter torque curve. During testing, we found the power to be usable and far from intimidating. “The throttle connection is lovely, the rider aids superb, and, in Rain and Road modes, power is limited in the lower gears, enabling less experienced riders to get on the gas sooner.” Additionally, longer fourth, fifth, and sixth gears deliver power more smoothly for touring speeds. Road mode is reported to be very forgiving as Dynamic and Dynamic Pro (M-series) help unleash the fun and all provide excellent fueling. 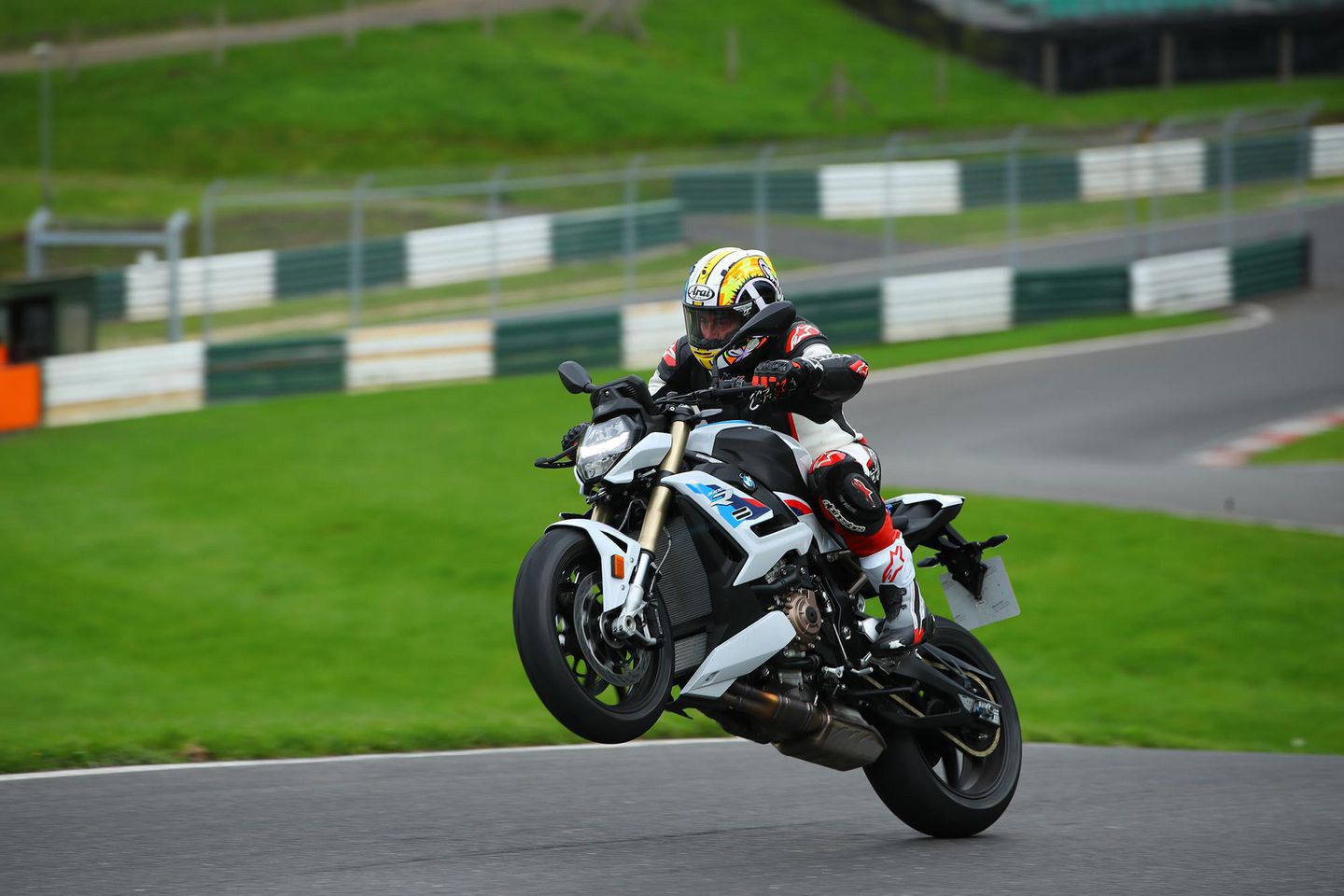 The updates to the 2022 BMW S 1000 R’s chassis and 26-pound weight loss make the motorcycle significantly more agile and rider-friendly, according to Adam Child’s first ride review on Motorcyclist. “The new S 1000 R feels much lighter and more agile,” Child says. “I was genuinely surprised by how flickable and friendly the BMW is. This lack of bulk, combined with such a user-friendly engine, makes the S 1000 R more forgiving than ever. Around town, it is a breeze to ride.”

Four-piston radial calipers and dual 320mm discs and one-piston floating caliper and 220mm disc make up the S 1000 R’s brakes. This BMW-branded system replaces the previous Brembo units and are pulled from the S 1000 RR. During track testing, these brakes were impressive. The machine’s lighter overall weight also helped limit stress on the radial brakes. Fuel economy has not been recorded or provided by the manufacturer.

The R’s ergonomics are aggressive, but adjustable with a dual-adjustable handlebar clamp and three different seat heights, one standard (32.7 inches) and two optional (31.9 and 33.5 inches). Passenger accommodations require a purchase of a pillion and peg kit. 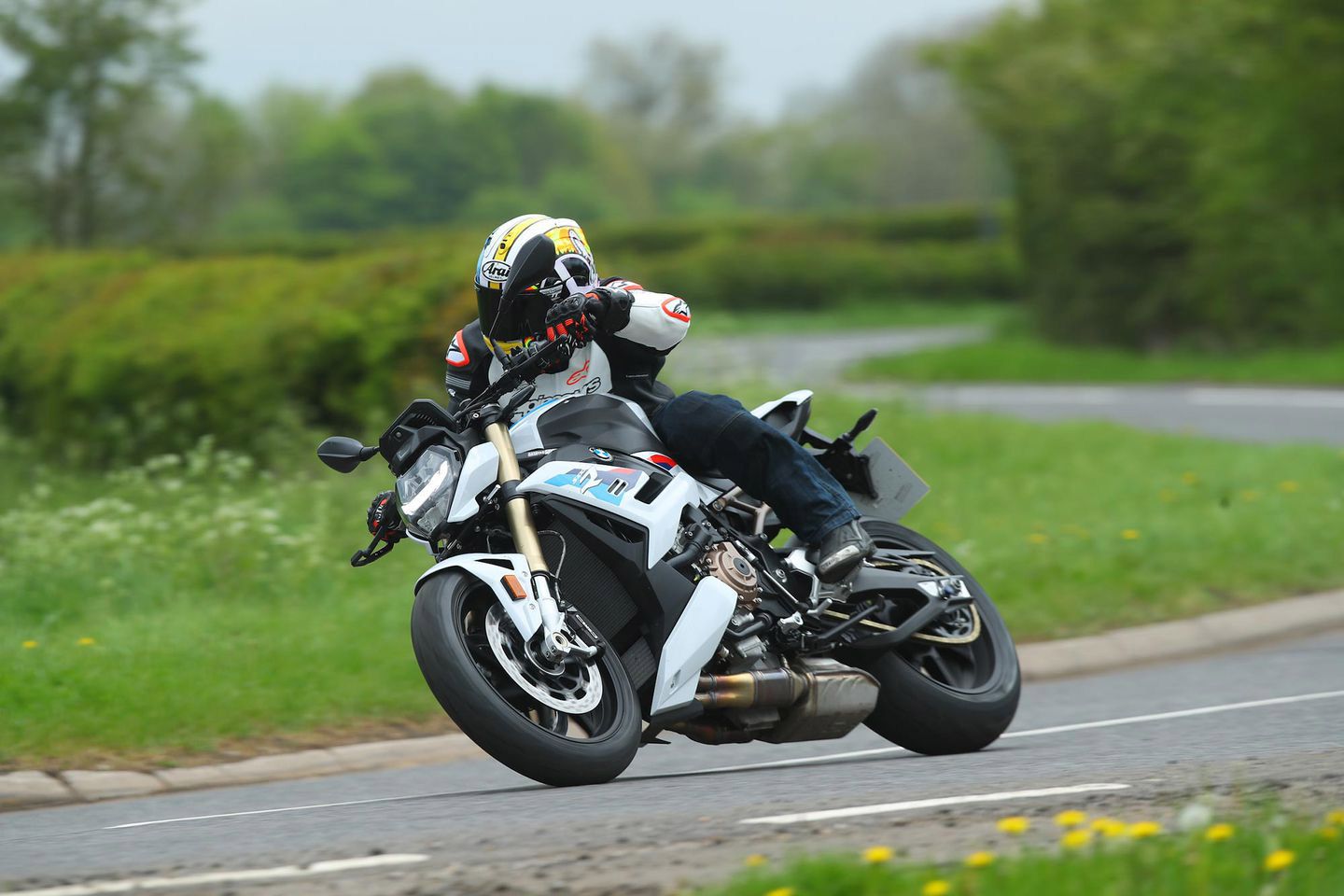 The S 1000 R is equipped with a sophisticated electronic rider-aid suite managed by a six-axis IMU, just like its superbike sibling. The system includes Dynamic Traction Control, wheelie control, hill start control, and three selectable riding modes: Rain, Road, and Dynamic. All is accessed via the 6.5-inch TFT display we have come to love on the S 1000 RR.

A three-year/36,000-mile warranty is included in the purchase of the new motorcycle.

The S 1000 R, M-series in particular, hits the high-quality mark right on the head with carbon wheels and M-specific colors and features. 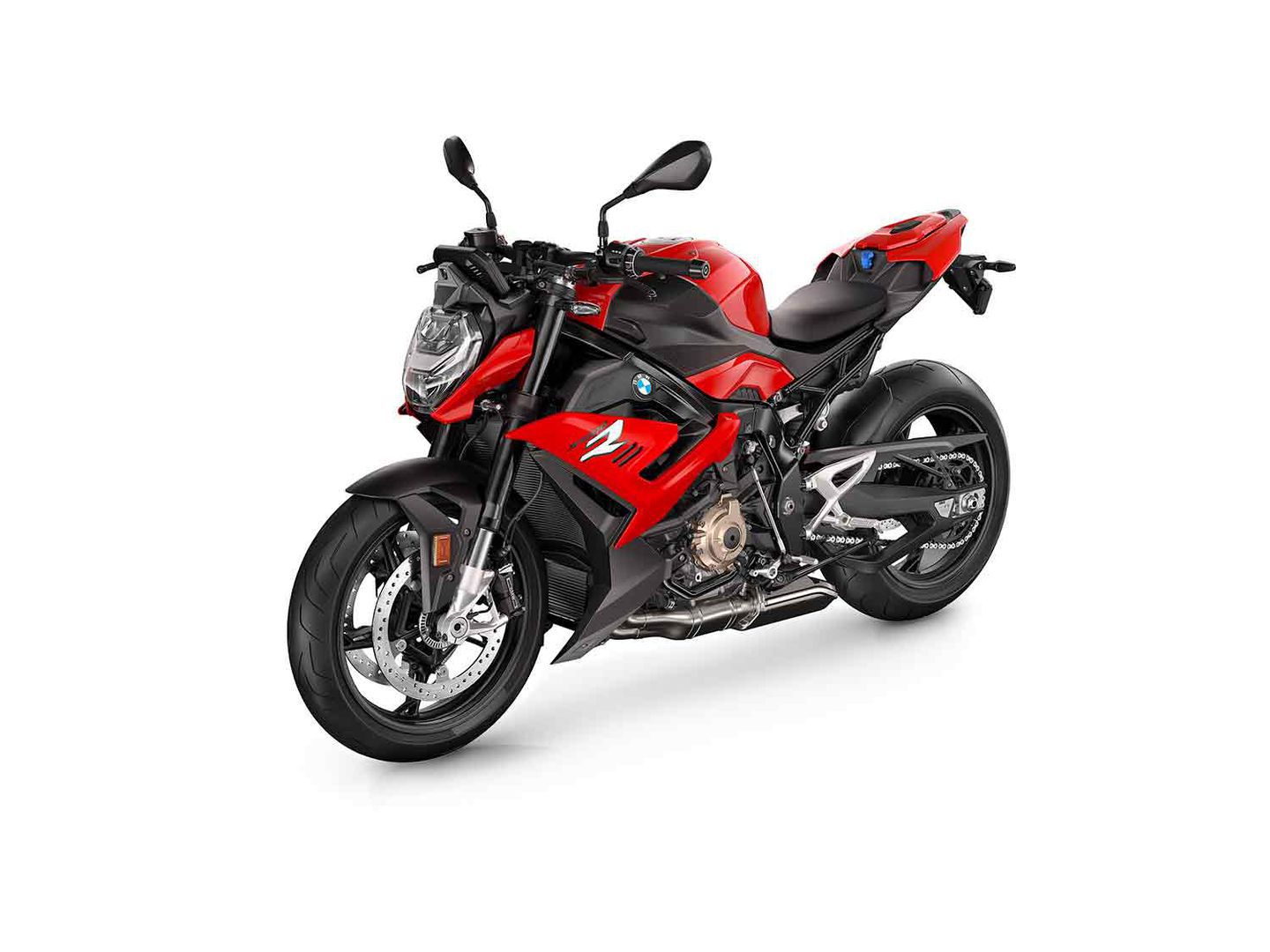