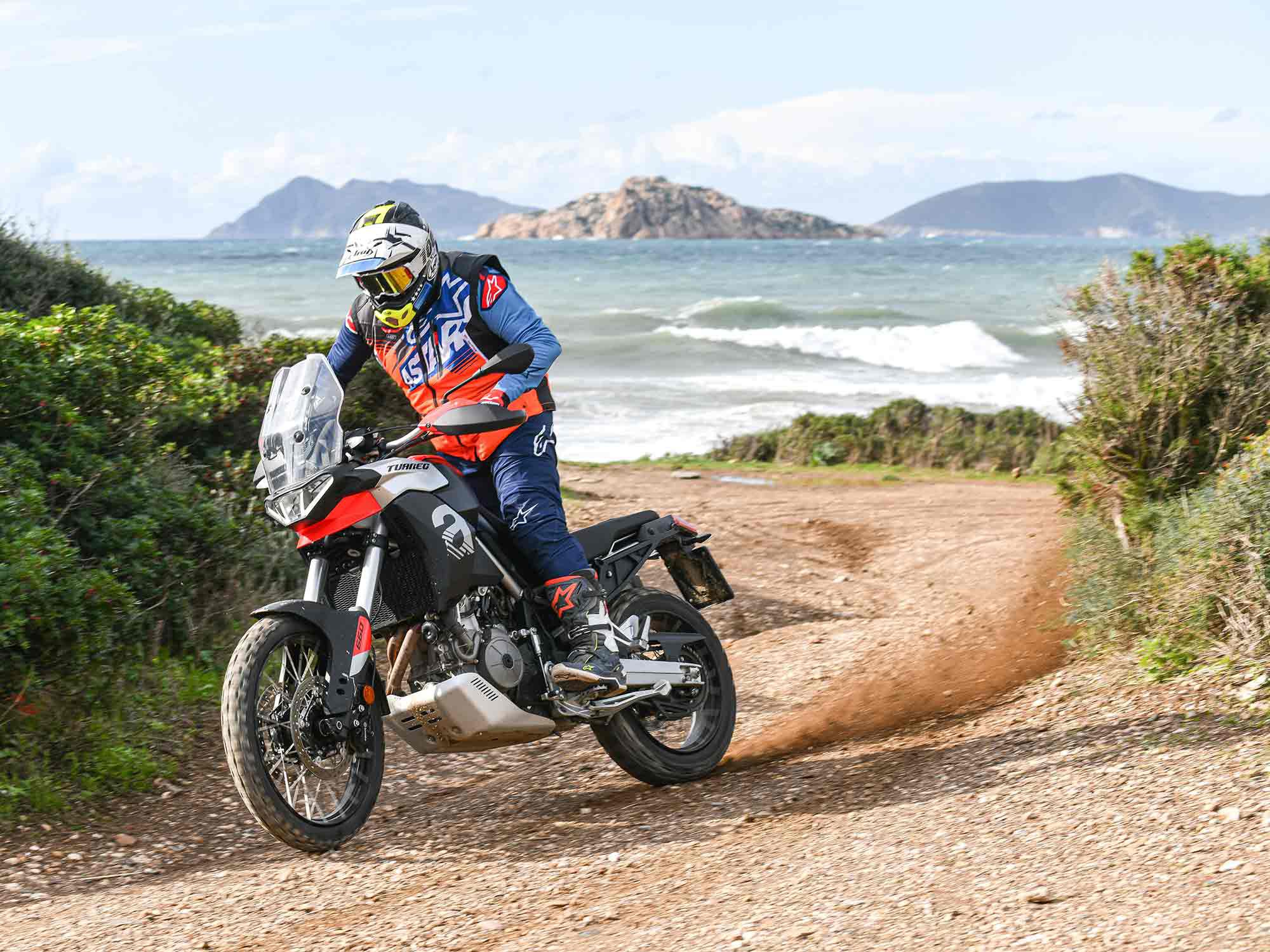 Earlier this year I traveled to Noale, Italy, visiting Aprilia for an early ride of the upcoming 2022 Tuareg 660 adventure bike. While the bike was missing most of its electronic aids and there were still some changes to be made in the chassis, it was 95 percent there; l was impressed. I’ve been looking forward to a ride on the final production unit, and now the 2022 Aprilia Tuareg 660 is officially ready for public consumption. This time I traveled to the Italian island of Sardinia for a complete picture of this new ADV rig’s capabilities and performance.

The Tuareg is powered by the very same 659cc parallel twin that powers the RS 660 sportbike and Tuono 660 naked. There are some changes; for instance, the Tuareg gets different camshafts to decrease lift and duration to tailor the bike’s torque and power delivery for adventure riding. But the basic architecture is the same, and Aprilia claims 52 pound-feet of torque and 80 hp, both coming in at lower rpm ranges than the sporting street models. Aprilia also says 75 percent of that torque arrives below 3,000 rpm and 90 percent at 5,500 rpm.

Since my first ride in August, the Tuareg has seen a couple of notable changes. The most important is a 5 percent shorter first-gear ratio for a little more response during technical off-road situations. That same change would have been useful in second gear as well, as I was looking for more pop when I needed to get the front end light when riding off-road. Final gearing is also 10 percent shorter, with a 15-tooth front sprocket and 42-tooth rear versus the other models’ 17/43 gearing. Even so, I feel a larger rear sprocket might be in order if you aim to spend most of your time in the dirt. Gear changes were solid all day; our test units were equipped with the $249 add-on Aprilia Quick Shift. 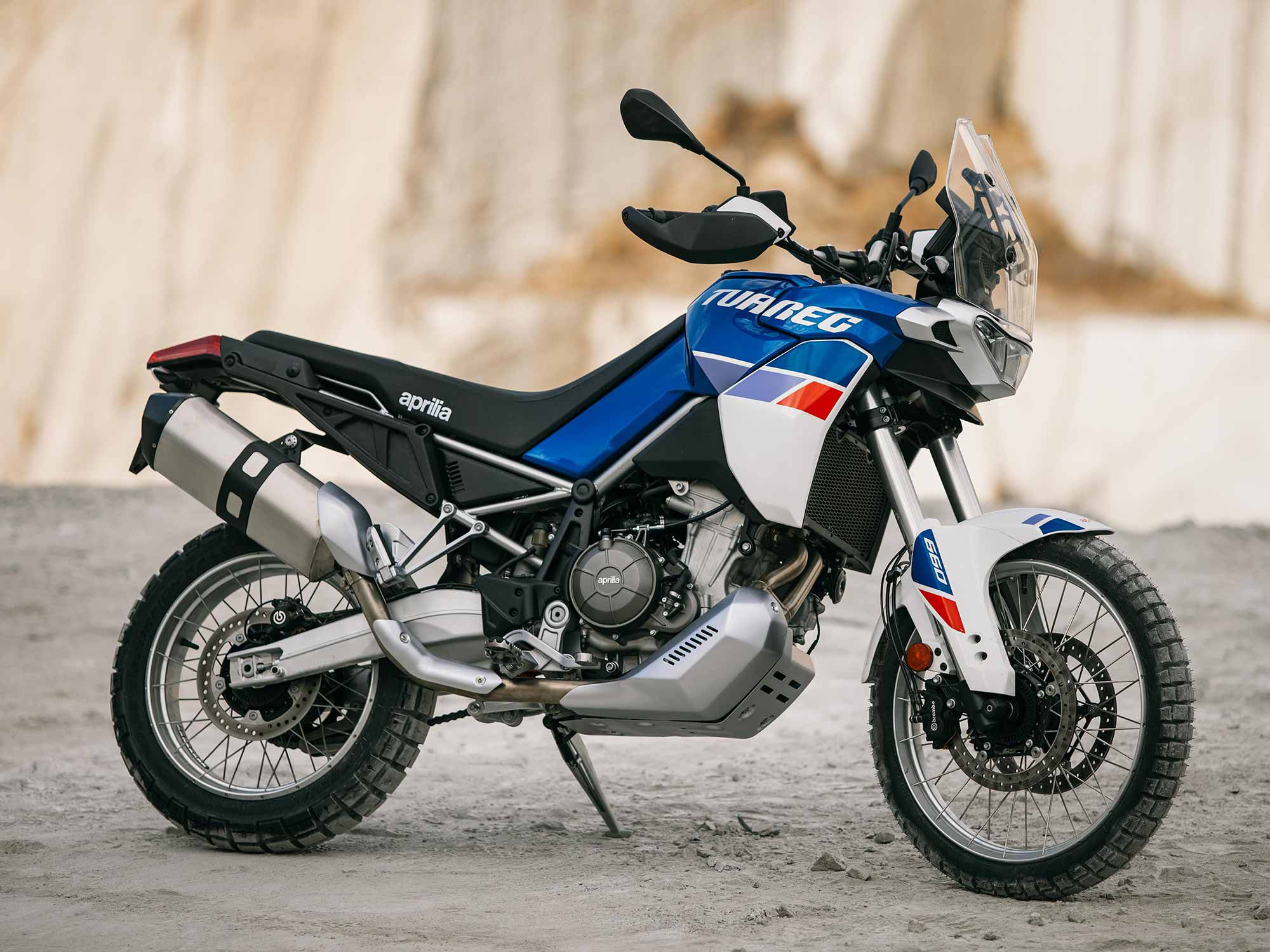 For an additional $600 you get the white/red/blue paint with silver wheels. MSRP for the standard colors is $11,999. (Aprilia/)

Despite wanting more bottom-end—it’s never enough, until it’s too much—the connection between throttle and rear tire is linear and easy to control. Four ride modes are offered by the Aprilia Performance Ride Control (APRC) system: Urban, Explore, Off-road, and Individual. Each gets all 80 ponies, but the response is varied. Urban is the most muted, followed by Explorer; Off-road has the most aggressive response. You can adjust the traction control quickly through four levels within each of those modes; engine-braking is also adjustable. ABS is activated for both wheels in Urban and Explore, while Off-road cut the rear ABS. You can also disable the ABS completely in Off-road and Individual modes. As there is no IMU on the Tuareg, TC and ABS are not lean sensitive. Powering the Tuareg is the same 659cc DOHC parallel twin that is used in the RS 660 and Tuono 660. Camshaft and gear ratio changes are specific to adventure duty. (Aprilia/)

Even so, with the linear power delivery and manageable power, lean sensitivity is not missed. I preferred the lowest level of TC on Urban and Explore modes, even riding with it off for portions of the ride, as wheelies must be done from time to time. Setting engine-braking at the highest level added a snatchy feel to the throttle when rolling on and off for corners, a quick change to the lowest amount made midcorner throttle adjustments smooth. That’s APRC’s strong suit: the ability to make changes easily and on the fly to get the response and smoothness to your liking. Making changes to ride modes, TC, and ABS settings is quick and easy via a bright and clear TFT dash. (Aprilia/)

In the dirt, the off-road setting worked well. With the TC set at the lowest level the rear end kicked out predictably even in some very muddy corners. Turning TC off allowed the back to come around more aggressively, but again, the smooth and predictable nature of the parallel twin made it easy to manage traction. The front ABS was well calibrated for Sardinia’s dirt roads, and even when pushed hard, the braking does an excellent job of managing the available traction. I turned ABS off, but found it easier to ride quickly with it on. Lever response and feel from the front brake is excellent in the dirt and merely great on the street. The rear brake is a little vague in the dirt, but has good feel on the street. 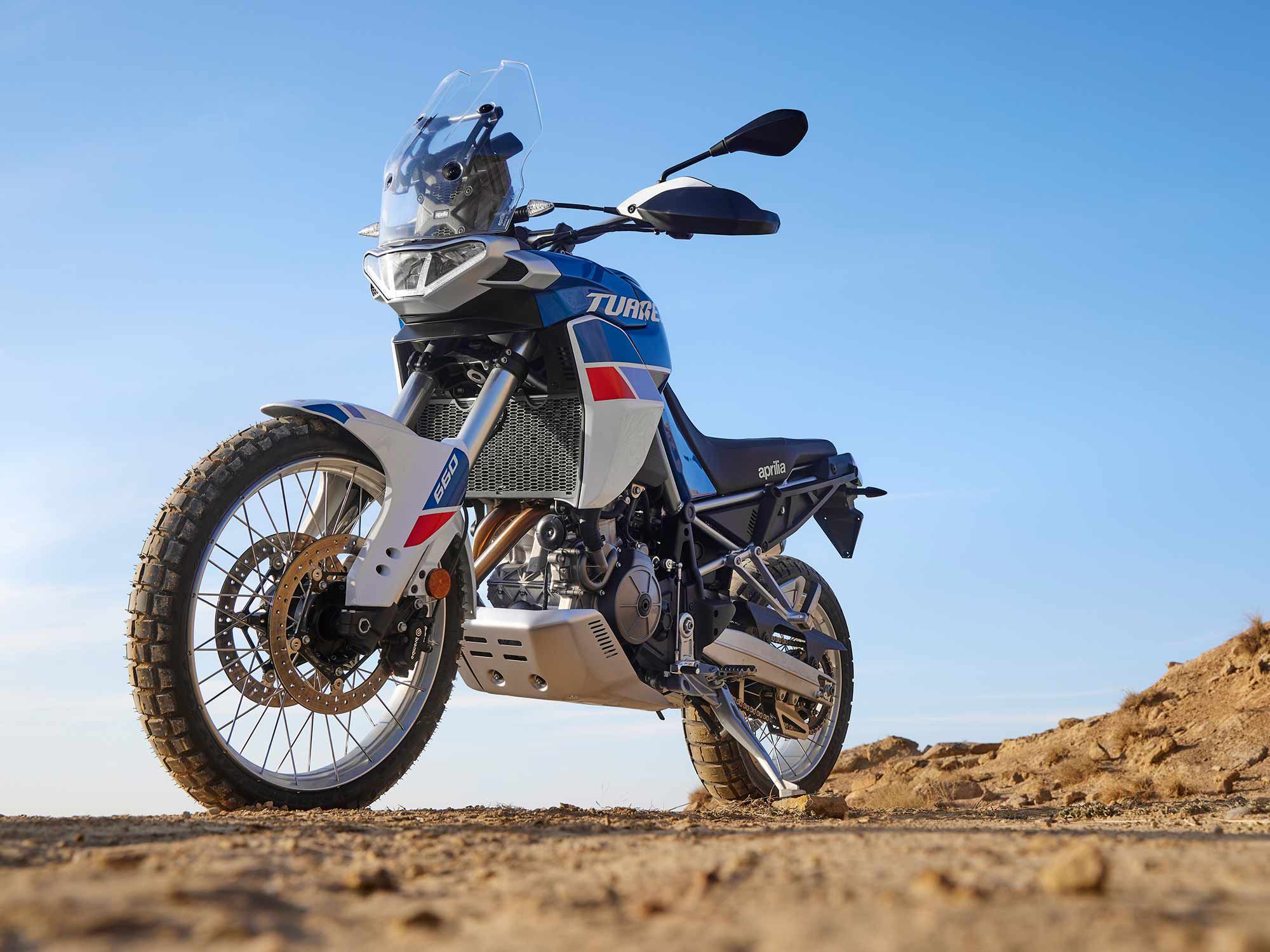 Kayaba suspension front and rear is fully adjustable and strokes through 9.4 inches. (Aprilia/)

The definition of off-roading varies from continent to continent, and our time in the dirt on Sardinia was tame; we rode what were basically dirt roads in the mountains that had been recently soaked by thunderstorms. The 20-ish miles we rode did show off the basics, but I struggled to grasp the true performance of the Tuareg’s steel chassis and fully adjustable Kayaba suspension. It worked great for this moderate usage case, but what would happen in the big country of the US?

Luckily, Aprilia set up an off-road loop/track behind the resort to let us see what’s what. Here I was blown away by the Tuareg’s chassis. Dual rate springs in the 43mm fork and a progressive linkage attached to rear shock offer a nicely balanced ride in the small chop and bumps at any speed, but there is plenty of hold-up when you blast it into a corner hard. And it can corner hard, especially when a ride sits down in the corner. Motocross-inspired cut and thrust maneuvers are possible as the 660 squares off turns amazingly well while sitting down. Standing up it also smashes a predictable line, despite the moderately aggressive Pirelli Scorpion Rally STR tires constantly searching for traction. There were a few rock gardens strewn about the track; the Tuareg smashed through these straight and true without any clanking or metal-to-metal bottoming from the 9.4 inches of suspension travel at both ends. The same applied over the track’s few small jumps when the bike left the ground—it was rock solid, composed. Most think the selling point of the Tuareg 660 is the engine, but truly it’s the chassis. And as good as it was off-road it was just as good on the street.

Sardinian roads are ridiculously grippy, but as the weather was cold and damp I expected that we’d be tiptoeing our way around the southern part of the island. As it turned out, shred level was set at an eight or nine all day, and the Tuareg proved to be an honest-to-goodness Aprilia. Tip-in is light, and its 450-pound wet weight responds quickly to rider inputs; however, this doesn’t mean it’s twitchy or nervous in any way. Midcorner the bike is rock steady even when the pavement is bumpy or cracked. It won’t hang with its RS and Tuono siblings, but it is one of the best midsize ADVs I’ve ridden on the road. 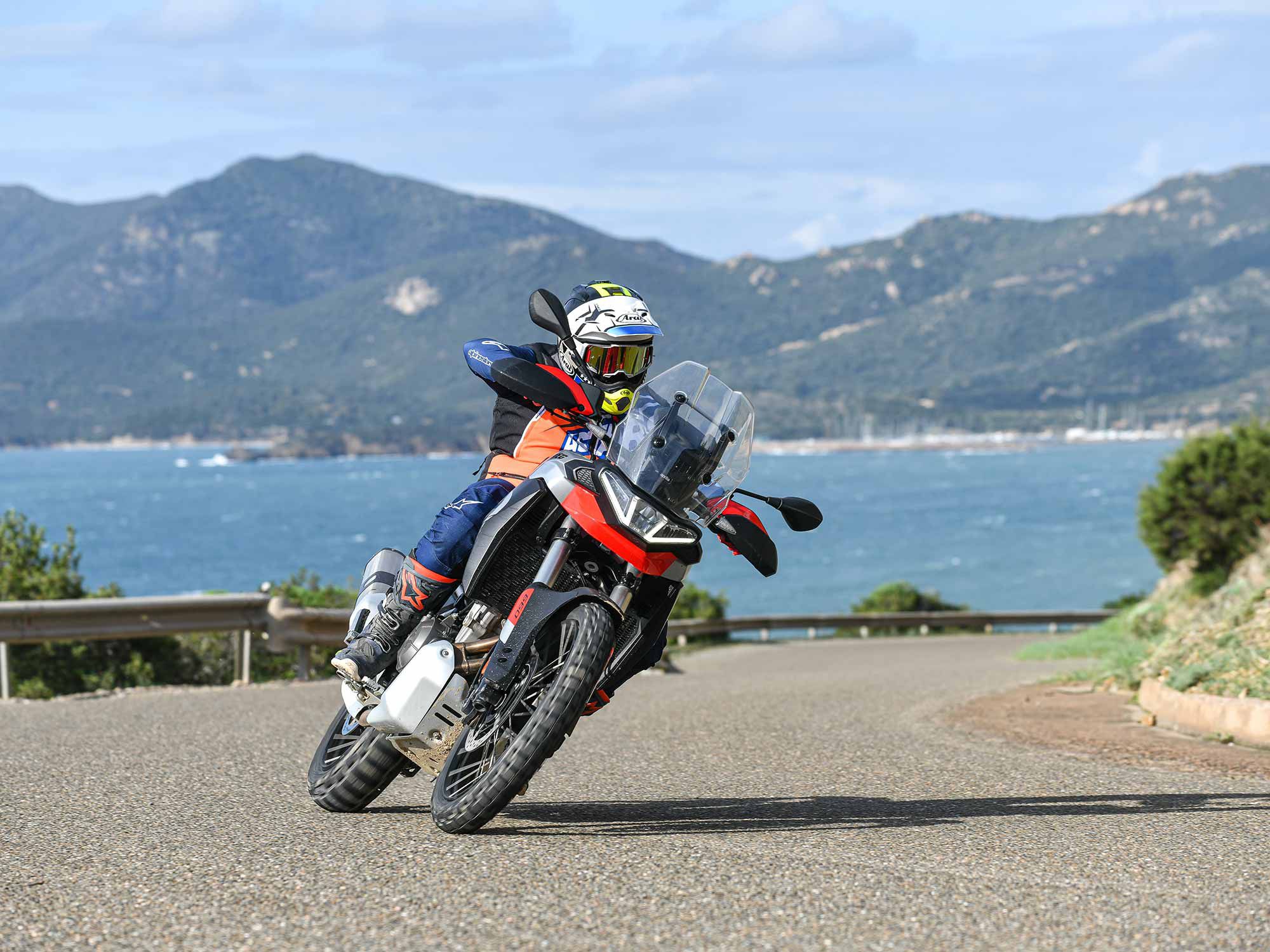 On-road performance is just as impressive if not more than the Tuareg 660’s off-road capability. (Aprilia/)

Another notable change from the preproduction unit is the seat shape, which has been modified with a less steeply angled front to allow riders to more easily move up toward the tank. A narrow shape makes reaching the ground easy with my 30-ish inch inseam despite the 33.9-inch seat height claimed by Aprilia. The shape is great, but when off-road and sitting I did find the hard plastic edges of the seat pan more than a few times. I’m a big dude and weigh close to 250 pounds with all of my gear on, so lighter riders might not need to worry. The rest of the ergonomics fit my 5-foot-10 frame well. Furthermore, air management from the nonadjustable windscreen is great, flowing the air right over my head at highway speeds. 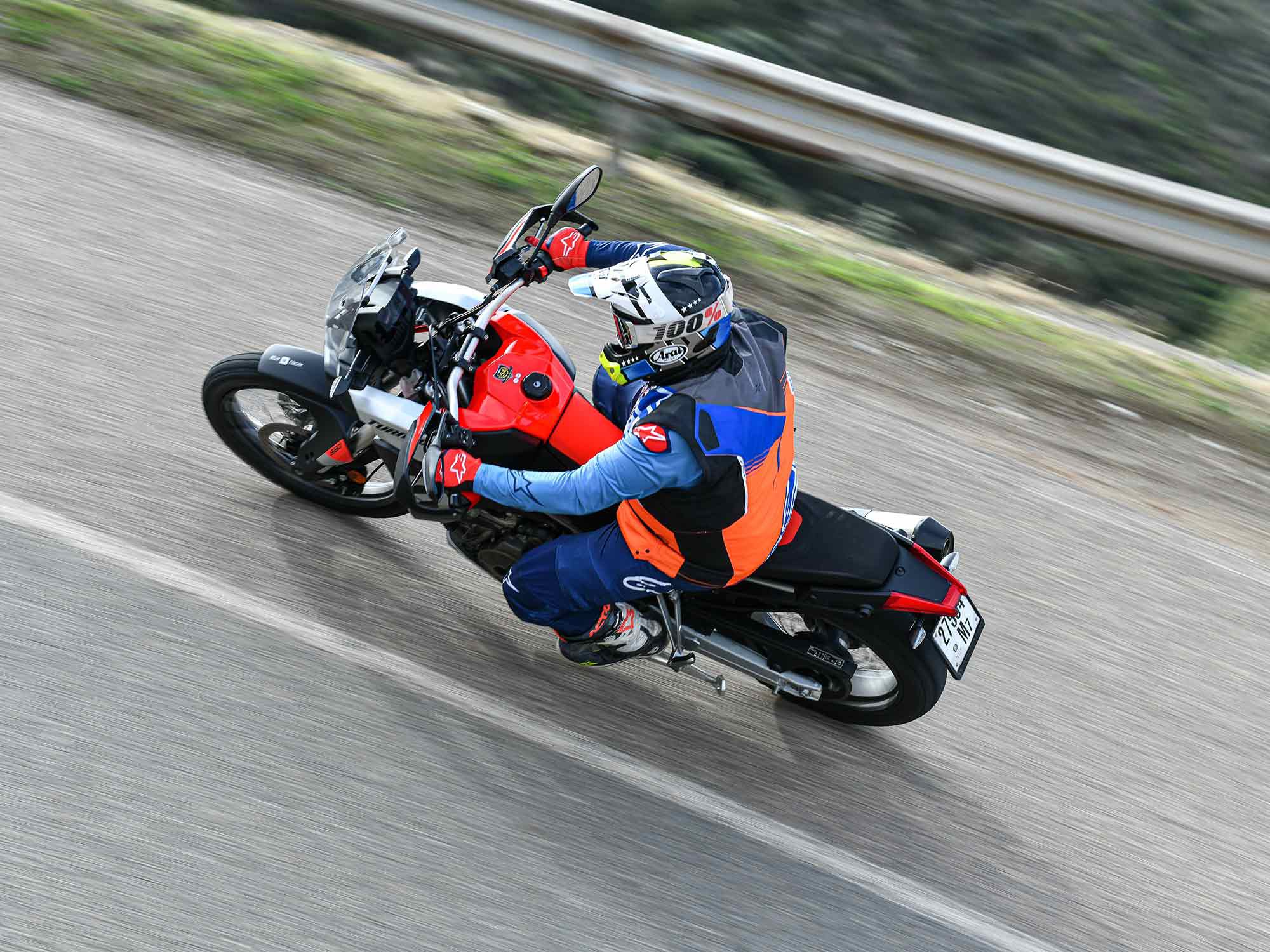 Ergonomics on the Tuareg 660 are excellent for a midsize ADV. (Aprilia/)

Aprilia has nailed the sweet spot of midsize adventure motorcycles. The Tuareg handles both road and dirt duty with excellent manners, has an engine that’s easy to use but will satisfy your need for speeds, and incorporates some of the best electronics available. It’s also priced right in the middle of the segment at $11,999; the white/red/blue paint will cost you another $600, however.

Every time I ride the Aprilia Tuareg 660 it gets better. I can’t wait to see how it will do in the deserts and mountains of Southern California.