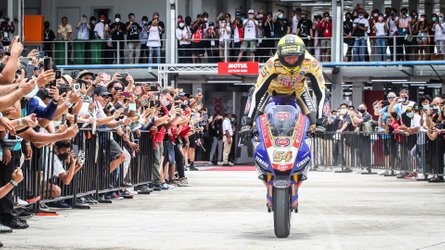 After a hard-fought, season-long battle with six-time Superbike World Championship (WSBK) titleholder Jonathan Rea, Toprak Razgatlioglu claimed the WSBK crown at the last event on the 2021 season calendar. While the drama played out on track, it also played out in the Yamaha racing family.

When MotoGP rider Maverick Vinales left the Yamaha factory team in August, 2021, the move sent ripples through not only the Grand Prix paddock but also the WSBK ranks. Team Blue moved Petronas SRT rider Franco Morbidelli into the vacant factory slot for the remainder of the year, but with Andrea Dovizioso joining the satellite team and Valentino Rossi exiting by the end of 2021, Yamaha’s musical chairs were in full swing.

During that time, Iwata had several Yamaha racers on its shortlist, including Moto3 Petronas SRT rider Darryn Binder and WSBK Pata Yamaha front-runner Toprak Razgatlioglu. Unfortunately, El Turco wasn’t ready to commit to a transition to MotoGP without the WSBK secured. As a result, Yamaha awarded the satellite squad seat to Darryn Binder, but that didn’t close the door for the newly-crowned WSBK champ.

“I’ll try the M1 in 2022 in a few private tests,” Razgatlioglu revealed to GP One. “On the days I’ll be on the road with Cal Crutchlow and hope to make my MotoGP debut in 2023, even if my full concentration is on the Superbike World Championship and the coming season.”

Of course, Cal Crutchlow is a three-time MotoGP race-winner and current Yamaha Factory Team test rider. Based on the fact that the Turkish rider called out Crutchlow alone also points to the tests being a Yamaha exclusive session, but that doesn’t rule out the pre-season MotoGP tests at Malaysia’s Sepang Circuit or Indonesia’s new Mandalika Circuit.

“We are planning a private test and maybe take part in an official part, if the timing suits our calendar,” Razgatlioglu’s Manager and five-time WSSP champion Kenan Sofuoglu told Speedweek. “We haven’t confirmed an appointment yet, but I assume that Toprak will be on a MotoGP bike this winter.”

There may be a whole year between now and 2023, but hopefully, we see Razgatlioglu making his MotoGP transition at this time next year.