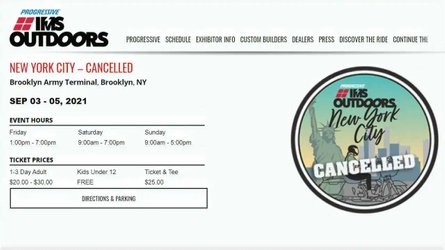 2020 was a strange and stressful year when most motorcycle shows were canceled. Those events that remained on the calendar mainly did so virtually. After all, motorcycle enthusiasts tend to care about our fellow riders, and we don’t usually want to see each other (or our families) get hurt, right?

If 2020 was the year of cancelation, 2021 has so far been a year of uncertainty. With vaccines rolling out in many countries, more motorcycle events have been cautiously planned this year than in 2020. This entire year has a caveat that events may be changed and/or canceled at any time.

As of August 9, 2021, two popular motorcycle shows just announced their cancelations. Both the Progressive IMS Outdoors New York City stop and the Handbuilt Moto Show in Austin, Texas will not be happening in 2021.

As our colleague Lance Oliver over at RevZilla’s Common Tread noted, organizers of both events took two very different approaches to announcing their cancellations. Now, for those of you who appreciate both motorcycles and cars, the NYC cancellation likely comes as no surprise. After all, organizers of the New York International Auto Show—which, for those unfamiliar, is one of the largest in the country—announced its 2021 cancelation just last week due to rising COVID cases. That show was originally scheduled to take place later in August.

The Delta variant has run roughshod over every region it’s visited so far. On August 9, 2021, Reuters reported that U.S. COVID cases are now at a six-month high thanks to the Delta variant. While it has so far been hardest on the regions of the country where a greater percentage of people are unvaccinated, even those who have been vaccinated can still both get and spread this variant in significant amounts. Vaccinated people mostly don’t require hospitalization, however.

We also can’t forget the fact that children under the age of 12 are not yet eligible for vaccination in the U.S. To make matters worse, hospitals across the country have reported a wider spread of more serious cases in children since Delta took hold than we’ve seen at any time since the beginning of this pandemic. No one, regardless of any other differences we might have, wants to see kids suffering.

Now, back to the two motorcycle show cancelations from today. For 2021, the Handbuilt Moto Show was originally scheduled to take place October 1 through 3, 2021 in Austin, Texas, concurrently with the MotoGP Circuit of the Americas date. Earlier today, organizers put a single, simple line announcing the cancellation up on the official website. It reads, “Unfortunately, due to the rising COVID rates in Austin, the 2021 show is cancelled and being rescheduled for MotoGP weekend in April 2022.” It’s straightforward and directly to the point.

Meanwhile, the Progressive IMS Outdoors NYC announcement on Instagram and Facebook begins, “As a result of the state of New York’s recent decision to enforce proof of vaccination and rapid testing for public events of scale, we have made the difficult decision to cancel the New York event. This is a choice that we firmly believe is in the best interest of our attendee and exhibit communities for both their safety and event experience. Attendees that have already purchased a ticket will be fully refunded within 7 to 10 days.”

It then goes on to say that Progressive IMS Outdoors organizers believe that the other events on the 2021 schedule will remain intact, not because of anything to do with the virus but because they have “less restrictive health and safety mandates.” Organizers then suggest that New York area people upset by this decision go to the Pennsylvania event in September instead, which is approximately three hours away.

As riders, we know and understand that there are inherent risks that come with our enjoyment of motorcycling. None of us—no matter to what degree we may otherwise laugh in the face of danger—signed up for this virus. It’s frustrating, it’s stressful, and it’s terrible—but it’s also unfortunately very real.

According to the Johns Hopkins University Coronavirus Resource Center, as of August 9, 2021, a total of 616,928 people have died of COVID in the U.S. alone. Globally, we’re closing in on 4.5 million people who have died as a result of this virus. That’s not counting the people with long COVID, who may have lived to tell the tale, but who may possibly feel the virus’ effects on their bodies for the rest of their lives. It’s horrifying, it’s scary, it’s maddening—it’s a lot of things, and none of them good. Shouldn’t the safety of those we care about be our first priority?